After an exciting opening weekend of rugby with plenty of tries scored, here are the 15 players that stood out across the games:

1. Jack McGrath – For a man with less than 10 caps to his name and in the absence of one Cian Healy, Irish fans could be forgiven for being a little nervous coming into this game. They needn’t have worried. Although the Springboks did mostly have the ascendancy in the scrum as expected, the young Leinster prop held up well, with the Irish front row even gaining a scrum penalty in the second half. While not as dynamic a carrier as Healy, McGrath was not short of effort in this department and racked up more than 15 tackles to help his side gain a massive victory.

2. Richard Hibbard – No particular stand outs at hooker this week, Dylan Hartley threw well and made plenty of tackles while he was on, Sean Cronin was solid if not making some of his normal barnstorming runs, so this one goes to the Wales forward who got on the scoresheet and also made all of his lineout throws.

3. Owen Franks – A good shift for the New Zealander at Twickenham. The younger Franks brother was solid at set piece, tackled well and is one of the better front rowers in the world for getting his body over the ball to either win turnovers or disrupt the opponents’ supply of quick ball. Made some nice carries in the second half too.

4. Johnny Gray – A toss-up between the two brothers. Obviously a bit of sibling competition does them good, with both scoring in the big win over Argentina. Scotland will be delighted to have these two young forwards playing well (and importantly crossing the whitewash!) for the November series and on into next year. We’ll go for Jonny here as the younger of the two. Alun Wyn-Jones scored in a losing effort at the Millennium stadium but was also partially at fault for Kuridrani breaking through for a try. Ireland’s Devin Toner continues to improve and showed some nice hands for such a big man on a couple of occasions but couldn’t quite match the power of the Springbok forwards.

5. Paul O’Connell – Some players get older, O’Connell just gets better! The Munster legend was right in the thick of things in what was a huge effort to subdue the massive South African pack. Claimed ball at the lineout and from restarts very effectively and was huge in the tackle. His partnership with Toner is coming along really well, with both players offering contrasting styles.

6. Jerome Kaino – The first of an All Black back row trio, the Auckland blindside is showing shades of his 2011 form, putting in big tackles everywhere and carrying for more yards than both Robshaw and Wood combined. As with many great 6’s over the years, he quiet goes about his job really well without getting the plaudits of his other back row colleagues. Honourable mention for Rhys Ruddock, who started as a late replacement for Chris Henry, he showed that we could see a lot more of him on the international stage and also bagged a try.

7. Richie McCaw – He just doesn’t stop does he? An absolute menace if there’s the tiniest chance of slowing the ball down for the opposition or a whiff of a turnover. While he is getting pinged a bit more frequently by refs these days, he is the best in the business at playing to the absolute limit of the laws at the breakdown and wrote the book on leading by example. Lesser teams would have crumbled when they had a man in the bin late in the game, not a team with this man at the helm.

8. Kieran Read – Pure class. Perhaps all the talk of Duane Vermeulen being the best 8 in world rugby got to him, but Read again showed why he is so valuable. Apart from all the tackles and work that he does at the breakdown, he must be the most mobile and skilful number 8 around right now. Just when you think he can’t possibly offload out the back when the rain is driving down and the defence is right on him, he does. If the kiwis can keep these 3 fit and in form for the World Cup it’s hard to look elsewhere for the winners.

9. Greig Laidlaw – The Scottish captain led from the front, with a hand in 3 of his teams tries and 14 points with the boot. A mention for Conor Murray who had yet another classy game this season against the Springboks, clearing up loose ball and kicking well, particularly for Tommy Bowe’s try. Aaron Smith was a go-to man for his team as usual.

10. Jonathan Sexton – A man of the match performance for the Racing Metro Fly-Half, Sexton kicked all his goals in Dublin, silencing a lot of the critics of that part of his skill set. Quite apart from that though, he showed once again why he is the number one No. 10 in the Northern Hemisphere with his assured game management and excellent running game, he put the 2nd ranked team in the world to the sword.

11. Teddy Thomas – Three tries on debut, albeit against a weak Fijian defence, is enough to seal a place for the young flyer. Philippe Saint-Andre will be hoping he continues this sort of form into the Australia game to start building a more consistent French side as the World Cup approaches.

12. Sonny Bill Williams – By his own standards SBW would readily admit this wasn’t his best performance, with a poor defensive error helping Jonny May round Conrad Smith for England’s first try. However as the game wore on, the offloading, pace and power we’ve come to expect from him really told and let’s not forget he’s only been back in Union for about 2 months.

13. Tevita Kuridrani – The big Brumbies centre has been in outstanding form in recent months. In Cardiff on Saturday he continued where he left off against the Barbarians with another try from a storming line break and step off his left which left the Welsh defence clutching at thin air. He didn’t shy on his defensive duties either with 10 tackles made.

14. Tommy Bowe – One of the most consistent performers in a green jersey, Bowe rarely has a bad game. Sean Maitland was impressive for the Scots, but for the Ulsterman’s good work under the high ball,  excellent kick chase and a try to boot, he claims the 14 jersey.

15. Scott Spedding – A touch harsh on Rob Kearney, who was his usual imperious self when South Africa were raining down kicks on him in Dublin, Spedding had to get the nod for his all round game. On debut, along with fellow back three player Teddy Thomas, the South African born Spedding set up tries, made metres and tackled hard. It was nice to see him back up the emotion of  his call-up during the week with a really strong showing on the pitch. 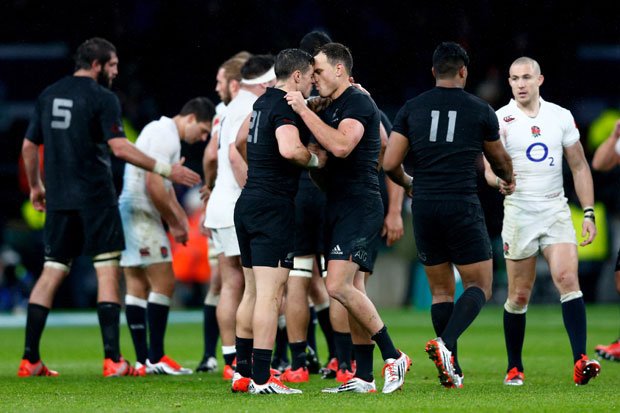