Portland, OR– This season the Portland Trail Blazers have had an incredible start. After the first four weeks, only three losses show on their overall record and injuries are no longer a determining or detrimental factor in the progress the team makes.

Portland ranks in the top ten in four major categories–points, rebounds, assists, and points allowed (all per game). Sixth in points, fourth in assists, seventh in points allowed, and first place in rebounds per game (48/game).

The reason for this is simple–box outs. Also, at 48 per game, this means the Blazers are averaging at least one rebound every single minute of the game.

Contests against the Charlotte Hornets and Memphis Grizzlies outline their body of work for Thanksgiving weekend. While the Hornets sit at 4-11, they are a dark horse that usually brings their A-game to every competition.

Kemba Walker and Lance Stephenson are trying to build  a championship mindset courtesy of owner Michael Jordan, who knows a thing or two about winning championships.

Damien Lillard is trying to do the same thing up north in Oregon.

Last season, Lillard started an epic household name legacy by knocking in a three pointer at the buzzer to knock off the Houston Rockets in the first round of the Western Conference Playoffs. Although Portland got completely manhandled by the Spurs, keep in mind that the eighth-seed Dallas Mavericks were the only team to take San Antonio to the limit of seven games.

So what does that mean? It means this: the West is anybody’s game. And while old-timers may seem like they’re in constant control, the boys in black and white are ready to steal center stage.

If the season (hypothetically, of course) were to end right now, Portland would be the three seed out of the West, just behind Golden State and Memphis and followed closely by Houston. But only a half game separates them from stealing second place from Steph Curry and the Warriors and a single game is the measly distance between the Trail Blazers and the first-place Grizzlies.

And trust me, Damien Lillard & Co. are nowhere near done proving the haters and critics wrong.

In fact, they’re just getting started. 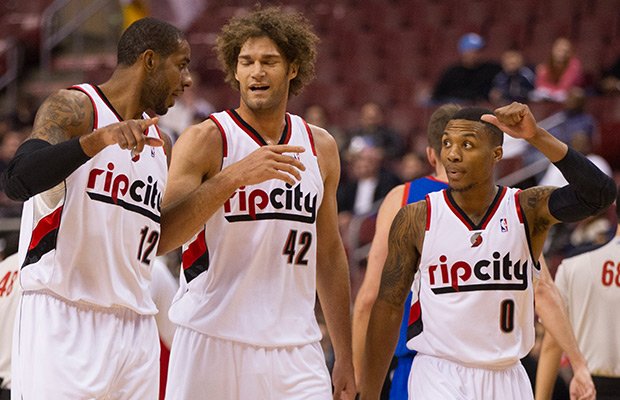