You probably looked at the title of this and rolled your eyes. The Dallas Cowboys and Cleveland Browns are for real? Yeah right.

Make no mistake about it: these two teams have proven that they can make the playoffs this season. They are for real.

Coming into Sunday’s game at the defending Super Bowl champion Seattle Seahawks, the Cowboys were 4-1. Their wins had come against the Tennessee Titans, St. Louis Rams, New Orleans Saints and the Houston Texans. Not exactly top competition. However, even after going down 10-0 early, Dallas did not panic. Even after Tony Romo went down with an apparent injury, Dallas did not panic. Instead, they stuck with a familiar formula: feed running back DeMarco Murray the ball. The best back in the NFL so far this season, Murray ran for 115 yards – his sixth straight 100+ yard rushing game – and a late touchdown that helped lift the Cowboys over the Seahawks.

Their defense, normally one of the worst in the league, harassed Russell Wilson all day. He only completed 14 of his 28 passes for 126 yards and was sacked twice. At the end of the game, Rolando McClain intercepted a Wilson pass that ended the game. After winning IN SEATTLE 30-23, Dallas is now 5-1 and tied with the Philadelphia Eagles for first in the NFC East. Believe it or not, Dallas is also tied with Philly and the San Diego Chargers for the best record in the league.

Meanwhile, in Cleveland, the Browns have proven they are for real as well. The previous week, down 28-3 to the Tennessee Titans, Brian Hoyer led the Browns to the largest road comeback in NFL history as Cleveland won 29-28. Hoyer has continued to prove himself as he led the Browns to a huge win over their AFC North rivals, the Pittsburgh Steelers, 31-10. The return of running back Ben Tate only makes Cleveland even stronger, and at 3-2, they’re right behind the Baltimore Ravens (4-2) and Cincinnati Bengals (3-1-1) in that division. Even in their two losses this season, the Browns were very close to pulling out victories.

Many thought Johnny Manziel should have gotten the starting quarterback position over Hoyer, but Hoyer is the real deal and has proven it time and time again. If you need any more convincing that Cleveland is a force to be reckoned with, here’s a little food for thought: the Browns are third in the NFL in rushing yards per game with 146.4, only behind Seattle and Dallas.

It’s a nice change of pace for two franchises that have been riddled with mediocrity for a long time.

Dallas has not made the playoffs since 2009, when they lost in the divisional round to Brett Favre and the Minnesota Vikings. For the past three seasons in a row, they have finished 8-8. Each year, the team promises to be better than the previous year, and each year, they have failed to do so. Until this year, that is.

Everyone who is a football fan knows just how much Browns fans have suffered for years. In the past 20 years, they have only made the playoffs twice: in 1994, they finished 11-5 and lost in the divisional round to the Steelers. In 2002, they finished 9-7 and lost in the wild card round to the Steelers. They have not had a winning season since 2007, when they went 10-6 but missed the playoffs.

With winning records, talented rosters and extremely excited fan bases, the Dallas Cowboys and Cleveland Browns are without a doubt the top two surprise teams this season. Keep an eye out for both of them, as they could both be playoff teams come January. 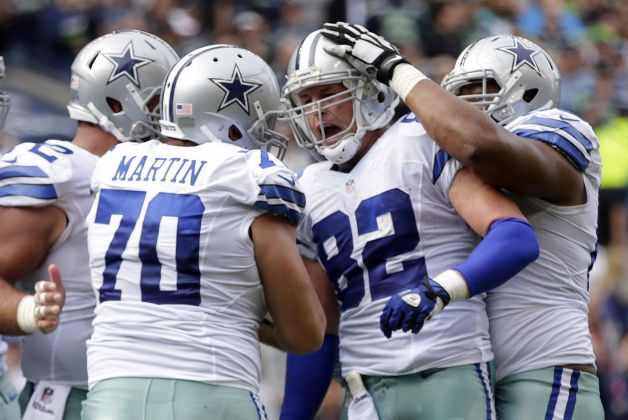