Regardless of your opinions on the new European rugby tournament, you have to admit that this week brought us the excitement and skill that we rugby fans love about our sport.

Gloucester put on a clinic in the opening game of the Challenge Cup, beating their French rival, Brive, 55-0, on  the back of seven tries. Charlie Sharples was the man of the match with several scything runs and a hat trick to his name. Union Bordeaux fought hard against Edinburgh, yet ill discipline in the last ten minutes of the game led to the penalty try which gave the Scottish team the victory, 15-13. Despite running in three tries of their own, the Bucharest Wolves’ defense crumbled under the seven-try onslaught of Newcastle in their 43-19 win.

In a game of ebbs and flows, Lyon pulled away the victor. Shortly after halftime, the London Welsh were able to pull the game within 3 after a Tristian Roberts penalty goal, but a 64th minute try by the Fijian Waisele Sukanaveita sealed the Welsh’s fate, 28-18. Five try Cardiff Blues dominated their match against Grenoble, 37-14.

A last-minute try by Louis Marrou of Grenoble made the scoreline more respectable. Zebre and Oyonnax played a tight game that reached the final ten minutes with Zebre leading 24-23. Fabien Cibray darted across the try-line for the go-ahead try for Oyonnax at the 71st minute, and Regis Lespinas sealed Zebre’s fate with a last-minute penalty goal to win 33-24.

Connacht secured a bonus point victory against La Rochelle, 48-12. While showing determination and glimpses of skill, La Rochelle were not able to overcome their 29-5 halftime deficit. Exeter began their 2014 Challenge Cup campaign against Bayonne with pace, leading 16-3 before the 20th minute. But Bayonne showed composure by running in two tries to lead 17-16 at the break. From their, the match swung back and forth until a 77th minute try by Lisiate Fa’aoso put Bayonne ahead for good, 30-24.

26 minutes into the Stade Fracais-Dragons match, Stade held the lead thanks to four penalty goals courtesy of Vincent Mallet. Newport Gwent Dragons came back in the latter part of the first half thanks to tries by Richie Rees and Rhys Thomas. The second half provide a close affair, with Hallam Amos and Meyer Bosman trading tries, but the boot of Angus O’Brien and a final try by flanker Nick Chudd provided the Dragons with a bonus-point victory.

The London Irish rounded out the first week of the Challenge Cup with a 70-14 thrashing of the Italian outfit Rovigo. Topsy Ojo secured a first half hattrick, while his teammates made the most of their chances running in seven more tries.

At the end of week one, we have some clear favorites with Gloucester, London Irish, and Connacht securing convincing victories. Next week will see them face more stout opposition. Only then will we be able to see who are the top sides in the inaugural Challenge Cup. 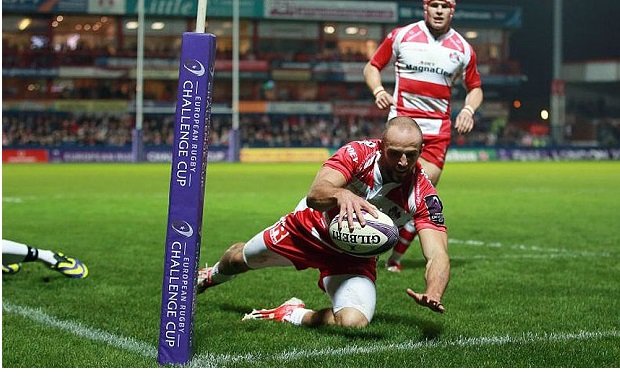