It’s been two weeks since my last Fast Break column. There’s plenty of more topics to discuss. Toronto and Memphis are good while Oklahoma and the LA Lakers are bad. This should be a fun season. Any comments/suggestions, leave them below. I would love to hear what you would like me to write about.

You would figure a month into the season, the Cavs would have things figured out a little more than they do. They have been wildly inconsistent. They are near the bottom of the league rankings in every defensive statistic. Meanwhile, their offense has been middle of the pack. Kevin Love has been hit and miss while Kyrie Irving doesn’t know how to get his teammates involved. LeBron James was quoted as saying this is the biggest test he has had as a player.

Even with all of this going on, I wouldn’t take too much stock into it (even though it is getting closer to that point). Teams don’t come together over night. This reminds me of when LeBron James and Chris Bosh signed with Miami in 2010. Everyone had all these great expectations and the team struggled out of the gate. The Heat ended up at 9-8 on November 27, 2010. Those guys had to have a player’s only meeting and managed to reel off 12 wins in a row.

While this is different, it is also similar. I expect them to make a run sooner rather than later.

Meanwhile, at the top of the Eastern Conference, there is a team playing some great ball. The Toronto Raptors have been on a tear this season. Since the last time I wrote this column, they have gone 4-1, bringing their overall record to 10-2. Their only loss was at home to the Bulls. Kyle Lowry has been on fire lately. The combo of Lowry and Demar Derozan (20.0 PPG, 4.3 RPG) could make a claim to being the best backcourt in the league (18.3 PPG, 5.8 APG, 5.0 RPG). Their big men have been solid all season long. They have also have had nice bench production from Terrence Ross and James Johnson.

I’m not sure if they will be able to do this all year, but they should have no problem winning their division. They play in a weak Atlantic with no challengers in sight.

This is their 20th season marking a yearlong celebration. A couple of nights ago, they gave Vince Carter a video tribute and a standing ovation when he returned with the Grizzlies. I’m glad Toronto is finally getting a chance to shine and it was real cool to see them do that for Vince.

Sitting just 1.5 games behind the Raptors are the Washington Wizards (8-3). They just received a major boost to their lineup with Bradley Beal returning from a broken wrist. He’s one of the best pure shooters in the NBA right now and gives the Wizards another big time scoring threat. Wednesday, in his first game back, he came off the bench and scored 21 points.

I’m almost ready to call John Wall the best point guard in the NBA right now. He has always had more speed than a cheetah tracking down a hyena. John Wall consistently dictates the pace of the game and his mind is trained to find an open teammate first. The improvement he has shown in the past three years has shown up in his stats (19.5 PPG, 9.1 APG, 4.3 RPG 2.5 SPG) and the win column.

I’m impressed that the Wizards were able to do so well without Beal. Now that he is back I think the Wizards will have staying power atop the East standings. They should make some real noise.

The West Is The Best

From top to bottom, the West is way better than the East. As I see it, there are twelve teams that could claim a playoff spot.

That’s including 3-11 Oklahoma City Thunder. Some people may disagree with me but I’m going to give them the benefit of the doubt for now. I want to see what they look like a month.

Memphis, Golden State, Portland, Houston, San Antonio, Dallas, LA Clippers, Phoenix, New Orleans, Sacramento and Denver all have a chance as well. The race for the last couple seeds should end up going to the final day of the season. We should get some great playoff battles as well.

The Memphis Grizzlies (11-2) have surprised me. I didn’t think they would be the best team in the conference this far into the season. They are always a tough team. They play that Grit n’ Grind style behind Zach Randolph’s scoring and Mike Conley’s playmaking. There are rumors out there that Marc Gasol will be a primary target in San Antonio in free agency. They better hope they make a run this year and Gasol stays put because he’s a big part of what they do.

My Portland Trailblazers (9-3) are looking real nice after coming out the gate a little slow. Even with Nicolas Batum sitting out four games, the Blazers are on a six game win streak. Damian Lillard and LaMarcus Aldridge have picked up where the left off last year. The biggest improvement is the fact that we have bench production. The Blazers bench was historically bad two seasons ago. Chris Kaman (10.7 PPG, 6.6 RPG) has given us low post scoring and Steve Blake has been a steady veteran presence, as usual. The Blazers have had great offense in the past but now we have the defense to go along with it. They are ranked in the top 6 on both ends of the court.

The Sacramento Kings (7-5) are playing the role as everyone’s Cinderella story. Demarcus “Boogie” Cousins was once considered too volatile and undisciplined. He was a knucklehead. Rudy Gay was garbage for the Raptors a couple years ago. Too overpaid and bad production. Together, they have formed a nice 1-2 punch. Boogie has been on another level and should be a no-brainer All-Star this season. He has some of the nicest post moves in the league. Rudy Gay has been a big-time contributor, taking smart shots and making them. It’s worked out for him so far. He just signed for $40 million the other day. The Kings will be in the hunt this season (especially if Oklahoma misses out).

This argument is ridiculous to me. People have been debating for the past week whether or not the Phliladelphia 76ers (0-12) could take the Kentucky Wildcats. There is no way a college team would beat an NBA team unless you went back to the days of John Wooden at UCLA. Wooden had game changing players Kareem Abdul-Jabbar (1966-69) and Bill Walton (1971-1974) during that time period. As far as modern teams, possibly the Fab Five at Michigan (NBA players Chris Webber, Juwon Howard and Jalen Rose).

Most of the players on Philadephia’s roster were college stars. They wouldn’t be in the league if they weren’t. As sad as the Sixers are, they have a small amount of talent. Nerlens Noel was destroying the SEC in the blocked shots category two years ago. Michael Carter-Williams can’t shoot but he can run a team and is a tall, lanky matchup for any opposing guard. Tony Wroten has been a 20 PPG scorer this season.

I like what I seen out of Kentucky when they beat Kansas. They have great depth that they can throw at you. However, I’m not convinced they have a go-to scoring option. Karl Anthony-Towns looks like a legitimate defensive presence but he is raw. He’s going to get drafted on hustle, height and potential. Would the Harrisons (Andrew & Aaron) have success against MCW and Wroten?

The answer is NO. Not even a debate.

Kyle Lowry has been steady as they come the past two weeks. Like I said above, the Raptors are sitting atop the East. Lowry is the driving force behind that. On Wednesday night, the Grizzlies came into the T-Dot giving us a matchup of the top team in each conference. It went down to the final seconds where Lowry ended up hitting the game winner with eight seconds left. Ice-cold.

He has an attitude that I like. He reminds me of one of those ankle biting dogs. Maybe a Chihuahua or a Daschund? As soon as you walk in the door the little dog is at your ankle, barking. You kick the dog away and what does it do? It comes back at you. The harder you kick those dogs, the harder they come at you. That’s Kyle Lowry.

Minnesota will be unwatchable most nights, but really fun  on others.

Derrick Rose will miss more games than he plays.

Phil Jackson will be hiding out in Montana under a different alias by the end of the season. 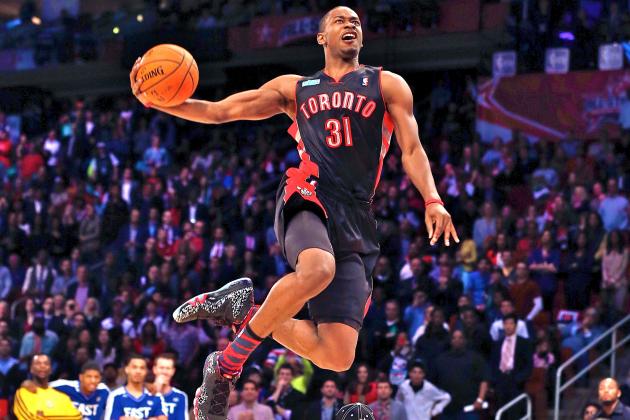