With the 22nd overall pick in the 2014 NFL Draft, the Cleveland Browns select….. Johnny Manziel.

The Browns moved up 4 spots from where they were originally slated to pick to grab none other than Texas A&M star Johnny Football.

In the time since, Cleveland has been making headlines all over the sports world. The selection of Manziel has effectively put the Browns back on the map.

The hype surrounding Johnny Football is nothing short of surreal. He was a superstar in college, and he achieved the feat of becoming the first freshman to ever win the Heisman Trophy.

According to CBS Sports.com, over his two years at A&M Manziel recorded 7438 passing yards with a ratio of 59 touchdowns to 22 interceptions.

That comes to an impressive 88 total touchdowns in two years. Wow.

He even handed the Alabama Crimson Tide (who were ranked #1 in the country at the time) their only loss of the season.

Alabama later went on to win the National Championship that same year.

There is no doubt that this kid was special in college, but one can’t help but wonder if his game will translate to the NFL.

When it comes to rookie quarterbacks in the NFL, there are generally two approaches a coaching staff will take:

A.) The team will make the decision to sit their rookie for a year, allowing him to adjust to the NFL and learn from the veteran quarterbacks.
OR

B.) The team will allow the rookie to compete for the starting job immediately, and if he proves himself ready, the team will throw him right into the fire week one.

The latter is where new Head Coach Mike Pettine and the Cleveland Browns find themselves.

Since the moment Manziel was drafted, there has been clamor from around the country for Johnny to start. People want to watch the excitement that number 2 can bring to a football game.

However, just days after Manziel was drafted; Cleveland Browns owner Jimmy Haslam informed the local media that he and Head Coach Mike Pettine told Johnny Manziel to “act like a backup.”

In the time since the draft, both GM Ray Farmer and Coach Pettine have continuously reinforced at various meetings with the press that it is veteran quarterback Brian Hoyer’s job to lose. After the Brown’s first two OTA’s, Manziel has taken reps with the third team offense.

As one could imagine, this had created quite the stir in the national media.

The article goes on to question if the Browns can even handle the budding star. It is safe to say that the national media is not on board with the Browns decision to list Johnny as the back-up in early May.

So, is the national media right? Can the Browns handle the Johnny Football circus? What are the Browns thinking?

Everybody needs to take a big step back and BREATHE.

We are in May people.

The Browns have only held TWO OTA’s so far. Doesn’t it make a little sense that the Browns would let Hoyer take snaps with the first team?

He is the veteran quarterback on the roster. He knows the playbook, and he earned the right to be labeled as the starter due to impressive play last season, even if it’s just for now.

Manziel didn’t even have a playbook during his time as an Aggie. Head Coach Kevin Sumlin simply changed the game plan depending on the matchup.

It is extremely challenging for a rookie quarterback to learn a new offense. Manziel needs time to learn the playbook, get acclimated with the different formations, learn the new terminology, gain feeling for how his teammates operate, and above all else, he needs to feel comfortable.

The change from college to pro is a daunting task.

There are so many moving parts that go on behind the scenes that fans will never see. At this point, the Brown’s simply want to slow things down for the rookie quarterback.

Being a rookie in the NFL is hard enough already, and Manziel doesn’t need any extra pressure at the moment. What is the first step in building a house? You lay the foundation. That is exactly what Pettine is doing with Manziel.

He is simply giving him a foundation to build from.

Regardless of whether Manziel is the week 1 starter or not, this much is clear: There is no need to over-analyze Manziel not taking reps with the first team.

There is no hurry at this point to move him along. The Browns have 109 days until their week one matchup with the Pittsburg Steelers.

If Pettine feels Manziel is ready at that point, he will lead Cleveland into Heinz Field.

For now, let’s just have some faith in the Browns coaching staff, and rejoice in the fact that Johnny Manziel is a Cleveland Brown. 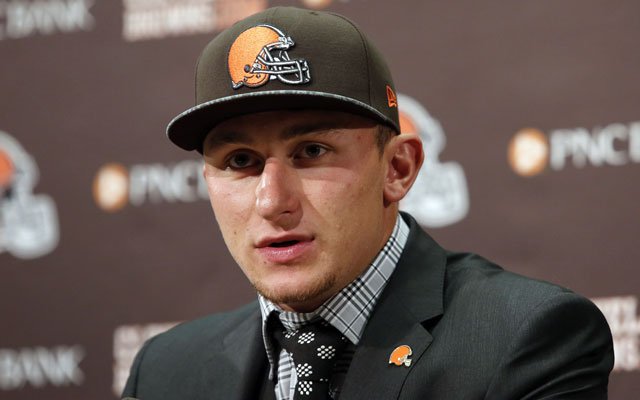