Eugene, OR– This season is unlike any other season we have seen in a long time in regards to College Football. Underdog teams like TCU and Baylor have not only made their compelling case for a chance at the title but they’ve made noise in the respect that they can still play the grand spoiler if things don’t go as planned.

But don’t let the Ducks of Oregon fool you. They’re for real.

After falling out of the top four following their last second Hail Mary loss to Arizona, Oregon QB Marcus Mariota showed scouts and those involved in football at any level that anything is possible.

What’d he do? He brought his squad back.

Now definitely returned to the final four picture that will play out at the conclusion of this season, the Oregon Ducks (Current #2) will try their best to climb the only spot they don’t have–number one.

The way that the Inaugural College Football will play out is as follows:
#1 vs #4
#2 vs #3
*The winners of these games will meet in the National Championship Game.

Here’s what it looks like with the blanks filled in:
Alabama vs Mississippi State
Oregon vs Florida State

Both of these games will provide unforgettable action for the player and also for the fans. Personally, I can’t wait to see things get really heated between some of the best players in the country.

Marcus Mariota’s case for the 2014 Heisman trophy includes the following:
-Led Oregon back into title contention after shocking loss to Arizona
-Has a QBR of 184.6 according to ESPN
-Has totaled nearly 3,000 yards
-He’s been involved with 29 TD while throwing only 2 INTs
-Has a completion pct. just under 70%

The only thing he hasn’t done is win the National Title in sweeping fashion.

And yeah, you should expect that on his personal bucket list. 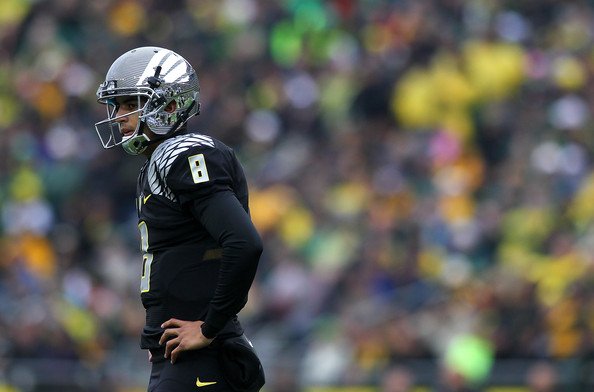