Sell High on Julius Thomas. Yes I said it. Now is the time to move Julius Thomas. I know you are thinking its crazy to consider shipping out one of the elite players who can single handily win a week for you, but hear me out. You should sell Julius Thomas (and trust me, someone in your league will give you premium value for him).

This article actually started as a recommendation to buy low on Julius Thomas following his 3rd straight poor performance:
“Buy low on Julius Thomas. Against San Diego, Julius only had 2 receptions for 23 yards and 6 receptions for 50 yards in his last 2 games, but he is a matchup nightmare and one of Peyton’s favorite targets. Peyton will continue to keep everyone happy in this prolific offense by spreading it around.”

A closer look into this season’s statistics shockingly reveal just how touchdown dependent he is. In Denver’s offensive juggernaut, Julius Thomas has a relatively small role (and it has been getting smaller). Thomas is the redzone threat. Now if you are going to have a niche role, this is the role you want, especially with Peyton Manning. The problem is touchdowns are fluky and tough to rely on. They come in waves and can disappear without warning.

Why would you ever want to give up the #3 ranked tight end (standard scoring)? The numbers say it all.

Julius Thomas currently has 86 points (CBS standard scoring). Following Julius Thomas are Martellus Bennett and Greg Olsen with 83 and 80 points respectfully (in PPR they are both well ahead of Julius Thomas). Even more telling is that they have each been targeted over 20 more times this season. In his last 3 games Thomas has only 10 receptions for 101 yards and 2 touchdowns (both came 3 weeks ago against the Jets). Thomas’ touchdown and fantasy production is unsustainable unless he starts receiving more targets, and that is highly unlikely since he is sharing the field with Demaryius Thomas, Wes Welker, Ronnnie Hillman, and Peyton’s favorite new toy, Emmanuel Sanders. Add in that since the bye week (4 games) Demaryius Thomas and Emmanuel Sanders have combined for 9 touchdowns and 926 yards (pre bye 175 yards and 1 touchdown).

We can see that while the targets have been consistent at an average of 6 per game, his receptions, yards and touchdowns are regressing. Meanwhile, Rob Gronkowski and Jimmy Graham are both averaging 8 targets per game and this includes games where both have played injured. When healthy, both Graham and Gronkowski have averaged 10 targets per game.

The reason to sell high on Thomas now is that his perceived value is much higher than his actual value. Julius Thomas is viewed as one of three elite tight ends. In reality he doesnt match up. Jimmy Graham and Rob Gronkowski are the #1 options on their teams while Thomas is only the 3rd option for the Broncos. Graham and Gronkowski also make plays all over the field while Thomas is finding his role reduced to primarily the redzone. Lastly Thomas is a poor blocker and finds himself on the sidelines in key situations. This clearly shows that Julius Thomas should be ranked a tier below Graham and Gronkowski.

This is not to advocate just getting rid of Julius Thomas. He will have some monster games moving forward and there is a large demand for him. The red flag is that the lack of targets and touchdown dependency. The best strategy is to flip Julius Thomas in a one-for-two trade. Try to fill a hole at RB or WR with an elite player and plug-in a replacement tight end. Many of the lower ranked tight ends will not have an upside anywhere near Julius Thomas’s, but an elite RB and consistent TE play will help your team succeed in the long run. 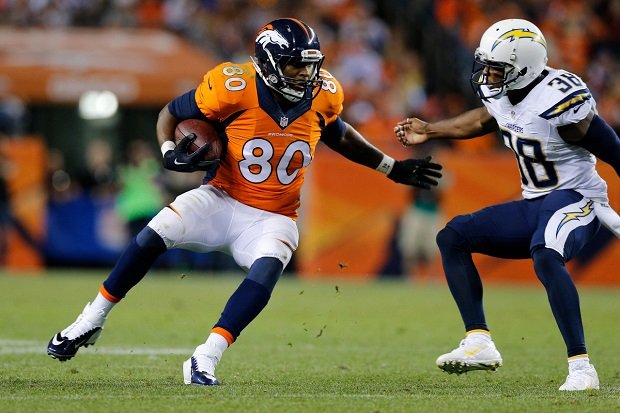