With Brian Hoyer on the hot seat you would expect a breakout game, right?

You would think he would go out and silence the critics. That is the complete opposite of what he did against the Colts. In the three weeks prior to the contest against the Colts, Browns quarterback Brian Hoyer had thrown six interceptions compared to only one touchdown. He continued that trend Sunday against the colts. Brian Hoyer went out and threw two interceptions, compared to zero touchdowns. On top of that only 14 of Hoyer’s 31 passes were completed.

This all-around horrible offensive display really had to be a punch in the defense’s face. The defense managed to force four turnovers, and the offense wasn’t able to produce points off those turnovers.

This has many (and I mean MANY) Browns fans demanding change. Change is exactly what need to happen as of right now. This hurts me to say, because I’ve been defending Hoyer since the game-winning drive in his first start to beat the Vikings, but the Browns do indeed to bench Hoyer for Johnny Manziel.

This isn’t because of what Manziel may be able to do, it is because of the fact that Brian Hoyer has looked like Brandon Weeden’s long-lost cousin playing quarterback. There is no way Cleveland can continue with a guy who the fan base is quickly starting to turn on, when there is a rookie quarterback who has yet to prove himself sitting on the bench.

Johnny Manziel did enter the game against the Bills, in which the Bills already had the game won. He did end up scoring a touchdown, which Brian Hoyer has not done since week 11, but rookie flaws did appear. There were two things that stuck with me from Johnny Manziel’s short time on the field. The first thing was a pass over the middle to Jim Dray, which Jim did catch, but if it wasn’t to the linebacker jumping the route a split second too early, Johnny Manziel would have been picked off.

The second thing was a bad snap from the third string center that sent the ball flying past Manziel. In college he probably would have been able to make a play out of that live ball, but he is so inexperienced and not used to the speed of pro-caliber players he tried to pick up the ball and throw it. This was resulted in a fumble in the end zone that everybody, including Johnny assumed resulted in a touchdown.  The refs saw it differently, which was highly questionable, but I’m not complaining.

Don’t get me wrong, Johnny’s game was great, I just noticed that he cut it close, almost turning the ball over two times.

Flaws are expected from rookies, especially flaws so small flaws like those. It was impressive to see a rookie come out and stay calm, and composed while seeing his first significant time of the season. That is why I think it is best for Browns to send Hoyer to the bench and call for Manziel. It’s not like the Browns are legitimately in playoff contention, so now would be a perfect time to start what some Browns fans call the “Manziel Era”.

It would be a perfect opportunity to give Johnny a chance to feel what it is like to play in rivalry games, since the Browns have both Cincinnati and Baltimore left on their schedule. It would also be a great chance to simply let Manziel build chemistry with his teammates and get used to the offense. There isn’t much left the Browns are playing for, considering it would take a miracle for Cleveland to squeeze their selves into the playoffs.

If I could add one more thing. Stop the “Johnny Football” nickname until he actually proves himself in the NFL.

For now he has a last name, which is Manziel, not football. 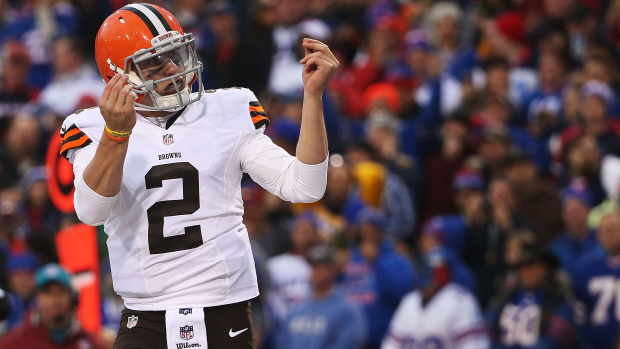