In the last decade, 24 different nationalities have appeared on a Tour de France stage winner’s podium.

Below lists of those 24 nations, the number of stages they have won, and how many different riders of that nationality have won those stages.

Of the 24 different nationalities, there are only three non-European teams, with Australia (12), Colombia (9), and the United States of America (1).

The graph also shows the average age of the riders who have won stages – France, for example, has had 26 stage wins, won by 14 different riders.

The average age of those stage winners is 26.8, with the majority of those wins coming in 2012 and 2017 (5 each), mainly thanks to Thomas Voeckler and Warren Barguil (2 each), who were 33 and 25 years of age, respectively – those specific stage wins were also mountain stages.

Germany has amassed 33 stage victories in the last decade, with Marcel Kittel having taken seven stage wins – he was one of six different Germans to win a stage at the Tour de France.

This is followed by Great Britain with 32 stage wins, Mark Cavendish bringing in the majority of wins for the Brits, where he was one of seven different riders to win at least one stage.

In the top 10 of nationalities to have won stages, only Slovakia has had one sole winner – Peter Sagan, whereas countries like Australia (6), Belgium (7) and Colombia (6) have greater strength in depth.

Where the average age of a Tour de France stage winner is 27.4, only Slovakia, the Netherlands and Colombia are in the top 10 countries to win the most stages in the last decade, who also features in the youngest average age of winners to fall below 27.4.

South Africa’s Daryl Impey has been the oldest winner in the last decade, at the age of 34 in 2019.

As will be discussed later, one of the reasons that Spanish stage wins have faltered in the last decade is the average age of their winners – 31.3.

This could also help explain the state of affairs with the Germans (28.5) and Great Britain (29.3) – the majority of their stage wins have come from sprints (Greipel, Kittel and Cavendish have 40 stage wins between them since 2010) – the types of stages that are being won by slightly younger riders (27.4 on average, and 26.1 based on the last three editions).

Italy have had an average age of their stage winners at 28.4, so may have to turn to experienced riders such as Matteo Trentin (31) or younger riders such as Giulio Ciccone (26) to squeeze out stage wins in the near future.

Belgian riders, on average win stages at the age of 27.6 – Wout van Aert has already won three stages, and he’s still only 26. Dylan Teuns, who beat the Ciccone to the line in stage six of the 2019 Tour, is now 29 years of age.

And the country has seen some enormous young talent coming through; we can expect to see the likes of Remco Evenpoel, Jasper Philipsen and Mauri Vansevenant start adding to Belgium’s count in the next few years.

Although Australia’s average age of stage winners is 27.4 (including the three names above), of their last nine stage winners, that average age is 25.4, and have only been won by two men, Michael Matthews and Caleb Ewan; both men won stages at the ages of 25 and 26, and one would expect Ewan to continue winning sprints on flat stages.

France has registered an average age of stage winners at 26.8 in the last decade – world champion Julian Alaphilippe has won five stages in the last three years and will be 29 by the time the next Tour de France comes along at the end of June this year.

Nans Peters won his first stage last year at the age of 26, Alaphilippe is always a good shout for a stage with mountains, and the likes David Gaudu (24), Anthony Turgis (26) and Benoit Cosnefroy (25) bring young and fresh legs to the French cycling scene.

He did win another – the prologue in Liege two years later, but Swiss riders have not won a stage since 2013 – until last year.

Take Spartacus’ protégé, and client, we have Marc Hirschi, and the Swiss found another stage winner.

22 at the time, only Pogacar was a younger stage winner than he was in last year’s edition. In addition, not too many 22-year-olds win stages at the Tour de France.

Since 2011, only three other riders (Sagan and Thibaut Pinot – both in 2012) were 22 or younger (Pogacar) than Hirschi when he won the 218km hilly stage of stage 12 last year, his first-ever pro win; he was also second to Alaphilippe on stage two.

Given his strengths (and his new team’s strengths at Team UAE) – he attacked with just over 28 kilometres to go on the final ascent of stage 12, and then won La Fleche Wallonne 20 days later – so he clearly likes the hillier terrain, he will continue to be Switzerland’s hope for stage victories in upcoming Tours.

As it was alluded to earlier, cycling is a landscape that changes, and individual countries go through phases of having strong (and enough) riders who can pull off a win.

For example, no American rider has won a stage since Tyler Farrar on July 4th 2011, and – despite winning 32 stages in the last decade, no British rider won a stage in 2014 nor last year.

That can be compared to a recent resurgence by Belgian riders, earning three victories in 2019 and two in 2020.

Other countries detailed below have also seen their riders recently step up (back) onto the podium.

Australia, for example, won their first stage in 1982, went eight-year without before their next victory in 1991 – since 2002, they have picked up 30 victories, with 13 coming in the last decade.

These comparisons can also be made with Slovakia’s Peter Sagan’s 12 victories in the last 10 years.

Slovenian stage winners, rather than riders, are the newest additions to Tour de France stage victories – Primiz Roglic being the country’s first stage win at the Tour in the 2017 edition.

The country may not have registered any victories in 2019, but the 2020 version saw Roglic and Tadej Pogacar add to that tally with four stages.

This is in contrast to some of the better-known cycling nations and their cyclists, who have, to say the least, been inconsistent.

They then had three individual years between 1993 and 2004 where they picked up no victories, and in the eight years between 2006 and 2013 had not one win.

Between 1999 and 2012, Spain recorded 38 stage victories – not one nation did any better, and that was only equalled by the French at that time.

In the eight Tour de France editions since then, however, the Spanish have only won five stages, three of those coming in 2015, where the average age of their winners was 35.7.

In other words, that Spanish era of dominance came to an end, although the ever-young Alejandro Valverde (who won stage 17 to Peyragudes in 2012 at the age of 32) is still around.

2016 saw Ion Izagirre win the penultimate stage to Paris (Morzine), while Omar Fraile is the only other Spanish rider to win a stage in 2018. 2019 and 2020 have registered blanks for the Spanish riders.

After last winning in 2009, the Danes have had a very quiet period before picking up a victory in 2018 (Magnus Cort Nielsen) and two last year, thanks to Soren Kragh Andersen.

Poland could also be described as newcomers – registering their first victory in 1993 – they then went 20 years before Rafal Majka won two stages in 2014, and his third in 2015.

Portuguese riders registered two victories in 1969 and another six between 1973 and 1989. Like Poland, that was followed by 20 years of no Portuguese stage winners in France.

Sergio Paulinho broke that duck in 2010 before former world champion Rui Costa won his first in 2011 and added two more in 2013 – all of which were classified as mountain stages.

So what does all this information mean for the upcoming Tour de France that starts on June 26th?

The one rider everyone will be looking forward to watching in his first Tour de France is Mathieu van der Poel (26).

He was the winner of the Tour of Flanders last year, second in that same race this year, winner of Strade Bianche in 2021, and some sensational efforts in both Belgium (Kuurne-Brussel-Kuurne and E3 Harelbeke), two-stage wins in Tirreno-Adriatico and another two stages in the Tour of Switzerland.

He noted on Sunday, six days before the start of the Tour in Brest, that he simply had ‘an off day as he climbed of his bike and failed to finish the Dutch Road Race Championships.

However, he recently said in an interview that one of his goals this year is to wear the yellow jersey, something his maternal grandfather Raymond Poulidor wasn’t able to achieve during his career.

And when the younger of the van der Poel brothers sets a goal, it’s hard to stop him.

His main adversary both in the field and the road of late, van Aert, became Belgian road race champion for the first time, and that after surgery to remove his appendix and losing one of his closest friends to cancer.

Van Aert also became the first Belgian to be crowned national champion in both the field and on the road; he will be the first rider since Yves Lampaert to wear the Belgian tricolour at the Tour in 2018.

Throw into the mix Julian Alaphilippe, who will be the first Frenchman to wear the rainbow jersey donned by the World Champion at the Tour de France since Laurent Brochard in 1998. 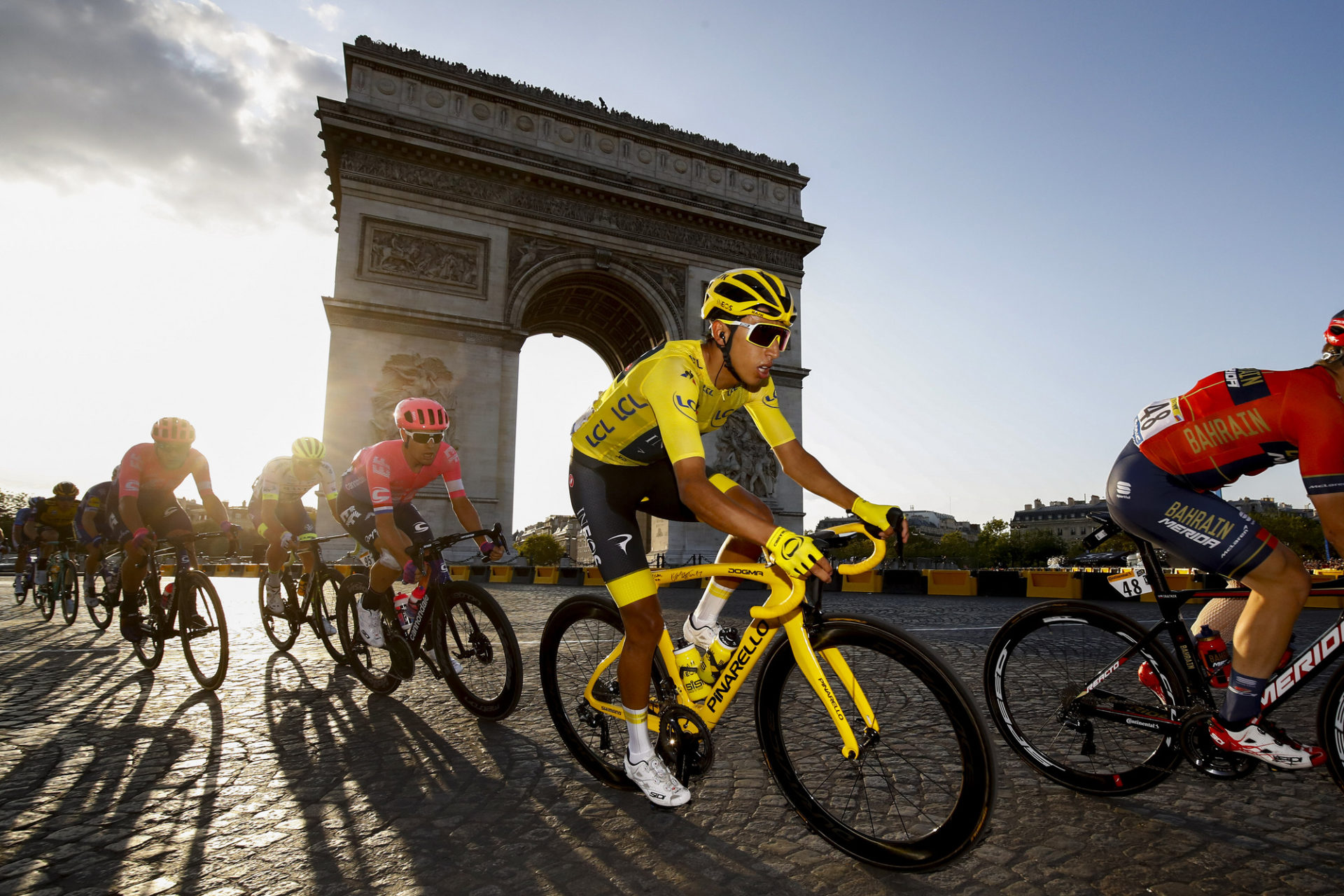