It’s been a humbling couple of weeks for one Eldrick Tont Woods.

The 14-time major champion recently ended his 2014 regular season on one of the lowest notes of his career – missing the cut with a 6-over at the PGA Championship, only the fourth time in his career he had not reached weekend play at a major tournament. Shortly thereafter, Woods saw the writing on the wall – and it said to stop playing.

Less than a week after he decided to withdraw from consideration for a Captain’s pick on the United States Ryder Cup team, the 38-year-old declared that he would be taking a prolonged break from the golf course. El Tigre reiterated from earlier statements that he would not play competitively until early December, where he will play in his own World Challenge event. He even insisted that it would be awhile until he even touches a golf club again:

“It’s a slow, tedious process. I’m not going to swing a club for at least another month. It’s just about getting stronger, getting more stable, getting more dynamic, getting more explosive. Just getting my body more athletic again. It’s a process. You can’t just hop in and do it all at once. You’ve got to take it step by step.”

It’s tough to see one of the world’s best players struggle like he did this past golfing season, especially with the chronic back injuries plaguing his current play. After all, his 2014 season consisted of a four-month absence due to back surgery, and disappointing finishes in his two major appearances. It appeared that, if he wasn’t recovering from injuries, he was either playing himself out of tournaments, or he was re-injuring himself.

So, it seems like, with the Florida native’s continued struggles on the golf course, buzz on the internet has already started. And, if 2015 brings more of the same for Woods, it will only get louder.

Is it time for the great Tiger Woods to hang up his clubs and retire?

After all, the man turns 39 in December, and it seems more and more like the body will no longer cooperate with the mind and spirit of this generation’s greatest golfer. Throw in the fact that golfers a little more than half his age – namely, current No. 1 golfer in the world Rory McIlroy – are beginning to dominate the game in their own right, and the chances that even a healthy Tiger Woods could win another major dwindle exponentially by the month.

Others could even point to recent events as reasons why Woods should consider retiring. After all, Tiger’s “killer instinct” on the course has always been one of the greatest aspects to his game. One could make the argument that withdrawing from the Ryder Cup, and taking a long break from swinging the ol’ clubs, are signs that edge is starting to disappear.

Furthermore, his recent appearances with McIlroy on the television circuit have been described as “awkward” at best, because of two things:

1) McIlroy was essentially talking about Woods’ greatness on the golf course in the past tense, with Tiger standing right next to him; and

2) Woods kind of just stood there and took it.

The Woods of old – the Woods we knew that dominated the field simply by his mere presence – would never have taken that lying down. Perhaps the chronic back issues, the sporadic struggles over the course of six years, and the sheer pressure of attempting to break through for that 15th major have finally got to him. Maybe these actions speak to a bigger self-realization for Woods – that he no longer has what it takes to be competitive where, in his mind, it matters most.

Then again, he could simply be taking all of this as just another minor stall to a career due to get back on track.

Sure, this isn’t a Tiger we are accustomed to seeing – but that’s only because we haven’t seen it before. This could easily be the next evolution of Tiger Woods – one that doesn’t need an intimidation factor to best his compatriots on the course, and one he is only beginning to grow into. Domination can no longer be the goal for Eldrick – he may simply have to play the course as smart as possible, and hope for the best.

Also, we can’t dismiss the fact that, despite having not won a major since 2008, he had one of his best seasons since just last year, in 2013. A healthy Tiger had two top-10 finishes in majors (T-4th at the Masters; T-6th at the Open Championship), and finished the season as the proud owner of the PGA Player of the Year Award, the PGA Tour Player of the Year Award, and the Vardon Trophy, awarded to the player leading the PGA Tour in low scoring average. He also finished tops on the PGA money list, with over $8.5 million. It stands to reason he could see similar success – and possibly a major win or two – in 2015.

He just needs to stay healthy. That seems to be the key – after all, things always go off the rails for Tiger and his game when he tweaks something in his back. While he will likely have to make further tweaks to his game in order to alleviate whatever bothersome torque he would inflict on his muscles, it’s doable for a man who had reinvented his swing numerous times in the past.

And, let’s be honest – while McIlroy and his 20-something brethren seem to be dominating the tour right now, that in no way signifies whatever long-term success they could have moving forward. After all, even when McIlroy burst onto the scene with major wins in 2011, he has been hot-and-cold (to say the least) ever since. While he can show dominance on some days, he can just as easily look pedestrian on others. If a healthy Tiger could catch him on a bad day, it could be just enough to win a major (or four) down the road.

Ultimately, I don’t believe Tiger should retire just yet. I think there’s still some of the old 2000s magic left in his tank – and until he can easily be bested at the peak of his performance, you can never count him out of anything. 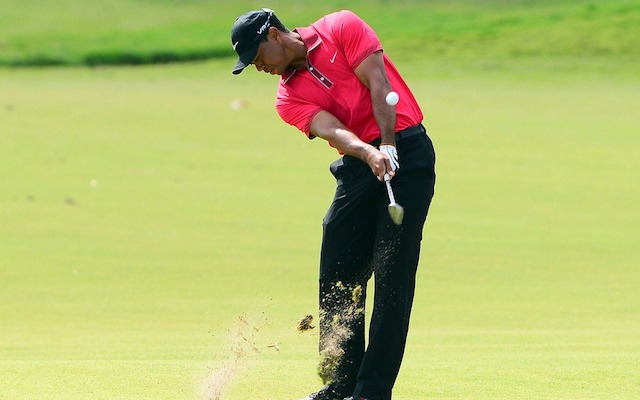