It was felt that the change in colour of kit and ball may work as a positive with regards to the performance of the Pakistani batsmen.

After winning the toss Pakistan elected to bat first with the inclusion of Mohammed Hafeez who missed the ODI series due to injury it was felt that it would strengthen the top order and also add experience to the spin attack which is a major factor due to the absence of Saeed Ajmal.

Mitchell Johnson started well with the new ball and to the delight of his captain he struck early by dismissing Hafeez without a run to his name. Peter Siddle who was assisting Johnson with the new ball from the other end also struck by knocking over Ahmed Shehzad.

This meant that Azhar Ali and Younis Khan would both have to bat well against the new ball if it meant that Pakistan were to get to a challenging first innings total. After the first session it was obvious that Pakistan would have their work cut out against the Australian pace bowling attack.

Azhar Ali the inexperienced of the two batsmen at the crease had battled hard to reach to his half century this was his 15th test fifty he also has 5 test centuries however, on this occasion failed to convert this start into a more substantial score.

He fell to a well disguised slower delivery by Johnson for 53 off 167 balls. However, the partnership between Ali and Khan had given the Pakistan innings much-needed stability.

Younis Khan continued his resilience at the crease and proved yet again why he should still hold his place in the Pakistan test team. He played some scintillating strokes and notched up yet another perfect century scoring 106 off 203 deliveries. He is now top of the list alongside the great Inzamam-Ul-Haq with the most international centuries for Pakistan. He also now has the record for scoring a century against every test playing nation. Pakistan reach stumps on day one with the score on 219/4. Captain Misbah is playing a steady innings in an attempt to find form he will feel that he needs to score well in this innings to ensure that speculation over his captaincy will be overshadowed by his batting performance.

The test is still hanging in the balance with no team clearly taking the initiative. Pakistan must be happy with the performance of Younis Khan and Azhar Ali they will want the lower order to contribute also to ensure that a total in excess of 300 is achieved. Australia will be aware of the vulnerable nature of the Pakistan batting order and will feel that early wickets in the morning session of day 2 can swing the tide in their favour. 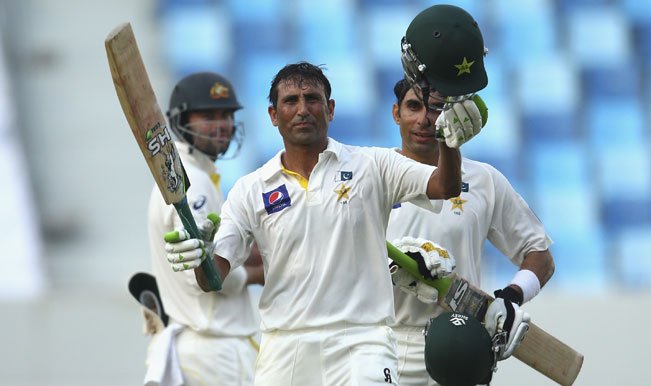