A resounding victory for Kyle Shanahan and the San Francisco, as they triumph over the Miami Dolphins, but at what cost? The 49ers lost their starting quarterback, Jimmy Garoppolo, for the season with a broken foot, crushing their Superbowl aspirations.

This game was built as a turning point in the seasons of both teams, both with the Superbowl in their sights, and the perfect opportunity to prove they are a legitimate force in the league.

Miami came into the game with an 8-3 record, with the most dangerous offense in the league, fronted by speedster Tyreek Hill and ex-Alabama QB, Tua Tagovailoa. On the flip side, the 49ers claimed the #1 defense in football, allowing the fewest points per game in the league, and not allowing a single second-half point since the Chiefs in October. Demeco Ryan’s defense was also fresh off a shutout against the Saints the week prior. This battle would be decisive in the outcome of the game, especially as the game would unfold.

The best defense in the league was caught sleeping at the start of the game, as on the first offensive snap of the game, Trent Sherfield broke free for a 75-yard touchdown, against his former team. A nightmare opening for the 49ers, who were typically so good at preventing big, chunk plays. Sherfield found the gap in the 49ers zone and caught safety Tashaun Gipson Sr. flat-footed as he cut cross-field for the house call.

ALSO READ:  NFL Week 12 Review -The Jags, Cowboys and Browns have something to be thankful for
Embed from Getty Images

The 49ers answered back with a field goal, marching downfield with significant gains by WR Brandon Aiyuk, followed by Christian McCaffery before the drive was halted by a sack where Jaelen Phillips and Jerome Baker combined to bring down Garoppolo. It was on this sack that Jimmy Garoppolo suffered a foot injury that would end his season, he collapsed awkwardly as he was hauled down, leading to multiple broken bones in his foot and ankle. The second 49ers starting quarterback to be ruled out for the season, after Jimmy G stepped up following an ankle fracture for Trey Lance in Week 2. Unfathomable bad luck for a team firmly in their Superbowl window.

In stepped Brock Purdy, this year’s Mr Irrelevant. Purdy was the 262nd and final pick in the 2022 NFL Draft. Down by four against one of the better teams in the NFL, it looked like an uphill battle for Purdy, but a gutsy performance and a stout defense meant the 49ers were far from out of this one.

Despite never starting an NFL game, Purdy stepped into one of the most complex offenses in football and operated it at a good level. It wasn’t always fluid but on his maiden drive, the 49ers marched down the field for six, culminating in a Kyle Juszczyk touchdown. If there was any team built to withstand a pair of gutting injuries at quarterback, it is the 49ers, with an embarrassment of riches surrounding Purdy on offense, and a fantastic defense that can keep the games close, the 49ers were able to take the lead, 10-7.

Purdy did have one interception, but kept the 49ers afloat the entire game, completing 25 passes for 210 yards and two touchdowns. He got the ball in the hands of his playmakers, Deebo Samuel and Christian McCaffery, and let them do the rest, which is all Garoppolo really had to do when he played.

The real difference makers in this game, however, were Nick Bosa and the 49ers defense. Tagovailoa finished the game with 295 yards but was shut down by the defense, which only allowed 17 points all game, forcing three picks. Bosa sacked Tagovailoa three times, making him the NFL sack leader, despite missing time through injury. Bosa appears to take his play up a level every single season he’s had and was absolutely unstoppable. With a defense like this, the 49ers can win with essentially anyone at quarterback.

Looking at the bigger picture, with the trade deadline shut, and the 49ers now on their third QB, the Superbowl is highly unlikely, but this unit is resilient and has shown that they can win, no matter who is throwing the ball. With the demise of Tom Brady, and Aaron Rodgers, the Rams collapse and Drew Brees retirement, the NFC is uncharacteristically weak. The Cowboys, Vikings and Eagles have shown quality but this 49ers team is built for playoff football and has the potential to get past either of those teams if Purdy, or whoever is playing at that point, can compete at an acceptable level. With so much talent at every position, they can put points on the ball while the defense stifles the opposition.

ALSO READ:  NFL Week 12 Review -The Jags, Cowboys and Browns have something to be thankful for
Embed from Getty Images

With that being said, faced with the challenge of stopping Patrick Mahomes or Josh Allen, it is a very tall order, without a real QB1. Once again, the quarterback will likely be what holds the 49ers back, despite them actually making an effort to improve this spot.

Not that I believe (based on what the 49ers have stated and reporting of his injury) that Trey Lance will return this season. But it is medically plausible he could; especially with the unknown around Jimmy G right now.

The next few days will be critical for the 49ers as they must decide the plan of action at quarterback, do they go all in with Brock Purdy, look to free agency, pick up the likes of Cam Newton, or try to pry Ryan Fitzpatrick or even Drew Brees out of retirement? Alternatively, they play the ultimate back-track, and try and bring Trey Lance from injury. The nature of Lance’s injury does keep the door open for a return this season. Bob Griese came back from the exact same injury in 77 days. It is medically possible for Lance to recover fully before the playoffs.

Only time will tell, but it doesn’t get any easier for Purdy going forward, as he is expected to make his first start against Tom Brady and the Buccaneers next Sunday. A baptism of fire for Purdy, but these are the sort of teams he is going to have to compete against if the 49ers plan on making anything of this season. 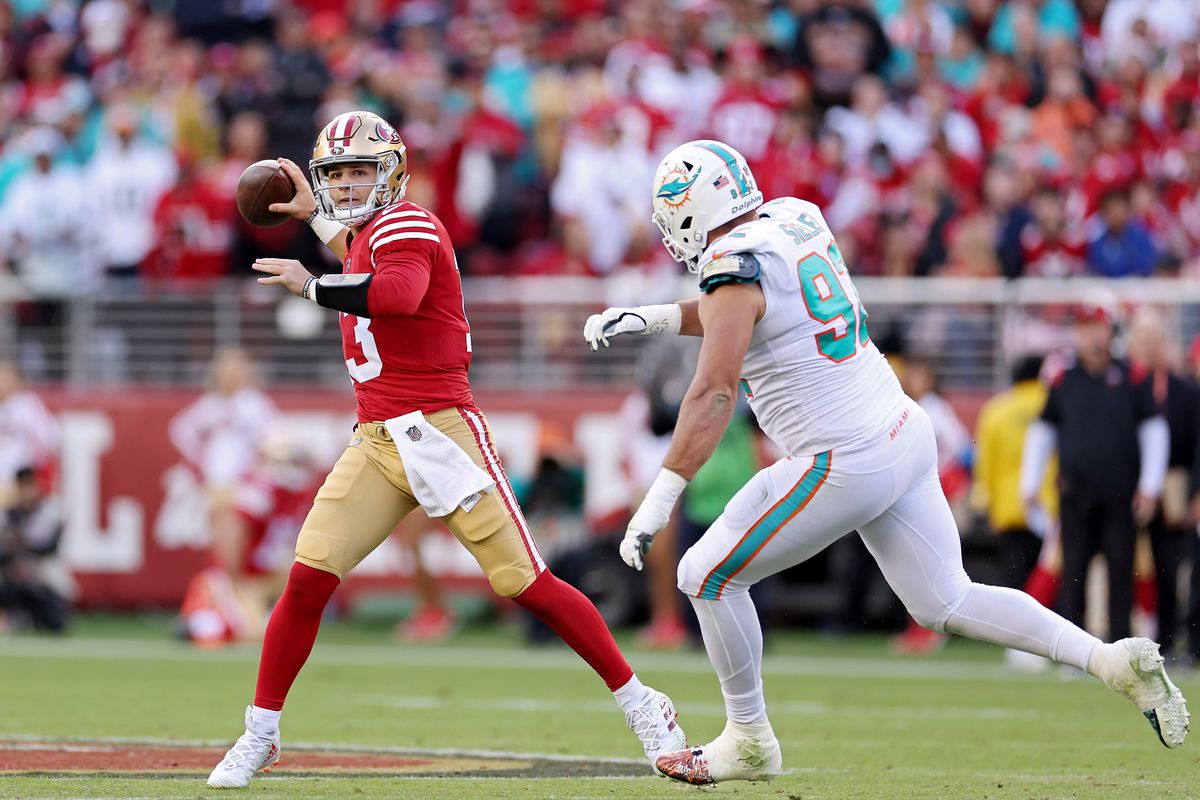