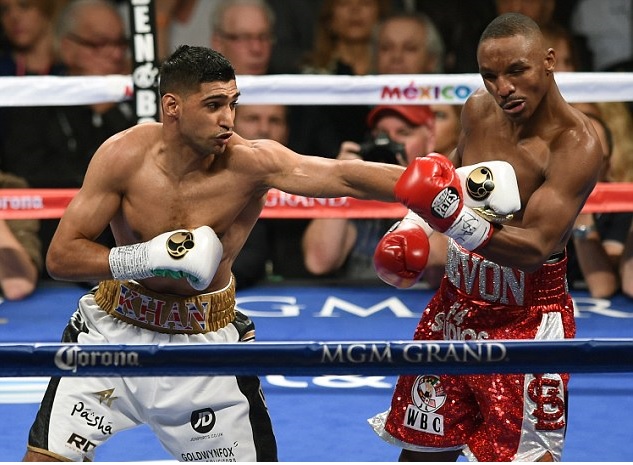 Amir Khan now has his sights set on a lucrative fight with Floyd Mayweather after beating Devon Alexander in a unanimous decision on points in Las Vegas last night. Khan thinks he now deserves his chance against the world’s best pound for pound fighter and believes he has the skills and movement to become the first fighter to beat him.

It was a magnificent night for Amir Khan with a dominate display by the British boxer, but will it be enough to earn him a shot at Floyd Mayweather?

Khan’s superior speed was evident from the first round, landing a flurry of fast shots on the American; he was razor sharp with offence landing on numerous occasions – and this continued for the first three rounds.

Into the fourth round Khan continued to dominate Alexander, catching him with a straight right flush on the chin which snapped back the American’s head.

Alexander though, a former two-weight world champion, hit back in the fifth. He caught Khan off guard due to his all out attack approach, but Khan was able to bob-and-weave out of the Alexander’s attack.

He was heard saying to Khan in the corner: “Quit running in there and running wild.”

“You’re beating him up; he won’t be able to take this for a few more rounds,” he yelled at Khan.

Khan went on to dominate the sixth and seventh round and despite a revival from Alexander in the eighth, Khan remained in control of the fight.

It was a dazzling performance from the British boxer at the MGM Grand in Las Vegas. Khan’s confidence was abundant in the closing stages as he raised his hands to taunt his opponent late in the twelfth round.

He put on a boxing masterclass, an exhibition of speed and skill, putting on a near-shutout performance to claim victory with a unanimous points decision.

“Look, last year it didn’t happen and I really believe that I’ve earned my shot at the best fighter in the world which is Floyd Mayweather,”

“Khan versus Mayweather will be huge. The UK fans will come to watch and come to support and we’re going to take the belt off him.

“I really believe that Floyd will have big problems with my speed, movement and accuracy. Floyd is one of the best fighters in the world, don’t get me wrong, but I want my chance.”

Alexander was gracious in defeat, admitting how he struggled to cope with Khan’s speed and clever movements:

“I don’t want to make no excuses, he was the better man tonight,” he said. “I wasn’t good enough like I planned.

“He was running a lot, but that was no excuse, I could have caught him. I worked hard in the gym.

“I was moving good, I was catching the jab good, but I wasn’t good enough.”

has just registered!
40 minutes ago