George Foreman was born in Marshall, Texas on January 22 in 1948 to a railroad construction worker and his wife, George Foreman (76-5, 68 KO’s) was the fifth of seven children and grew up in the Fifth Ward, Houston, Texas. Foreman had six siblings and spent most of his early youth in trouble.

Although his biological father was Leroy Moorehead, he was raised by J.D. Foreman who had been married to his mother when George was a small child. During his youth, he was often in trouble with the law and would carry a great deal of anger around with him which soon became evident from his street brawling and gang fights.

George Foreman was a person feared for his size and his aggression; he was well-known on the streets of Houston, earning him the respect of several local gangs. “You name it, I’d done it,” he would say in later life, referring to his misspent youth. He credits the Job Corps, which he joined in 1965, with his complete turnabout in attitude and direction.

By his own admission in his autobiography, George was a troubled youth. He dropped out of school at the age of fifteen. Foreman was interested in football and idolized Jim Brown growing up as a kid, but he gave it up to follow a career in boxing. In 1967, he terminated his training in the Job Corps after winning the National A.A.U heavyweight title in Toledo, Ohio. This assured him a spot on the ten-man Olympic team to compete in Mexico. He won a gold medal in the heavyweight division at the 1968 Mexico City Olympic Games.

After his gold medal success, Foreman started to take boxing seriously, developed an intense training regime and turned professional in 1969. He faced Don Walheim in New York in his first pro boxing match and won in a three-round knockout. By the end of the year, he had notched up a total of 13 fights and had won them all.

The following year, he continued his victory streak by knocking out 11 men, while his career rose rapidly up the rankings. Despite his succession of wins over the next couple of years, some of the boxing world thought that Foreman was only winning because he was going up against over-the-hill fighters.

These critics ate their words when he was faced with the much-feared Joe Frazier in 1973.

Joe Frazier was sent to the mat twice in the first round by George Foreman – even lifting him off his feet with a couple of his punches and by the second round, Frazier was beaten. The world had a new heavyweight champion.

While Foreman was deciding who he should take on as a first challenger, former champions Ali and Frazier worked towards what they had hoped would be comebacks.

Foreman’s first title defence was in Tokyo on September 1, 1973, against Puerto Rican heavyweight champion “King” Jose Roman. The fight was over in two minutes of the first round. The powerful champion, at 219½ pounds, smashed the inept Roman to the canvas three times with devastating right-hand blows.

Foreman’s second title defence on March 26, 1974 in Caracas, Venezuela ended in two minutes of the second round when he jolted Ken Norton to the canvas. His 212½-pound challenger barely beat the count but his trainer, Bill Slayton, jumped into the ring and referee Johnny Rondeaw halted the fight which drew 9,000 fans into the Poleidro arena.

He accomplished this with a knockout over George Foreman in 2:58 of the eighth round when a left hook, a right to the jaw, and another left hook deposited the champion to the canvas, where he was counted out by referee Zack Clayton.

The only other heavyweight to achieve this feat at the time was Floyd Patterson, who re-won his championship in 1960 by knocking out Ingemar Johansson, who had taken the prize from him the previous year.

Approximately 62,000 fans witnessed Ali’s upset victory over Foreman in the Rumble in the Jungle fight which took place at the 20th May Stadium in Kinshasa, Zaire.

Going into the fight, Foreman was 3/1 favourite, fought according to plan, the only way he knows to fight, a crowding pushing, and two-fisted flailing attack. From the opening bell up to the ending in the eighth round George had Ali against the ropes while he banged away at Ali’s rib cage in an attempt to blast his challenger out of contention.

George Foreman looked formidable in the early rounds as he appeared to be overpowering Muhammad Ali with jolting body blows. George’s attempt to land to Ali’s head was less successful as Ali used the ropes to advantage, sliding and moving just enough to avoid being seriously damaged.

In the third round, Ali began to use his left and several combinations to Foreman’s head, spearing the oncoming champion. By the fifth round it became obvious to those at ringside that Ali was fighting a different type of fight than had been expected, He did not dance around the ring and exhibit the butterfly approach of speed and stinging, rather he fought Foreman from a flatfooted stance and used his speed to counterpunch and cover up, avoiding the all-out blitz so characteristic of the champion’s mode of attack.

Ali won by knockout, putting Foreman down just before the end of the eighth round. It has been called “arguably the greatest sporting event of the 20th century”.

Despite Foreman’s statement to the writer in his dressing room after the fight was over that he was never tired during the fight and had never felt as secure as he did during the bout, it was obvious to all at ringside that Foreman was kayoed as much from exhaustion as from Ali’s blows.

Foreman’s punching power lessened from the fifth round on and the tide of the battle move from Foreman’s high tide, proceeding to ebb as his strength failed and Ali began to land the better punches.

The surprise was that it was Foreman who lost his power and stamina while Ali, who many felt would be worn down by the pressing tactics of the champion, was the fresher as the last three rounds of the contest were fought.

After the fight in both dressing rooms the new and old champion played the parts expected of them:

Ali: “I told you all I would do it, but did you listen? He was scared, he was humiliated. I told you I was the greatest heavyweight of all time.

“I didn’t dance. I wanted him to tire, to lose power. I decided to use the ropes. He punched like a sissy.

“What you saw wasn’t me, it was Allah. It wasn’t me, you know I can’t punch. Me knock out George? Not me, that was Allah,”

Foreman played the opposite role. Asked if the count had been a fast one, he said emphatically, “No!”

“Ali was the better man tonight, give him the credit due.”

A large bruise swelled his left cheek and his left eye was slightly closed as he lay on his back on the rubbing table in his dressing room.

“I lost the fight, but I wasn’t beaten. I want a return fight. I followed the instructions of Dick Saddler, my trainer, but next time I will follow them better: I can beat Ali.”

Days later, as the drums began to beat for a rematch, George was quoted as beefing about the count, about the ropes, about many things, but these are all the manifestations that go into the build up for a return fight.

Each fighter received five million dollars as a guarantee, and a return could generate twice as much. Regardless of what the future held for both fighters, the fight in Kinshasa would go down as one of the most exciting, action-packed heavyweight title fights of all time.

Foreman would later reflect that “it just wasn’t my night”.

He was unable to secure a rematch with Ali. It has been suggested that Ali was ducking Foreman – although he did give a rematch to Joe Frazier and to Ken Norton.

After taking a year out, George Foreman made his first of many comebacks in 1976, stating his intention of securing a rematch with Ali.

His first opponent was Ron Lyle, who had been defeated by Muhammad Ali in 1975. Towards the end of the fight, Lyle tired and was unable to defend himself when Foreman delivered a dozen unanswered blows until Lyle collapsed.

Lyle was counted out giving Foreman the win, the fight was named by The Ring as “The Fight of the Year.”

Frazier put on much better display in the second fight; he used quick head movements to make Foreman miss with his hardest punches.

However Frazier was not getting any younger. He was wearing a contact lens for his vision which was knocked loose during the bout.

Foreman eventually put Frazier down in the fifth round and the fight was stopped.

Next, Foreman knocked out Scott LeDoux in three and John Dino Denis in four to finish the year.

After being away for the ring for 10 years, Foreman surprised the boxing world by announcing a comeback at the age of 38.

Foreman continued to rack up a string of victories; this would lead to Foreman fighting for the Undisputed Heavyweight title against Evander Holyfield.

Very few boxing experts gave the 42-year-old Foreman a chance of winning; Holyfield was too slick and agile for Foreman.

In 1993, Foreman received another title shot for the WBO Championship. He faced a young and fresh challenger in Tommy Morrison. Foreman and the crowd were frustrated with the lack of desire Morrison showed to trade blows and the crowd booed throughout the fight.

Foreman was competitive throughout the match, but after 12 rounds, Morrison won by a unanimous decision.

Foreman once again fought for a world title, this time facing Michael Moorer who had beaten Holyfield for the IBF and WBA titles.

Foreman’s fight against Moorer took place on November 5 in Las Vegas, Nevada, with Foreman wearing the same red trunks he had worn in his title loss to Ali 20 years earlier.

Foreman was behind on the score cards as the tenth round began. It seemed like age had finally caught up with the fighter as he was slow coming forward unable to “pull the trigger” on his punches.

However, a short right-hand landed flush on Moorer’s chin. Splitting his lip in the process, he was put down on the canvas as the referee counted him out

Foreman broke three records: he became, at age 45, the oldest fighter ever to win the World Heavyweight Championship;

Foreman had always been keen to fight against a young Mike Tyson, but the WBA installed Tony Tucker as their No. 1 challenger.

Foreman was unwilling to face the aging Tucker and allowed the boxing organisation to strip him of his title.

The IBF ordered an immediate rematch which Foreman refused and he would consequently be stripped of that belt.

George Foreman then went on to face Shannon Briggs in an “eliminator bout” for the right to face WBC champion Lennox Lewis.

Although Foreman was the clear winner, rocking Briggs on many occasions, once again there was a controversial decision. However, this time the decision did not go in Foreman’s favor and this would be the last time we saw him in the ring.

In retirement Foreman always said that his success was due to his healthy eating. We have since seen Foreman appear as a spokesperson for Russell Hobbs Inc promoting fat-reducing grill. Yet he will be remembered by history as one of the greatest heavyweight fighters to have ever entered the boxing ring.

Beyond The Glory George Foreman Documentary: 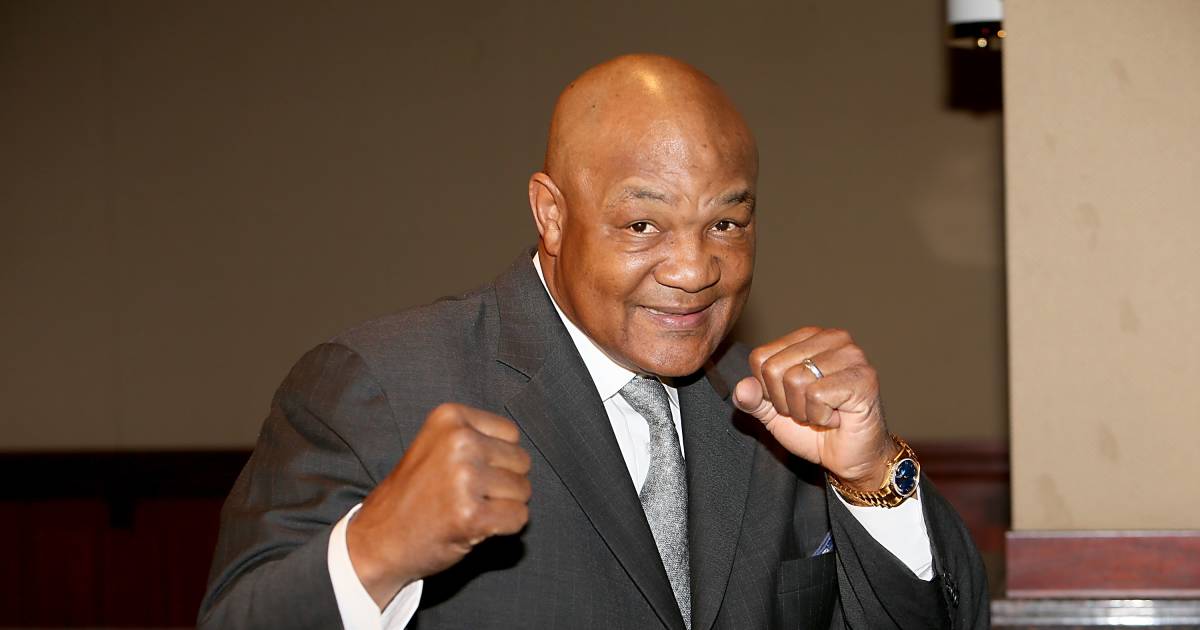