Skip to content
You are here
Home > US Sports > NHL > An Ode to the St. Louis Blues 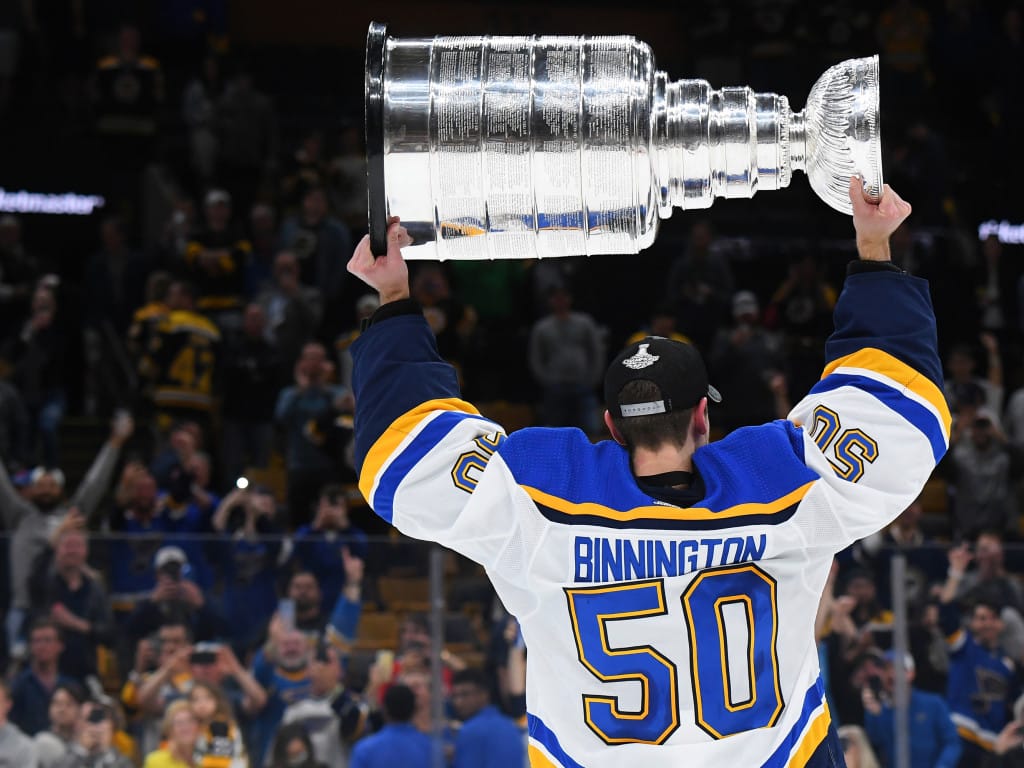 Flashback to January and tell me who the hell would have seen this coming from the St. Louis Blues? Dead last in the NHL standings in January. Now, they are Stanley Cup Champions. How did they get here?
An Unexpected Lift in Goal
January 7th vs the Philadelphia Flyers is where the story of Jordan Binnington really began. His first career NHL victory came that very night and it was also his first career NHL shutout. Up until this point in the season, the Blues had shaky goaltending from their starter Jake Allen. It was from here on out that Binnington became Winnington and led the Blues on a historical 2nd half run. They had their eyes on the division title and fell just short of that but there would be playoff hockey in St. Louis which was something that nobody expected back on January 7th. Binnington was great in the playoffs. Sure there was the occasional off game but when the Blues needed a stellar performance in goal, Jordan Binnington was there. Nothing says that more than the first period of Game 7 of the Stanley Cup Final. Binnington was basically standing on his head in the first period. The opposite of opposing goalie Tuukka Rask. Rask had allowed 2 goals on 4 shots in the first period. St. Louis won Game 7 on the shoulders of their rookie goaltender.
The Emergence of a Hometown Hero
Patrick Maroon took less money to go back to his hometown of St. Louis. He turned down less money and more term just for the opportunity to keep his family together. The decision looked brilliant when he scored the game winning double overtime goal in Game 7 of the Semi-Finals vs Dallas. The Big Rig, as he is known amongst the organization, provided a physical spark on a nightly basis. Every goal he chipped in was just a plus for the Blues. He became a leader for a team that had no direction from October to January. His gamble of going back to St. Louis on a one year deal paid off and now he is a Stanley Cup Champion.
The Offseason Acquisition
Ryan O’Reilly was traded to the St. Louis Blues from the Buffalo Sabres for Tage Thompson, Vladimir Sobotka, Patrik Berglund, a 2019 first round pick, and a 2021 2nd round pick. There was belief in Buffalo that Ryan O’Reilly wasn’t a team-first type of player. Because of this, Buffalo decided to move him. The Blues jumped all over the opportunity and rightfully so. O’Reilly’s stat line for the 2018-19 season was 28-49-77. 49 assists and 77 points were career highs for the center in his first year with St. Louis. He is also a finalist for the Frank J. Selke trophy. On top of all that, he was the best player for St. Louis for a lot of the Stanley Cup Playoffs. O’Reilly had 23 points in 26 playoff games with 9 of those points coming in the Stanley Cup Final. This performance on the biggest stage earned him the Conn Smythe Trophy. He was a huge missing piece for this team and made sure he’d leave his mark on the playoffs. Look at the Sabres this season. How did they let a player like Ryan O’Reilly go? At the moment, this looks like it can potentially be the best trade in St. Louis Blues history. Fans and management will gladly thank the Sabres for their Conn Smythe winner.
READ:  Learning New Things During Your Summer Break Is the Best Souvenir