In a move that really won’t shock anyone, Carmelo Anthony has verbally agreed to join the Houston Rockets for the 2018/19 NBA season.

The 34-year-old was traded to Atlanta for Dennis Schröder before being waived by the Hawks, making him an unrestricted free agent.

While Anthony will still be paid near $28million from the Oklahoma City Thunder, he will likely sign a veteran minimum contract with the Rockets after Daryl Morey resigned Clint Capela in late July.

The move will see the 6’8″ wing slide into the starting lineup to replace Trevor Ariza, and this is where the problems start for Houston.

While Ariza was never a substantial scoring threat, his ability to knock down the three-point shot was integral to their offence. He shot 37 per cent from deep last season, attempting nearly seven per game.

Additionally, Ariza was a fantastic catch-and-shoot wing who greatly benefitted from the Harden/Capela pick and roll pairing.

As the defence collapsed, Ariza was left wide open, allowing him to knock down 40 per cent of his catch-and-shoot points. If the defender stayed with Ariza, it would give Harden and Capela free reign to attack the basket how they please.

And this is all on one side of the ball, despite falling off towards the end of the season, Ariza is absolutely an above-average to great defender and was a crucial piece for the Rockets defensively.

Ariza was third on the team in steals and regularly trusted to defend the opposing team’s best player – be it LeBron, Durant, or even Anthony Davis.

This move from the Rockets is indicative that they’re willing to forfeit the NBA’s sixth-best defence in order to try and outgun the Golden State Warriors, albeit with a player who just posted a career low in points and refuses to come off the bench.

Coming off the bench would be beneficial for both parties as the Rockets’ second unit desperately need a scoring punch while giving Anthony the usage rate he craves.

The small forward didn’t exactly have a fantastic run with the Thunder as he played third wheel to Russell Westbrook and Paul George, as he posted career lows in minutes, field goals, free throw attempts and overall field goal percentage.

Not quite the memorable season Carmelo was after, but in an interview with Jemele Hill of The Undefeated, Melo explained his psyche after a disappointing season.

“I was more hurt because a lot of people just take the last six months. That’s what you start to become. That becomes your story. For me, out of all the work I put in the NBA — wins, losses, points scored, whatever — to be judged off of six months of a year overshadowed 15 years of what you’ve accomplished. That’s the hurtful part.”

But Anthony starting games alongside Harden and Chris Paul could cause some significant spacing issues.

While Carmelo has been inefficient from behind the arc, it hasn’t been from a lack of trying. This season he attempted 6.1 threes per game, the second highest number of his career.

The 10-time NBA All-Star could fit into the Rockets system well, but he’ll need to be punishing teams from the very start of the season.

As soon as any team notices that he’s in a slump, expect more double-teams to trouble CP3 and Harden when they’re on the ball.

Another aspect to consider is how much of the ball Carmelo is going to demand and how much CP3 is willing to let him have.

Do you pass it to an aging 34-year-old who just had the worst season of his career? Or the reigning MVP of the league?

Check out all the latest NBA news here and let me know your thoughts on Melo’s move on Twitter. 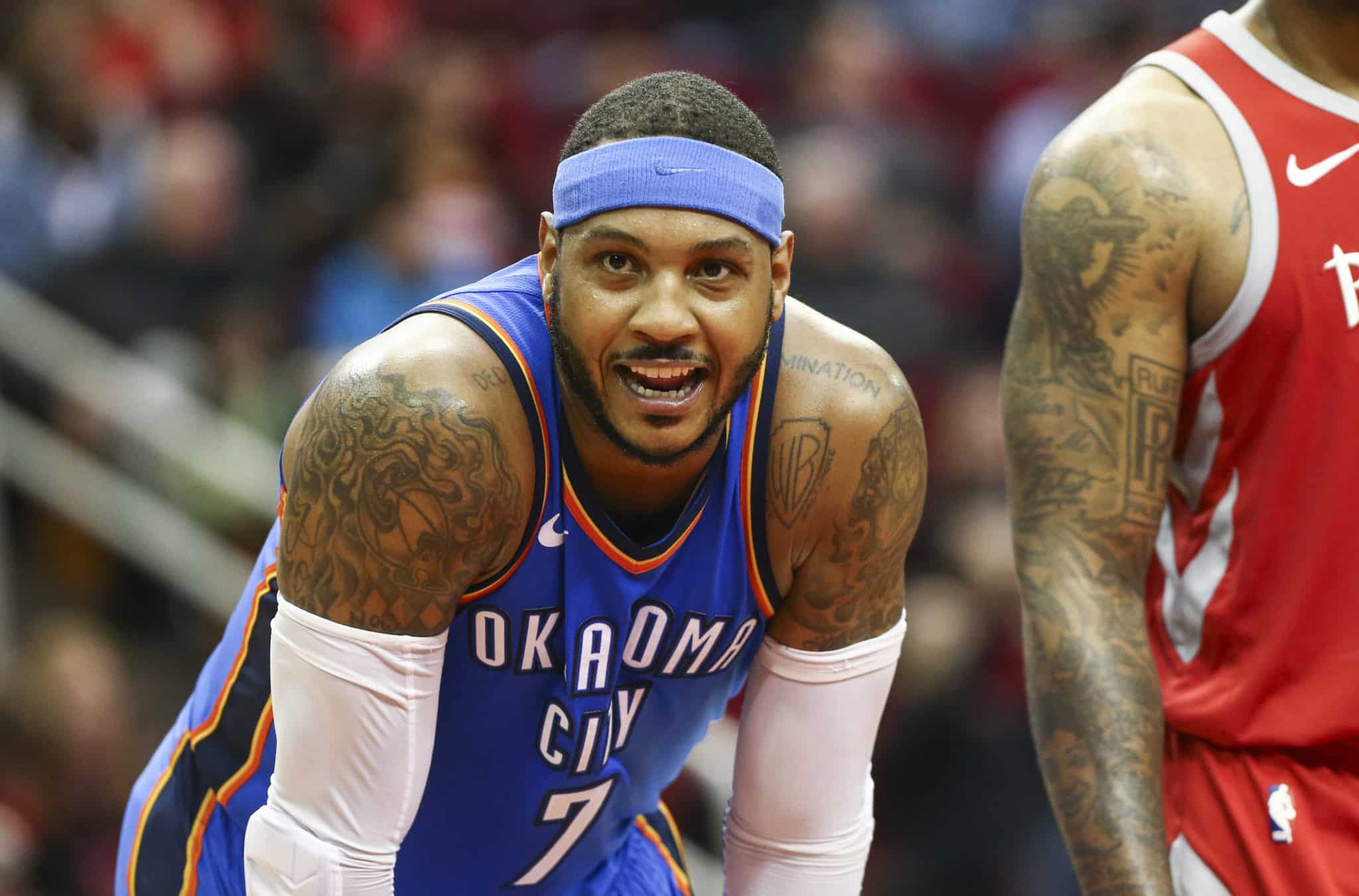