With yet another exciting NFL season coming to an end, it is time to start talking draft. The NFL draft hasn’t exactly been nice to the Cleveland Browns in recent years. Players like Trent Richardson, Brandon Weeden, Barkevious Mingo, Justin Gilbert, and even Johnny Manziel haven’t been able to live up to the first round hype.

Coming off a pleasant 7-9 season, the Browns still have areas they can build on. There is no better time to fix these needs than the draft. These are a couple of positions that the Browns can draft to help them get into the playoffs for the first time since 2002.

The Receiving core for the Cleveland Browns consist of players you have probably never heard of. Andrew Hawkins was the team leader in receiving yards and receptions. Travis Benjamin lead the team with three touchdowns. Josh Gordon only played three games due to a violation of the leagues drug policy.

Long story short, the Cleveland Browns desperately need a wide receiver. In last years draft, they passed up on players like Sammy Watkins and Odell Beckham Jr. So this year receiver should be the number one priority.

You could make an argument that DeVante Parker is the second best receiver in the draft, behind Amari Cooper from Alabama. Parker missed the first seven weeks of the 2014 season due to foot surgery. Despite missing significant time, Parker still managed to rack up 855 yards on 43 receptions. He also hauled in 5 touchdowns on the season.

The Cleveland Browns have the 12th pick in this years NFL draft, and if Parker is still available there is no reason the Browns shouldn’t select the receiver out of Louisville.

Starting defensive tackle, Ahtyba Rubin, missed time this season due to multiple injuries. Even when healthy, Rubin only managed to get 28 tackles, and 1 sack on the season. His replacement, Ishmaa’ily Kitchen, didn’t do too well either. Kitchen did manage to rack up 43 tackles, but didn’t get to the quarterback once.

Over his career with the Washington Huskies, Danny Shelton had 203 tackles, along with 11.5 sacks. His 2014 season was easily Shelton’s best season in college, totaling 88 tackles, and 9 of his 11.4 career sacks came in his senior year.

Danny Shelton would be a great improvement at the defensive tackle position. Although, managing to get both Parker and Shelton may be a hard task to accomplish. With both the 12th pick, and 19th pick in the upcoming NFL draft, the Browns may have to make some draft day trades in order to land both of these prospects.

With Joe Thomas, Alex Mack, and Joel Botonio already on the offensive line, adding one more piece may be what the soon to be second year running backs need to take their games to the next level.

Adding Collins to an offensive line with pro-bowlers such as Joe Thomas and Alex Mack would significantly help the Brown’s offensive line.  Former second round pick, Mitchell Schwartz isn’t living up to expectations, so La’el Collins would most likely find his way into a starters position.

With Cleveland’s offensive line allowing 31 sacks on the season, an offensive linemen would help give what ever quarterback that is back their time in the pocket. It could also help Terrance West and Isaiah Crowell find open holes. Overall, an O-Lineman would do wonders for the Cleveland Browns.

There are certainly other positions the Browns could make an upgrade on in the draft. For example, the quarterback situation wasn’t exactly pretty in Cleveland, so the Browns may use a later draft pick to get a quarterback. The Browns could also use a defensive end, which they may select in the second or third round.

Hopefully the draft day curse in Cleveland will come to an end after this season. With an improving team, there is nowhere to go for the Browns but up. Cleveland almost has enough talent to be a playoff-caliber team, and the draft is a perfect place to find the missing links. 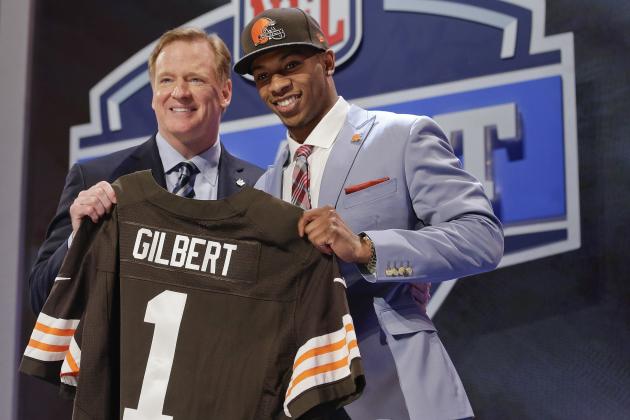