When Stuart Lancaster names his England training squad for the Rugby World Cup on Wednesday, he will be congratulated and criticized.

Either reaction will hinge on the selection, or not, of No. 8 Steffon Armitage and fullback Nick Abendanon. They have been impressive in the European Champions Cup and Top 14. Armitage was last season’s European club player of the year, and shortlisted again this year for the award given to Abendanon.

But they play for clubs in France, and that’s the problem, or not.

England has had a policy of not picking players based overseas since November 2011, in the wake of the humiliating Rugby World Cup campaign in New Zealand. The English RFU signalled the move a year beforehand as a pre-emptive strike, when signs were strong that cash-happy French clubs were lining up to grab English stars off contract.

The policy was largely successful in keeping English stars in England, and the Premiership has enjoyed peace and prosperity.

The policy came with a proviso, that only in “exceptional circumstances” could an England coach pick an overseas player, and it has yet to be enacted.

Wednesday could mark the first time, when Armitage or Abendanon or both could be picked. Or neither, if the overwhelming majority of English observers is taken into account.

Martin Johnson, Lancaster’s predecessor who took four overseas players to the 2011 Rugby World Cup, was against picking the pair.

“If you’re good enough, you want to have the best opportunity to play for your country, and play in the biggest games of all, which are test matches and World Cups,” Johnson says.

“If you don’t get yourself in England, rightly or wrongly, you’re not going to get the chance. If they really wanted to come and play, they’d be here doing it.”

Lawrence Dallaglio: “The best players in this country should play in the country. The rules are very simple. I don’t think they should be broken.”

Mike Tindall: “It sets a good precedent for England if they stick to it, because if they didn’t, that would open the door to others to move abroad, too.”

Martin Corry: “I don’t see any player playing overseas who is considerably better than what we have got at the moment.”

Jason Robinson: “England have to stick to what they’ve said all along, as it wouldn’t be fair on the guys who have sacrificed other opportunities to stay in the country.”

Premiership directors of rugby Richard Cockerill, Mike Ford, Conor O’Shea and Dai Young are all on the same page, while the most outspoken has been England hooker Tom Youngs.

“I don’t know how well it would go down with the whole team,” Youngs says. “It is not just the individual (rival) affected, but it is the other guys who might look upon that and might not agree with it.”

Whoa. Are England players that insecure? The strong culture in the side that Lancaster has admirably developed would suddenly splinter because of jealousy? If it was that easy, then the culture couldn’t have been that strong.

Internal competition is supposed to make a team better, and Youngs’ comments are a knock on his teammates’ ability to accept new faces, and Lancaster.

And it’s not like Armitage or Abendanon are strangers to Lancaster. Armitage crossed his path when he was head of elite player development, and picked by Johnson for five caps in 2009.

Abendanon played two Rugby World Cup warmup matches in 2007, and was summoned as injury cover for the final in Paris. He played under Lancaster with the 2010 England Saxons, and Johnson picked him in the training squad for the 2011 Six Nations.

Both headed for France believing they were no longer in the England selectors’ sights.

“Playing in France has rejuvenated our games,” Abendanon says, “and whether we get rewarded for that is up to Stuart.”

Armitage tried to return to England for this season until the attempt failed in October. His Toulon club were prepared to release the loose forward on a six-month loan, but the financial terms were too much for Bath, whose request for help from the English RFU was declined.

It’s ridiculous to believe picking him or Abendanon will ultimately bring down the Premiership. There are already a host of English players plying their trade in France and elsewhere. Everyone knows the rules and, just like in England, not all of the players are at a level that makes them test worthy.

This is about picking the best, a current issue in English sport with Kevin Pietersen on the outs with cricket officials.

And this is not about the Six Nations or friendlies. This is about a first Rugby World Cup at home in 24 years, and a chance to win a first title in 12 years.

England is still a work in process, unable to ignore help. Armitage has managed to stand out in a champion team of veteran internationals, while Abendanon was hailed for his “consistent world-class performances” this season.

They have their backers.

Will Greenwood, of the world champions of 2003: “The ability to invite them in and prove themselves in the warmup games, fine. They can play in the World Cup if they get invited, and they prove themselves at the camp throughout July and August.”

Tom Croft, the England flanker: “It’s about winning a World Cup. Whatever is the best way to win that cup is the way that I would go. That could mean picking English players playing in France or other countries.”

The ball is in Lancaster’s hands. 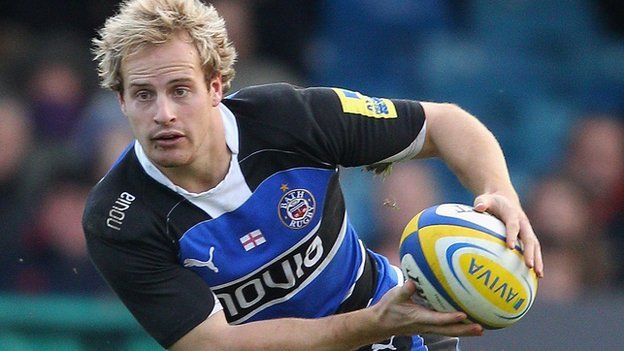