The Miami Heat embarked on a three-game road trip as they made their first stop at the Barclays Center to face the Brooklyn Nets. In their last game, The Nets were victorious over the Heat in what was Dwyane Wade’s final game in the NBA. Heading into this game, the Heat would have Derrick Jones Jr. return to their bench, while the Nets would be without Kyrie Irving due to injury.

Jimmy Butler and Duncan Robinson got the Heat on the board, as did Spencer Dinwiddie and Joe Harris for the Nets. After a three-point play from Robinson and Bam Adebayo each, Miami led 12 to 10 as part of their ten to nothing run. Brooklyn went on a ten to nothing run of their own, taking a 20 to 16 lead. Taurean Prince knocked down a three-pointer and a layup for Brooklyn, while Goran Dragic made a three-pointer of his own for Miami, followed by a layup from rookie Chris Silva. Both teams went back and forth in tying the game before the first quarter ended with two free throws from Dragic. Miami led 32 to 30 by the end of the first quarter.

DeAndre Jordan and Garrett Temple would get themselves on the board for Brooklyn with a dunk and layup, only for Justise Winslow to put Miami back in the lead with a pair of baskets. With the Heat leading 36 to 34, the three-pointers were falling for Brooklyn as Temple and Green knocked down one each, while Dragic and Butler kept the offense going for Miami. The Nets would take back the lead from Miami with baskets from Jarrett Allen and Dinwiddie. With Brooklyn ahead 57 to 53, they closed the second quarter on an eight to five run. Brooklyn led 65 to 58.

In the third quarter, Dinwiddie and Spencer picked up the offense for Brooklyn, knocking down baskets and layups, while Miami responded with a pair of three-pointers from Meyers Leonard. With Brooklyn leading 71 to 68, Miami would get back the lead for a few moments, only for Dinwiddie to take the lead back for Brooklyn, followed by a reverse dunk from Jordan. With Brooklyn leading 79 to 78, the Heat jumped back in front with a basket from Adebayo and a technical free throw from Robinson. Jordan would tie the game at 81 for Brooklyn, but it would be a jump shot from rookie Tyler Herro that would put Miami ahead once more, giving them an 83 to 81 lead by the end of the third quarter.

What an intense and heart-pounding game this was. There were many lead changes and ties throughout the contest, plus chances for both teams to breakaway from one another and go on a run during the second half. Miami had some moments were they could’ve taken the lead, but their defensive stops late in the game helped them make the most of their offensive opportunities.

For the Heat, Goran Dragic had 24 points, Jimmy Butler made 20 points, Kendrick Nunn with 11 points, Justise Winslow had 10 points, plus Bam Adebayo and Duncan Robinson were in double-double figures. Adebayo had 17 points and 16 rebounds. Robinson with 10 points and 10 rebounds.

For the Nets, Spencer Dinwiddie led the way with 29 points, Joe Harris made 25 points, DeAndre Jordan with 15 points, and David Nwaba with 10 points.

The Heat continue their road trip as they head north of the border to face the NBA Champion Toronto Raptors. Game starts Tuesday at 7:30pm and will be televised on Sun Sports. 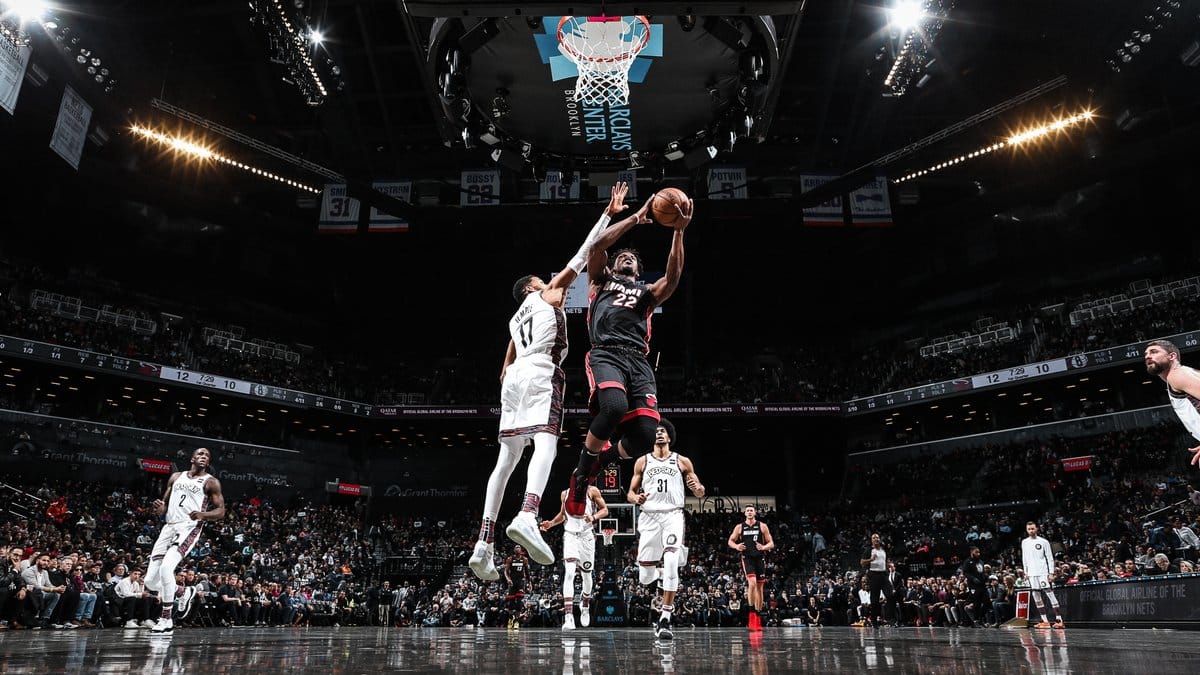