The pace of Cage Warriors 98 saw finish after finish in an exciting night of action.

Perry Goodwin had great success with a check left hook he had been countering with to finish Alexander Jacobsen. He shone with his in and out footwork and building combinations off his leg kicks. The opener began a night of exciting fights capped off by an absolute barn burner of a main event.

The Predator is on the hunt! ❌

Perry Goodwin lands flush and picks up the 2nd round KO 👏

The Semi Finals of the Featherweight tourney concluded this Saturday the 20th of October.

Undefeated Ross Houston fought a tough to claim the Cage Warriors Welterweight Championship to wrap up the night of fights in Birmingham, England.

In the first semi final bout Dean Trueman put on a flashy display against Monarch. Hard knees to the body, spinning early and often and even a beauty of a superman punch into a takedown.

Both men displayed stellar grappling ability but in the end Trueman pushed the pace on the feet and defeated his opponent, moving on to a crack at the Featherweight belt.

The second semi final bout for the Featherweight belt  ended in Lee becoming a human backpack and choking his man along the fence with 18 seconds left in Round 1. Lee imposed his will early in the grappling department when his winging left hooks missed. It payed dividends to switch it up and hos aggression bagged him the win.

With only 18 secs remaining in round 1, Aiden Lee submits his opponent to secure his place in the finals 👏🏆

What a fight 🔥 #CW98 pic.twitter.com/HGOJx7t0wG

He had choice words for Dean Trueman, his soon to be opponent for the Featherweight belt.

It's official: @aidenleemma vs @DeanTrueman for the Featherweight Title, #CW100, December 8th! 🙌🔥 What's your prediction? pic.twitter.com/UmGUVKwmiK

Paterno won the exchanges in the early goings and it looked like experience would be the deciding factor of this fight.

Houston had trouble finding his range with a snap kick.  The snap kick is an old staple of Karate that has found its way into MMA. The snap kick reaps great rewards without compromising and burning a lot of energy. The kick landed hard between rounds 3 and 5 and looked to drain Paterno with every thud to the midsection.

The champ also had a difficult time dealing with the size of Ross Houston who would barrel him to the fence and work from there.

Paterno’s right hand got him into to trouble as he was so insistent on landing it. Houston sought to make his opponent pay for his enthusiasm.

Paterno finds a home for the right hand

Attempts of the right hand had been winging over the top for Paterno the whole night. In the final round the punch found its mark and sent Houston falling to the canvas.

Houston rallied and finished the round.

When a fight as close as this reaches the scorecards it often goes to the champion. Ross Houston showed up in a big way against a tough opponent and got the nod from the judges.

An absolute war. After a back and forth fight, we go to the judges scorecards to find out who won the #CW98 main event and takes home the Welterweight Title 🏆 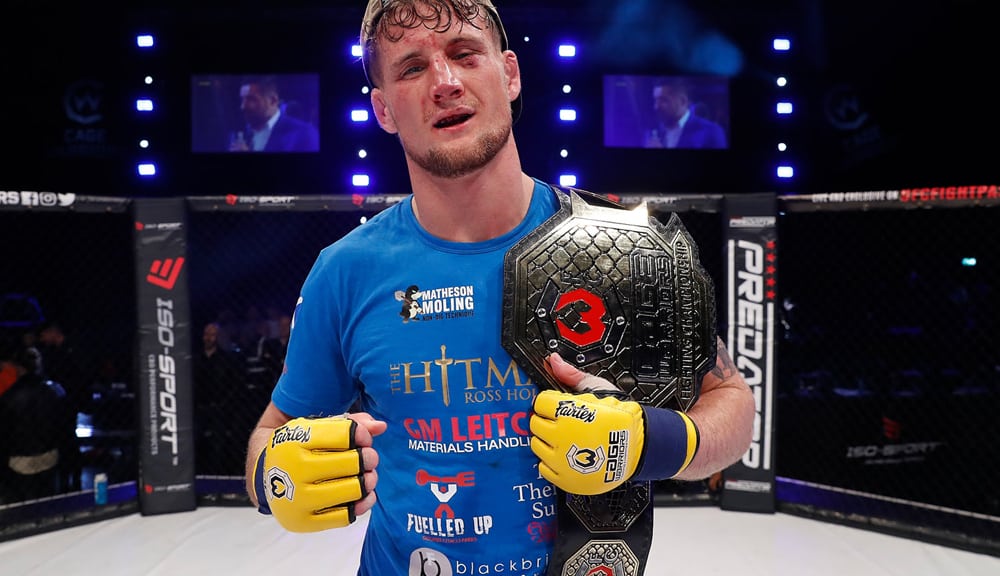