Floyd Mayweather – The Best Ever?

Let me be clear; I’m no fan of Floyd Mayweather Jr. I don’t like what I’ve heard about him or from him as a man and I didn’t particularly care for his “defense-first” style of fighting.

That having been said, Floyd Mayweather is the owner of a somewhat gaudy 50-0 record – okay, 49-0 if we subtract the abhorrent 50th fight against a non-boxer in his first-ever professional boxing match.

At 49-0, we all know who that puts him in company with, Rocco Francis Marchegiano. But if the casual fan were to put Floyd in the same conversation as the beloved Rocky, that casual fan would be taking his life in his hands. Rocky Marciano fans don’t tolerate favorable comparisons to “their boy”, lightly.

Still, many fans, casual and serious, and led by Floyd’s number one cheerleader – Floyd, rate Mayweather as the best boxer in the history of pugilism.

I don’t think he is – not by a long shot – but fair is fair. Floyd’s claim isn’t without merit. 49-0 doesn’t happen by accident. So, before we relegate the claim to the junk heap, let’s look at his career more closely.

Floyd Mayweather didn’t really bang, hence only 26 knockouts in his first 49 wins. (For the purposes of this article, I am not going to include his win over McGregor) He beat you with slickness, punching accuracy, perhaps the best defense in the sport’s history, and a boxing I.Q. second to none.

Several of his opponents have said that being in the ring with Floyd was like “fighting a ghost.” You just can’t hit him ‘solid.’ One vanquished fighter said after losing to Mayweather, “Hit him? I couldn’t even find him. Felt like I was shadowboxing by myself – except I kept getting hit!”

The list of what Floyd Mayweather has achieved is truly astonishing! That is beyond dispute. So, when Mayweather says he is the “greatest-ever”, he’s not saying it without pretty compelling evidence to support his claim. This then leads to the question, “Why do so many fans and pundits reject the claim outright?”

I think the answer to this is really quite nuanced. I’ve broken down what I believe to be the many parts to this reaction into five basic parts.

1. Floyd Mayweather’s personality: There’s no getting around it. Floyd’s public persona is that of a bit of a jerk. He’s a braggart, an apparent abuser of at least one woman, and arrogant beyond belief.

He seems to delight in pissing people off (I’m thinking Larry Merchant, here). Floyd has assumed the mantle of the quintessential “bad boy.” Rocky Marciano didn’t walk around with satchels of money to show off to people.

I’m not sure that Joe Louis ever said that he was the greatest boxer ever – even though he must have heard that said about him daily. Ali did, but with Ali, it seemed different.

There was always a “showmanship” quality to what Ali said and did, and most people recognized it for what it was; a funny and outrageous, but tongue-in-cheek way to sell tickets.

2. Floyd Mayweather’s boxing style: As I mentioned earlier, Mayweather was a “safety first” fighter. He took the scientific aspect of “hit and don’t get hit” literally.

This led to many master classes in technical boxing skills throughout his career, but very little ‘edge of your seat’ stuff. Jim Lampley, a noted boxing commentator, said this of Floyd,

Because it becomes abundantly clear that his very intelligent choice is, ‘I don’t have to take that risk.

I’m not going to take that risk. I will win every fight easily on the basis of my extraordinary craft, my amazing, kinetic understanding of what’s going on in the ring, my unique ability to read opponents.’

Mayweather lulls and baits his foes. He outlasts them, outpoints them and outboxes them. Al Bernstein, the veteran Showtime analyst, likens Mayweather’s style to the four-corner offense employed by legendary college basketball coach Dean Smith at North Carolina: Get the lead and run out the clock.”

Now, this is all very effective, but it puts fans to sleep. The highly respected Freddie Roach once said that he’s actually fallen asleep at a couple of Floyd Mayweather’s fights. It’s hard for fans to credit you as the greatest fighter of all time if they’re nodding off as you ply your trade in the squared circle.

3. The Alphabet Boys: Yes, Floyd Mayweather can lay claim to a ton of world titles in a host of divisions, but how seriously can one take the IBO welterweight title and even I had to look up who the heck the IBA was/is given that he had sported their title too.

Yes, he fought in lots of divisions but to be fair to the great boxers of yesteryear, those divisions didn’t exist, so they never had the chance to be umpteen division champs. I’m pretty certain that Henry Armstrong would have held titles in 6 or 7 divisions, had they existed when he fought.

4. Outrageous decision: Perhaps nothing takes away from Floyd Mayweather’s “unbeaten record” in the eyes of his detractors more than the outrageous decision he was awarded in his bout with Jose Louis Castillo. In 2002, Castillo beat Floyd around the ring for 12 rounds.

He was the clear winner in the eyes of virtually all – but the judges. Those three gifted Floyd a unanimous decision by scores of 116-111 and 115-111 twice. It was ridiculous.

Floyd Mayweather has lost that fight – clearly. In fact, the fight is almost always included in the various lists of “worst ever boxing decisions”. For this reason, many fans do not credit Mayweather with his 49-0 record.

5. Quality of opposition: Now, this one is controversial. I mean, after all, I just talked about his beating some 24 world titlists – a record. Floyd won so many titles, in so many divisions, that it seems foolhardy to argue that the level of opposition he faced wasn’t up to scratch. But here’s Floyd’s problem.

He toiled in the post-Hagler, Hearns, Leonard, Duran era. Through no fault of his own, he never fought any of the “four horsemen.” In my humble opinion, Floyd goes 1-3…maybe 2-2 against these gentlemen.

I think he beats Thomas Hearns, maybe beats Roberto Duran if Duran’s not at his best, loses to Leonard and gets destroyed by Marvin Hagler. I’m not alone, either. We’ll never know, of course; but as a boxing fan and former boxer myself, I “know” he doesn’t go undefeated against these gents; ergo, goodbye claim to be the greatest because of his undefeated record.

I know what his supporters are going to say, “Dave, he fought and beat, Miguel Cotto, Zab Judah, Canelo Alvarez and Manny Pacquiao, among others.” To this, I say, “Yep…but none of those guys beat any of the “Big-4″ …none of them!” In fact, I would argue that Floyd never fought anyone who would have beaten those gentlemen.

So, with all of that said, how do I then argue that Floyd Mayweather’s claim to being the best is not without merit? It must seem inconsistent. It isn’t, really.

My point is that his claim has substance. It doesn’t mean that I, or anyone else for that matter must agree. But it also means, that his claim shouldn’t just be dismissed out of hand.

One of the people whose opinion I most respect is that of a friend of mine, John LiPari. He’s as close to an expert on Floyd’s career as anyone I have ever met and he’s done some tireless research on the man. Here are some of the highlights of his work on Floyd. Mayweather was:

• 24 wins against men who have held, or still hold, a world title

• More awards and accolades than one could hope to count

That’s simply amazing. There’s no other word for it. People will be inclined to argue (myself included) that there are too many organizations, too many weight classes and that boxing is watered down compared to what it used to be.

I agree with all of that. But I think we, as fans and pundits, are missing something here. Even if all the criticisms of modern boxing are true, how come no-one else has done what Floyd has? Why don’t we have a slew of Mayweather’s?

The answer has to lie in Floyd Mayweather simply being better than everyone else in the modern era – and by a lot! Forget the past for a moment. Show me any boxer in the last 10 years or so with a resume to match Floyd’s?

You won’t be able to – and that’s why Floyd Mayweather’s claim to be the greatest of them all has merit. He has honestly done things no other boxer in history has. It’s not fair to just ignore these accomplishments because we don’t like the guy.

Speaking of us not liking Floyd, there’s something else I want to touch on as well. I’ve already canvassed the matter of Floyd being an obnoxious sort; as have so many others. But, is it possible that he’s just an “abrasive Ali” and that he is, in his own way, just trying to sell tickets as well?

I throw this out there because during my research for this article, I came across some examples of Mayweather’s humanity and compassion that are hard to ignore. Here are a few examples:

• Paid for the funeral of Genaro Hernandez, the man he beat for his first world title

• Paid for the funerals of Joe Frazier and George Floyd

• Has paid for the funerals of at least 17 other people; mostly just down and out folks who died tragically

• Established and funded out of his own pocket, a foundation for at-risk and underprivileged youth

• Contributes monthly to food banks (not insignificant amounts, either)
And these are just the tip of the iceberg. What I find most impressive about this, is that he does so anonymously and without fanfare.

In fact, for this sort of thing, Mayweather shuns the spotlight. It certainly flies in the face of what we so commonly hear about Floyd, doesn’t it?

You know, come to think of it, Floyd, “best boxer ever” or not, maybe we should cut you some slack. Maybe you’re not so bad after all. 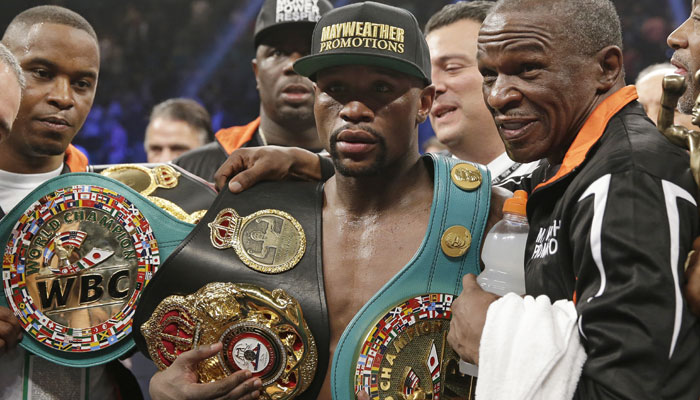 Is Floyd Mayweather Jr. The Greatest?


Floyd Mayweather didn't really bang, hence only 26 knockouts in his first 49 wins. (For the purposes of this article, I am not going to include his win over