Lennox Lewis is a man who has always shouldered the burden of high expectations. When you are a gifted athlete, who hails from London, the very city in which The Queensberry Rules were drafted, the nation’s hopes of reclaiming boxing glory rest upon you. He’s 6’5” stature, combined with his God-given muscularity make it a synch that he would be successful at any sport he vested his efforts in. He could have easily been a tight end on the gridiron, displaying his talents in the NFL every Sunday; instead, he chose to make his name inside the ring and become one of the legends of boxing.

Due to high expectations, and circumstances out of his control, it took Lewis years to garner the respect his talent warranted. And that’s when “The Lion” emerged. He persevered through the Serengeti of professional boxing until he could finally lay claim to being King of the Jungle. How did a man whose aggression inside the ring was questioned by his earliest amateur coaches finally reach the pinnacle of the sport? To discover the answer to that question, we’ll have to take a trip down memory lane, examining the highs and lows along the way…

Due to the fact that he’d moved to Metropolitan Toronto with his mother when he was 12-years-old, Lewis represented Canada in the 1984 Olympics when he was just 18-years-old. He failed to medal at those games, and thus decided to remain an amateur and return to the Olympics four years later.

In 1988, now a seasoned amateur with plenty of experience under his belt, Lewis returned to the Olympics in Seoul, Korea on a mission to capture the Gold Medal. As a Super Heavyweight, he faced Riddick Bowe of the United States in the Gold Medal round. Lewis’ height and timing were a problem for Bowe, who was used to being the taller man inside the ring. Bowe stood 6’4” and Lewis was an inch taller than him. The usual size advantage and the strategy of keeping opponents on the outside with the jab would not work against Lewis.

In the second round, Lewis stole the momentum of the fight and began to land several nice combinations. This led the referee to give Bowe two standing eight counts; after the second one, he determined Bowe could not continue and Lewis was declared the winner. Immediately following the fight and in every subsequent interview of his career, Bowe would claim that the stoppage was premature and he had been robbed of his chance to compete for gold. To most casual observers, however, the referee’s decision was correct. Lewis was the superior fighter and his winning of the gold medal was well deserved.

The famous ringside announcer and boxing historian, Larry Merchant, once said “There are too many governing bodies. I think they’re all corrupt.” This quote, while delivered in a tongue-in-cheek manner after a post-fight interview, sheds light on the worst kept secret in boxing: sometimes the business side of the sport interferes with the integrity of the sport.

No matter what weight class he’s in, every fighter will be faced with this reality at some point during their expedition into the professional ranks. In 1992, it was Lennox Lewis’ turn to be confronted with boxing’s unfair politics. These events would have a domino effect on his entire career. In a drama fit for a Shakespeare play, the turbulence in Lennox’s quest for the heavyweight crown would emerge through his old nemesis, Riddick Bowe.

In 1992, Riddick “Big Daddy” Bowe reached the pinnacle of his career when he defeated Evander Holyfield to become the undisputed heavyweight champion. Lennox Lewis, who was also a professional by this time, was declared the mandatory challenger by the WBC. To their credit, the WBC’s logic in making Lewis the number one contender was very solid. Not only had he enjoyed an impressive run as a professional, but he was also the last man to be Bowe inside the ring, albeit as an amateur four years prior at the Olympics.

The Quest for Respect

Although the way in which he garnered the belt was no fault of his own, it did not stop some members of the media and uninformed casual boxing fans from criticizing Lewis. Sure, the ideal way to become a champion is by dethroning the title holder inside the ring; but what is a number one contender to do when the champion flat out refuses to fight him? Lennox Lewis desperately wanted to fight Riddick Bowe. Accurate historians must write that Lewis was the man being dodged, not the other way around.

After three successful defenses of his WBC crown, Lewis was defeated by American challenger Oliver McCall, in what remains a controversial decision. Lewis mustered the strength to get up from the canvas before the count of ten after being hit with a great right hand by McCall; however, the referee ruled that Lewis was too dazed to continue and McCall was declared the winner. Lewis would argue that he had not been given a fair to chance to persevere but his arguments fell on deaf ears. He was no longer the champion.

It would be two and a half years before Lewis would get another crack at McCall. The WBC belt was again on the line; only this time the belt was vacant and the winner would be declared the winner. Unfortunately, the moment would be anticlimactic. Lewis dominated the first five rounds of the fight, but McCall was strangely inactive in rounds four and five. Before the start of the sixth round, McCall was having a visible breakdown and began to cry in his corner. The fight was called off and Lewis was declared the winner. He had regained his heavyweight championship, but yet again an untimely subplot dominated the headlines.

In 1999, Lewis again surrounded by controversy when his bout against Evander Holyfield was the subject of an extremely controversial decision by the judges. The fight was held at Madison Square Garden and had received the most pay-per-view buys in the history of the sport. Most observers thought Lewis cruised to victory and the New York audience waited with baited breath for him to be declared the winner by unanimous decision. However, instead of becoming the undisputed heavyweight champion, the fight was declared a draw. Lewis would retain the WBC belt while Holyfield would remain the WBA and IBF titles.

Later that year, the two men would meet in a rematch in Las Vegas. This time, Lewis would be more dominant than he was during their first meeting, leaving nothing to chance. He was declared the winner by unanimous decision. At long last, the man who had been doubted by the public ever since the 1984 Olympics was finally the Undisputed Heavyweight Champion of the World!

Lennox Lewis’ career seemed to be more about self-actualization than money or achievements. While other fighters had larger-than-life personas, Lewis was always widely known as the best heavyweight boxer in the world, nothing more, nothing less. However, in overcoming the loud naysayers and the unexpected setbacks, he handled every obstacle that came his way with grace.

When he was beaten by an inferior boxer named Hasim Rahman on a lucky punch, Lewis responded by putting on a vicious display of power in the rematch and leaving little to no doubt who the real champion was. When Mike Tyson went on a post-fight tirade during his interview, saying he wanted to “eat his children,” and declaring himself the real champion, Lewis responded by dominating Tyson in a one-sided affair in 2002.

Lewis’ last fight would occur in 2003 when he defeated future champion Vitali Klitschko. Lewis was 37 years old, and it was apparent that Klitschko would most likely win the rematch that the public was clamoring for so desperately. Some would see his retirement as a convenient way to bow out. However, the more accurate narrative would be that Lennox had conquered all the giants of his era and that he wisely saw that a new generation was poised to take over. He is the only heavyweight to beat Riddick Bowe, Evander Holyfield and Mike Tyson. While all three of them generated more publicity and were more popular than Lewis during their perspective title runs, most historians agree that at his peak Lewis may have been better than them all. What more is there to prove?

ALSO READ:  Hagler v Hearns – 7 minutes 52 seconds of war that produced the fight of the 80s and an all-time boxing classic
Embed from Getty Images

In the ‘90s and early 2000s, the heavyweight division was largely dominated by Americans. Mike Tyson, Evander Holyfield and George Foreman were the most well-known heavyweights on the planet and the concept of a champion from outside of the United States was not seen as very likely. Lennox Lewis changed all of that. He proved that hard work knows no boundaries, geographical or otherwise.

Immediately following his retirement, the reign of the Klitschko brothers loomed over the sport with an iron fist. Both men seemed invincible and each man benefitted from the sacrifice that Lewis made before them. His career paved the way for heavyweights from all over the globe to get a chance to compete based on their talents, not the publicity machine surrounding them. Years later, Anthony Joshua and Tyson Fury, rose to stardom when they each defeated Wladimir Klitschko to begin their perspective reigns as champion. They are currently the two biggest stars in British boxing and two of the most famous sportsmen on the planet. None of that would be possible without Lennox Lewis.

Modern sports fans have frequently dived head first into hypothetical debates about how legends of the past would fair against greats from different eras, including the athletes of today. Lennox Lewis was ahead of his time. He was a classically trained athlete with the versatility to compete in multiple sports. He ushered in the super heavyweight era, where a man of his stature could enter the ring tipping the scales at more than 250 pounds and still be agile enough to compete with men who were considerably lighter in weight.

“The Lion from London” was fast, strong, intelligent and skilled. That means he could compete with anyone in any era. When fans mention the greatest men to ever grace the heavyweight division, they would do the sport a disservice to omit the name, Lennox Lewis. He’s as deserving as any man who’s ever stepped foot inside the ring. 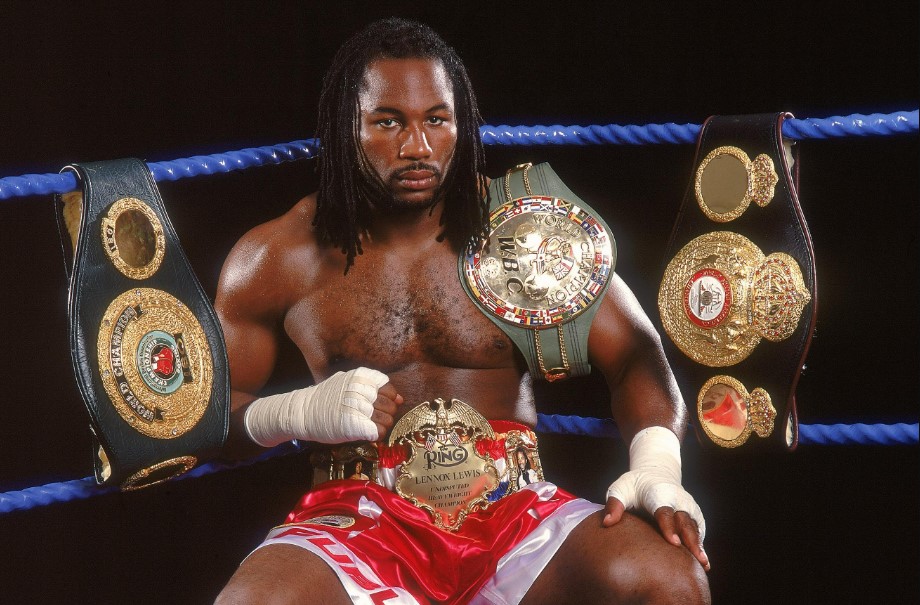