The Washington Wizards lost to the Philadelphia 76ers 123-98 on Friday night. Joel Embiid had a double-double with 16 points and 15 rebounds and Ben Simmons was two boards shy of a triple-double with 13 points, 8 rebounds and 10 assists. This game was basically over at halftime as Philly only needed to show up to defeat a Wizards squad without Dwight Howard and Otto Porter which made them shallow.

The same stuff is happening and is starting to get sickening. Washington did next to nothing on the defensive end and right at the beginning, Philly had already built an 11 point lead. Philly didn’t shoot particularly well as they were just 11-of-29 from the field in the first quarter, but Washington gave them plenty of second-chance opportunities. The Sixers had nine rebounds off of 18 misses which led to many easy baskets.

Washington was also very shallow. No Dwight Howard and Otto Porter led the Wizards to put Jeff Green in the starting lineup right before tip. This meant that the Wizards did not have much depth and it made life so much easier for the Sixers. Here are some of the takeaways from tonight’s game. 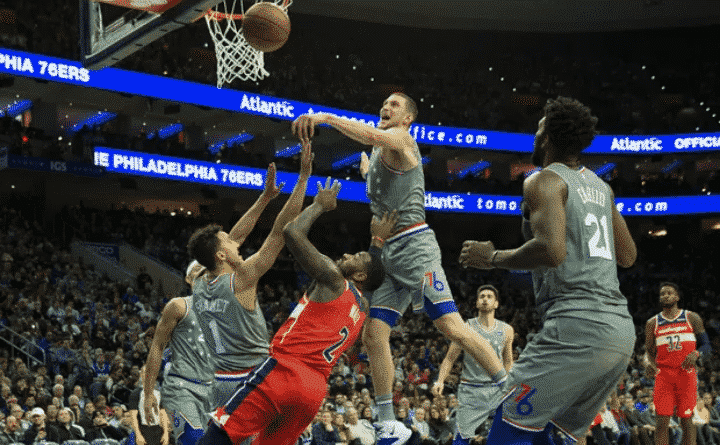 No defense, too much isoball, getting killed on the boards. Yep, same old Wizards. Nothing changes and nothing will. It is getting to the point where many fans are probably getting mentally ill watching this team so let’s look at the one positive on the Wizards currently.

Thomas Bryant had the tough duty of having to guard Joel Embiid tonight. As many Wizards fans have seen with Thomas Bryant, it is not so much the skill-set that is impressive, it is the effort that pleases every fan. When Bryant beat Embiid down the floor and John Wall fed him a no-look pass, it was very pleasing to the eye.

Bryant was also able to challenge Embiid on defense. Sure Embiid will own Bryant but it was encouraging to see the young center take huge steps forward in such a short amount of time.

Normally, Troy Brown usually ends up playing in garbage time. But tonight, he got his chance due to Otto Porter not being available due to personal reasons. Brown ended up getting 4-plus minutes of meaningful playing time late in the first quarter and early into the second.

Brown had a tough task guarding Jimmy Butler. However, all of the things Brown was expected to do happened. He played solid defense, was under control, and did not make any boneheaded mistake.

The team was too shallow

On some nights where the Wizards badly get blown out, you would expect better bench production. However, with Otto Porter and Dwight Howard not being available, it led to some of Washington’s better bench players starting. This led to both units being very shallow and uninspiring.