When a night ends with 20,000 fans in the Toyota Center standing to their feet in unison giving a round of applause, something special has just occurred. There was excitement in the air during UFC 262, part of which had to do with the electric atmosphere and part of which was due to the performances themselves. On the main card filled with seasoned fighters with big reputations, every fight was entertaining and the most dramatic moment occurred at the climax. Let’s get into it.

Barboza revealed his game plan early in round one. He started the fight with impressive calf kicks that echoed throughout the arena. He kept Burgos guessing and even went upstairs with sudden strikes. The most impressive moment of the round was a spinning kick from Barboza that caught an unsuspecting Burgos on the side of the face.

Although the momentum was clearly in his favor, there was cause for concern for Barboza in round two as a split shin caused him to bleed profusely. This was the best round of the night for Burgos, who got into some nice striking exchanges. He may have even walked away with this round on some of the judges’ scorecards.

In round three, Barboza closed the show in spectacular fashion. An overhand punch landed squarely on the chin of Burgos, who initially absorbed the shot but ultimately stumbled backwards into the cage as a result of the impact. Barboza began to ground and pound his opponent, at which point the referee wisely stopped the fight.

Neither fighter could establish momentum in round one as they seemed to be feeling one another out. The round ended with a grappling exchange against the cage in which neither woman could score a takedown.

Araujo dominated the beginning of round two, scoring a nice pin-down and establishing position. However, Chookagian was able to force her way out of the takedown and ended the round with a couple of nice striking combinations.

In round three, Chookagian established herself as the more aggressive fighter. She applied pressure to Araujo the entire round. Her sequence of a left hook, followed by a right uppercut and a strong knee to the face of Araujo clearly swung the round in her favor. With two rounds being fairly even and tough to decide, Chookagian’s dominance in round three was most likely the deciding factor. She walked away with the unanimous decision victory.

Bontorin started round one with calf kicks that established the momentum in his favor. Later in the round, he hit Schnell with an overhand right that stunned him and knocked him off balance. Other than that, the two men spent the majority of the round trying to get a feel for one another.

Round two was very close, but Bontorin was able to get the attention of the judges with a striking combo that caused oohs and ahs to reverberate throughout the crowd.

With the outcome of the fight hanging in the balance, Bontorin sealed the victory with a dominant third round. He started the round with a great combination that left Schnell wincing in pain. Finally, a takedown in which he was able to establish the dominant position removed any doubt as to which fighter was having the better night. Bontorin walked away with the unanimous decision victory.

An early takedown by Dariush and superior grappling skills gave him a decided edge in round one. Ferguson was able to return the favor in round two with an impressive takedown of his own. However, after finding himself on the wrong end of a headlock, Dariush was able to dominate the last three minutes of the round with strikes and kicks.

Ferguson was never able to recover from a heel lock that Dariush established in round two and the injury hobbled him for all of round three. With his mobility severely compromised, it was all Ferguson could do to survive the round. Dariush dominated the final round from start to finish and it was a pretty easy decision for the judges. He walked away with the unanimous decision victory. The loss is the third in a row for Tony Ferguson and one has to wonder if we’ve seen the end of his reign as one of the elite fighters in the division.

The most highly anticipated match of the night certainly did not disappoint. Oliveira started round one with an impressive takedown that left Chandler severely compromised. However, Chandler displayed why he is known as one of the strongest fighters in the division when he was able to maneuver his way out of a chokehold that would have caused most fighters to tap out. He followed up with impressive striking combinations that Oliveira had no answer for. Round one clearly went to Chandler.

In round two, Oliveira refused to let the opportunity he’s worked so hard for slip away. He charged out of the gate and hit Chandler with an overhand punch he never saw coming. It was the sort of blow that can end a fight and that’s precisely what happened. With Chandler stumbling backwards into the cage, Oliveira pounced on him and pummeled him with strikes that caused the referee to stop the fight.

The roar of the crowd reminded anyone watching at home of how sports have sorely missed packed arenas. Oliveira jumped out of the cage and gave the announcers a high five before running over to Dana White to give him a celebratory embrace. It was a special moment. This night did not disappoint; every fight on the main card had memorable moments and the audience was engaged from start to finish.

Charles Oliveira officially fought more fights to win his first title than any other fighter in UFC history. Hats off to him. His persistence in pursuing his dream should serve as an example not to focus on obstacles, but to instead focus on goals. Society has often encouraged people to look for excuses and point fingers at others when their life does not amount to what they want it to be. Charles Oliveira’s long journey to the championship should be a reminder to all of us that the responsibility for success or failure lies with the individual. Internal motivation should always take priority over external excuses. 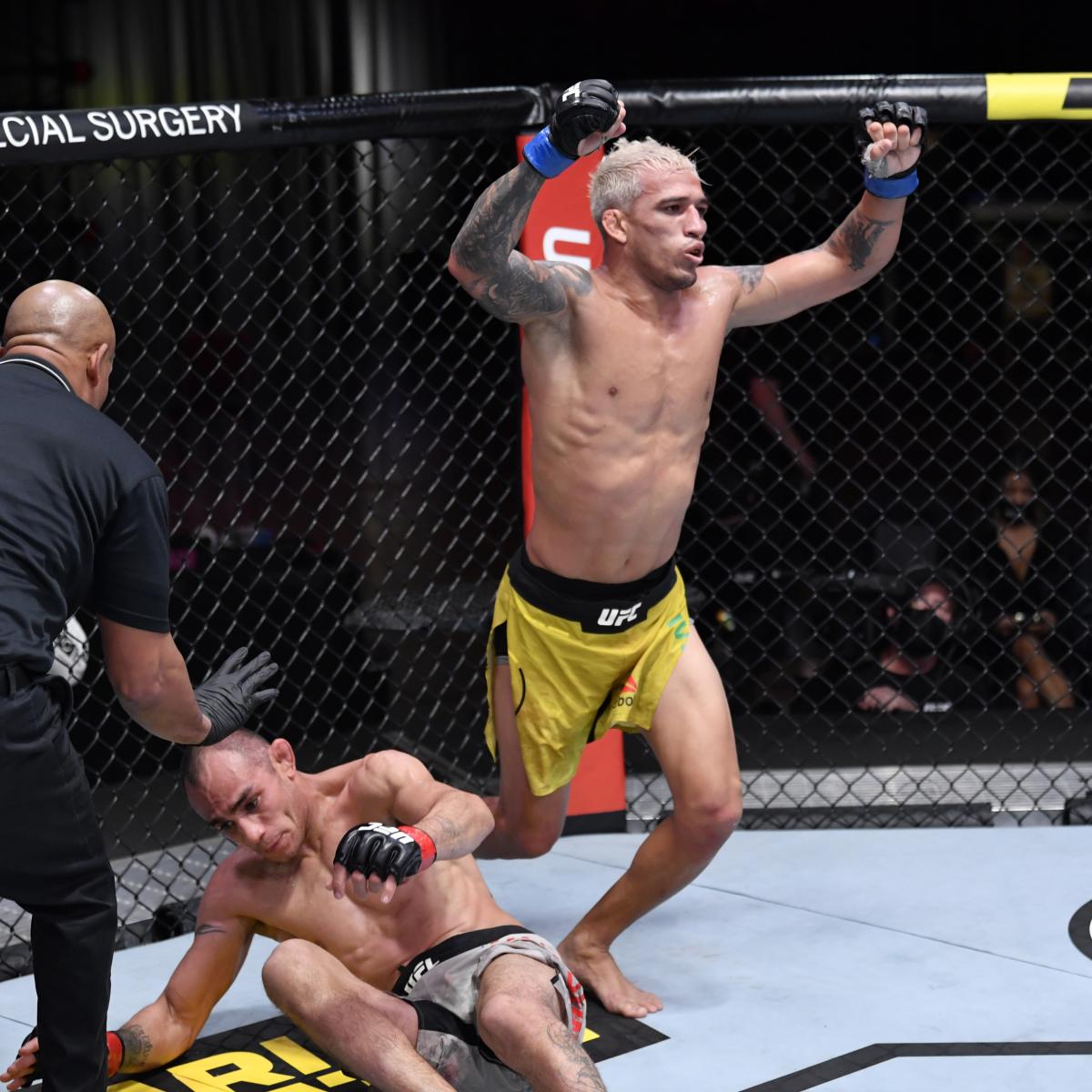