University of Phoenix Stadium played host to Super Bowl XLIX where the Seattle Seahawks faced off against the New England Patriots. Coming into the game, both teams still had some things to prove to a national audience that had seen quite the definition of spectacle before the big game even dawned upon us.

The Patriots were coming off of their “Deflate Gate” situation, which of course is referring to their use of under-inflated footballs in the AFC Championship Game played against the Indianapolis Colts that ended in a 45-7 rout in favor of New England. Accusations came from all directions as quarterback Tom Brady and head coach Bill Belichick fought fire with fire as they did what they could to keep their reputation from being tarnished.

And then Sunday came.

This game certainly lived up to the hype we received for the two weeks leading up to, that’s for sure.

The first quarter, although scoreless, showcased the strengths and weaknesses of both teams even though the scoreboard remained untouched. In the second quarter, Tom Brady was able to throw two touchdowns, one of which was to Rob Gronkowsi, but Russell Wilson and the Hawks seemed to have nothing but answers as they responded perfectly and went into the half tied at 14-a-piece.

In the third quarter, the Seahawks dominated and looked like they might take this one from an otherwise unbeatable and legendary quarterback as they did last year against Peyton Manning and the Denver Broncos. Last year’s game ended 43-8, so I may be getting ahead of myself in the comparison, but Seattle was able to rally off ten unanswered points going into the final quarter of play.

Up 24-14, things looked nothing but good for Seattle. But Brady, as you know, had other plans.

A drive down the field just past halfway in the fourth that resulted in a short Danny Amendola touchdown made the deficit just three points at 24-21. About five minutes later, just before the two-minute warning, Brady hit Julian Edelman for the fourth Patriots touchdown of the game and the one that finally gave New England the lead.

Now down four points and trailing 28-24, Russell Wilson and the hot Seattle offense was going to get one final drive to try to show that they could repeat.

And they would come up one yard short.

After a miraculous (and even that word doesn’t do it justice) juggling catch by Jermaine Kearse, the Patriots were reminded of not long ago when David Tyree made the helmet catch while playing for the New York Giants en route to New York spoiling New England’s previously perfect season.

Funny thing is that those plays all happened in Arizona in the same stadium.

For some great, unknown and forever hated reason, Pete Carroll decided to completely disregard the best running back in the game with a repeat one measly yard away. Instead, Carroll thought it would be great to try to throw a slant pass to a well aware and waiting New England secondary.

But really, what was he thinking?

We may never know how one can really justify such a decision, but all I can say is that he better hope and pray that Seattle’s 12th Man is forgiving. It would be a real shame to see Seattle’s fan base turn on their head coach from here on out.

But only time will tell, so now we wait. 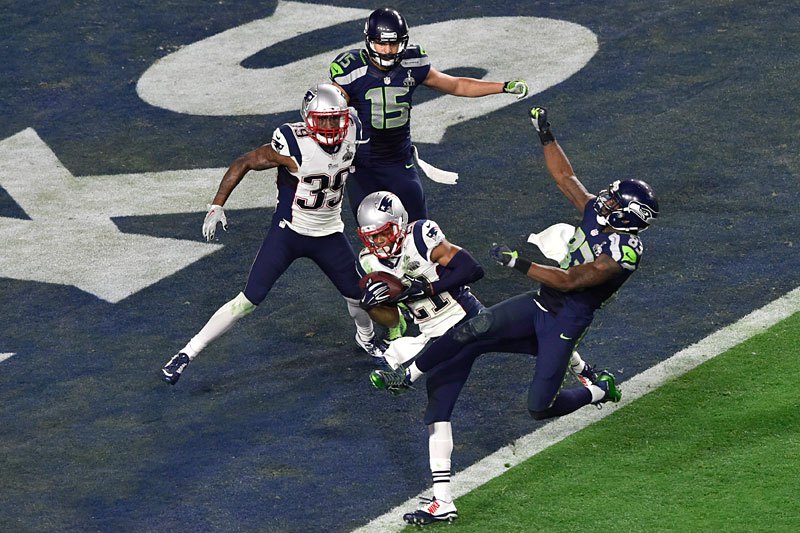