If we go back to the beginning of race weekend, Friday practice sessions ended up being the most racing we would see. The conditions on Friday alternated between dry tyres and intermediate tyres which proved to be a difficult task for the teams to manage.

In FP1 Valteri Bottas topped the session with Max Verstappen in second and Pierre Gasly in third, in the Friday sessions it seemed to be that Bottas had incredible pace and was actually getting more out the car then teammate Lewis Hamilton. This was then further proven when it was the end of FP2 as Max claimed first, Bottas finished in second with Hamilton finishing in third.

However, I can only imagine that Bottas’s focus and mentality would’ve been diminished as he knew the highest he could start on the grid for Sundays “race” would be Sixth place as he had a 5 place grid penalty from the catastrophe that occurred in Hungary.

The Belgium Grand Prix was a race that was packed with chaos and unexpected events, as well as events it also broke a couple records despite it being the least entertaining Grand Prix.

Furthermore, in FP3 the standings seemed to change a little as both Red Bull cars managed to finish first and second, Lewis Hamilton then finish the top 3 with Bottas ending in 11th.

I think we can all agree that the most shocking result was that George Russell got his Williams on to the FRONT ROW.

George had said after Qualifying that his team had agreed if they had got out of Q1 it would’ve been amazing considering the data they had from the practice sessions, however, now we all know that the Williams has insane potential in the rain and in the future we could potentially see this again.

In Q1 there was some tyre issues and confusion, everyone had gone on to full wet tyres apart from the Williams team who opted out to go on Intermediates.

Before you knew it everyone had completed their lap and Williams were 1-2, this had obviously changed after some other people set their lap but both cars progressed into Q2, with both Haas’s and Alpha Romeo’s as well as Yuki Tsunoda being eliminated.

Q2 saw late drama as both Mercedes cars had not set a good enough lap to progress into Q3 and it was the dying seconds off the session. However, Hamilton and Bottas managed to pull a lap off that was able to bring them into Q3 in which we saw both Ferrari’s, Alonso, Stroll and Latifi be knocked out.

Moving on to Q3… well lets just say it started pretty poorly, the weather conditions had picked up and now the drivers were on full-wet tyres and they were barley able to manage. We had radios from the drivers saying that there was Aquaplaning on the straights and visibility was practically impossible, the tyres were also incredibly difficult to get up to temperature with Gasly reporting his tyres were at -40°C.

Sebastian Vettel was livid on the Radio that the FIA were not Red-Flagging the session as the conditions were to bad to do Qualifying in. The Red Flag did come out however not for the reason anyone wanted it to be, Lando Norris had started his timed lap and as he was going through Eau Rough/Raidillon he had a massive shunt into the barriers which saw the session to be postpone for some time.

Fortunately Lando was all good. He had been taken to hospital for checks on his Elbow and later on it was confirmed by McLaren and himself that he was all good and was able to race tomorrow.

The rest of Qualifying was filled with pure and utter excitement, towards the end of Qualifying the drivers went out for their final lap and everyone witnessed the unexpected. George Russell had set his lap time and put his Williams on Provisional Pole, with Hamilton then setting his lap time and going behind Russell the world erupted.

Unfortunately, that was short lived as Max Verstappen was able to snatch pole of Russell but it was still insane. Everyone was stunned that a Williams would be lining up P2 on the grid for tomorrow’s race.

The Shortest Race In F1 History…

Sadly we were not treated to a race on Sunday, as much as we all wanted to witness a brilliance and masterclass in the rain, the drivers safety always comes first. The conditions were far to bad to drive in and someone seriously could’ve got hurt which no one wants. As well as the drivers safety one thing that could’ve been a factor in which why the race was not resumed could be the ‘cost-cap’.

Each team so far has had their financial struggles and complaints which has lead to a lot of drama. The last thing the FIA and the teams wanted to deal with was financial problems.

Every team has struggled with money this year so maybe that was a big factor in why the race was not resumed.

Most fans wanted the race to be postponed until tomorrow in hope that a race would be able to take place then. However, the FIA had a different idea and just decided to have a 2 lap race and award half points…

As that was the FIA’s decision it meant that the 2021 Belgium Grand Prix was now the Shortest Race, Slowest Race and the first ever 100% Safety Car Race in F1 History.

Drivers had their own say on the race as Lewis Hamilton made a comment saying “Fans should be refunded” which I think everyone agrees with, as the fans manage to sit there in the pouring rain for more than 4 hours they definitely deserve a full refund.

George Russell was a happy man as it meant he was able to score his first ever podium in F1 as they went of the Qualifying results to determine the final grid order.

As well as this Lando Norris decided to take a humours outtake on the race when Max was having his interview and Norris came up to him saying “Great race mate, unbelievable drive” in which Max responded “Yeah it was really tough”. Lando decided to say “I was catching you..” in which they both laughed and continued having their interviews.

Overall, it was disappointing to not witness a race on Sunday but it was too dangerous to race, someone could’ve been tragically hurt considering how the Belgium is notorious for its deaths and injuries so it was the best that they didn’t drive. At least we all witnessed the most surprising Qualifying of the season and all have high expectations for the next race in Zandvoort. 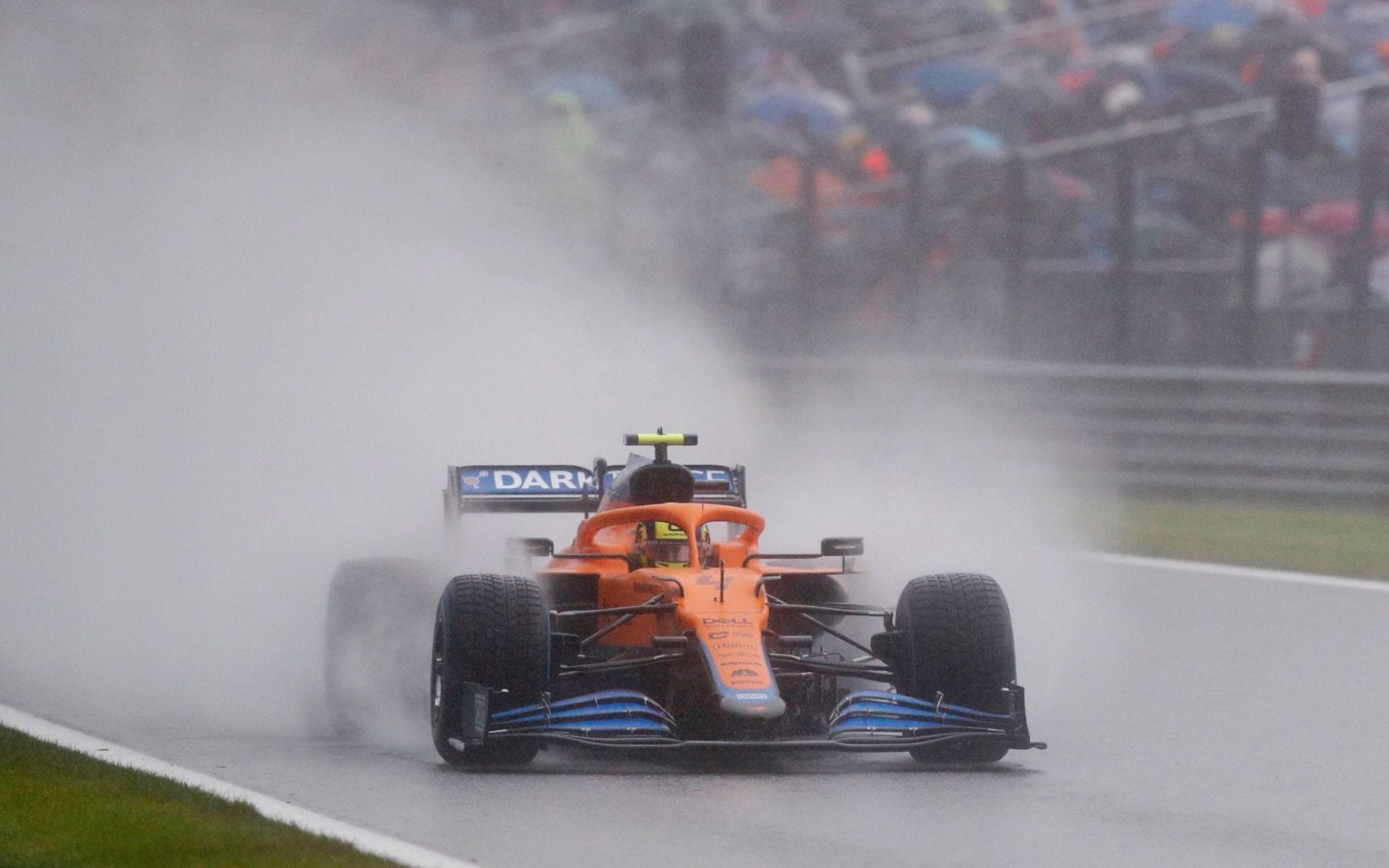