Following Manchester United qualifying for the UEFA Champions League Round of 16, we look back at the last time United won the trophy on a rain-swept night in Moscow, 2008, when a tense encounter between United and Chelsea ended in a 6-5 penalty shoot out win for the Red Devils, and ask, ‘Where is that Champions League-winning team now?

Van der Sar played a crucial part on that night in Moscow, making the save from Anelka’s penalty that helped Manchester United secure their third UEFA Champions League trophy.

He then worked in sports media as an analyst and pundit for Nederlandse Omroep Stichting, covering the 2011/12 season of the UEFA Champions League. In 2016, Van der Sar made a very brief comeback from retirement to play one game for his boyhood club, VV Noordwijk, and is currently the chief executive of his former club, AFC Ajax.

Wes Brown provided an assist for Ronaldo’s goal in the final. A product of United’s famed youth academy, he won 7 Premier League titles, 2 FA Cups, 3 League Cups, 2 Champions Leagues winners medals (one as an unused substitute in the treble-winning team of 1999), and 2 Community Shields in 361 appearances for the club. Brown spent three more seasons at Manchester United, before moving to Sunderland in July 2011, where he played for five years in the heart of the defence alongside another former United player, John O’Shea.

He later left Sunderland for Blackburn Rovers, where he played for one season, before moving to the Indian Super League side Kerala Blasters playing 13 times and scoring once.

During his time with Blackburn, he helped coach the U23 side. He has a UEFA A Coaching Licence and runs private coaching sessions around Manchester.

Nemanja Vidic is arguably one of the best defenders Manchester United has ever had, and his presence at the back in a pairing with Rio Ferdinand was the rock upon which much of United’s success was built. He was crucial for the Manchester United team in their 2008 Champions League final as he helped keep free-scoring Didier Drogba quiet for most of the game.

Vidic was a mainstay for United for six more seasons and became the captain of the club following Gary Neville’s retirement. Vidic won 5 Premier League titles, 1 Champions Leagues, 3 League Cups, 7 Community Shields, and a Club World Cup in 300 appearances for United. After Alex Ferguson’s stepped down as manager in 2013, Vidic left shortly after to join Serie A side Internazionale, and retired as a player in 2016. Vidic has revealed his ambition is to become a manager like Alex Ferguson and earned his UEFA Pro Licence badges in 2018.

He currently represents Man United in an ambassadorial role.

The 2008 UCL triumph was the highlight of a glittering career for the world-class defender who won 6 Premier League titles, 1 Champions League, 3 League Cups, 1 UEFA Super Cup, 4 Community Shields, and a Club World Cup in 455 appearances for the Red Devils.

He subsequently joined Queens Park Rangers in July 2014, but retired a year later, opting for a career as a football pundit. He is currently part of the analysis team at BT Sport.

Ferdinand had always been passionate about boxing and tried to pursue a professional career in the sport in 2018. However, the British Boxing Board of Control denied his professional boxing license, and he returned to punditry.

Patrice Evra was one of United’s greatest defenders in a trophy-laden era for the club. After the 2008 triumph, he stayed for six more seasons at United where he brought his total of honours to 5 Premier League titles, 3 League Cups, 1 Champions League, 4 Community Shields, and a Club World Cup in 379 appearances for the club.

The Frenchman then left to join Juventus, where he stayed for 3 years before joining Ligue 1 side Marseille. However, his contract with OM was terminated after a violent altercation with a fan before a Europa League match in November 2017 and which led to his contract being terminated.

In 2018, Evra Joined West Ham but made only five appearances, bidding farewell to professional football in 2019. In a quest for fitness to compete in Soccer Aid, he turned out for Middlesex County League Premier Division club, Brentham, in August 2020.

Patrice Evra is now in demand as a football pundit for various TV and radio channels and media outlets.

Owen Hargreaves was one of the penalty scorers in the shootout in Moscow, but after the 2008 final, his career in football was derailed because of a catalogue of injuries, making only five further appearances for the club. He left in 2010 with 3 Premier League titles and 1 Champions League in just 39 appearances.

Hargreaves later joined rivals Man City, in August 2011. However, he only played for one season, appearing in just four games because of yet more injury problems leading to him being released by the club. A move to QPR never materialised, and he was forced to retire from the game at 32 years old.

Owen Hargreaves is now a television pundit for BT Sport and CNN.

The man that brought it all together. Scholes was one of United’s most prominent and best-ever midfielders for club and country. Scholes played 5 more seasons for United after 2008 and finally retired in 2013 in Sir Alex’s final season as Man United boss. In all, he won 11 Premier League titles, 3 League Cups, 4 FA Cups, 2 Champions Leagues, 5 Community Shields and 1 FIFA Club World Cup in a career spanning 711 appearances.

He is now a football pundit featuring in ITV’s Champions League and England International matches coverage and on Sky Sports and BT Sport coverage of the Premier League. He also works at BT Sport alongside former United players, Ferdinand and Hargreaves.

Scholes is the co-owner of Salford City with several of his Class of 92 teammates and had a brief spell as manager at his beloved Oldham Athletic before resigning due to tensions with the owner after seven games.

One of the most underrated players from the Manchester United squad for the 2008 Champions League final. Carrick spent 10 more seasons with United before retiring in 2018 with 5 Premier League titles, 1 Champions League, 1 Europa League, 3 League Cups, 1 FA Cup, 1 Club World Cup, and 6 Community Shields in 464 appearances for the Red Devils.

Following Solskjaer’s sacking, Carrick has been appointed as Interim manager and led United to a 2-0 victory over Villareal on his managerial debut.

Tevez featured in a two-year loan spell with the Red Devils, where he made 99 appearances and won 2 Premier League titles, 1 Champions League, 1 Club World Cup, and 2 Community shields before making a controversial move across Manchester to join rivals, City, in 2009 which ended in acrimony after three years.

He then signed for Juventus in June 2013, before making a move to his boyhood club Boca Juniors in June 2015.

A year later, he moved to the Chinese Super League side Shanghai Shenhua, where he became the highest-paid footballer in the world but stayed for only one season.

In January 2018, he returned to Boca Juniors before being released.

The 37-year-old legendary goal scorer is now a free agent.

Following the triumph in Moscow, Rooney played for nine more seasons at Old Trafford before moving to his boyhood club Everton in 2017, chalking up 11 goals in 40 games.

In June 2018, Rooney joined MLS side DC United before returning to England to play for Derby County 2 years later.

In January 2021, he announced his retirement from playing, joining Philip Cocu’s staff as assistant manager at the club. He was appointed manager of Derby County following Cocu’s sacking and remains in that position today at a difficult time for the club due to several points deductions for financial irregularities.

Ronaldo is one of football’s all-time greats and a United legend. The Portuguese striker was on the scoresheet in the Champions League final against Chelsea with a towering back post header, but missed a penalty in the shootout.

After the final, his boyhood idols Real Madrid splashed out a world record £80m to secure his services as one of the Spanish side’s golden Galacticos. Cristiano Ronaldo spent nine seasons at Real Madrid where he chalked up a mammoth 15 trophies, including an unprecedented four champions league trophies.

In 2018, Ronaldo left Madrid for Juventus, becoming their top goal scorer in three seasons with the club.

In August 2021, he informed Juventus of his desire to leave for a new challenge. It was rumoured that both Manchester clubs were keen on signing him, but due to an intervention by his ‘father figure’ Alex Ferguson, United won the race for his signature for a fee of €25m.

He will hope to add to the 3 Premier League titles, 1 FA Cup, 2 League Cups, 1 Champions League and 2 Community Shields he gained in his first spell at Old Trafford. 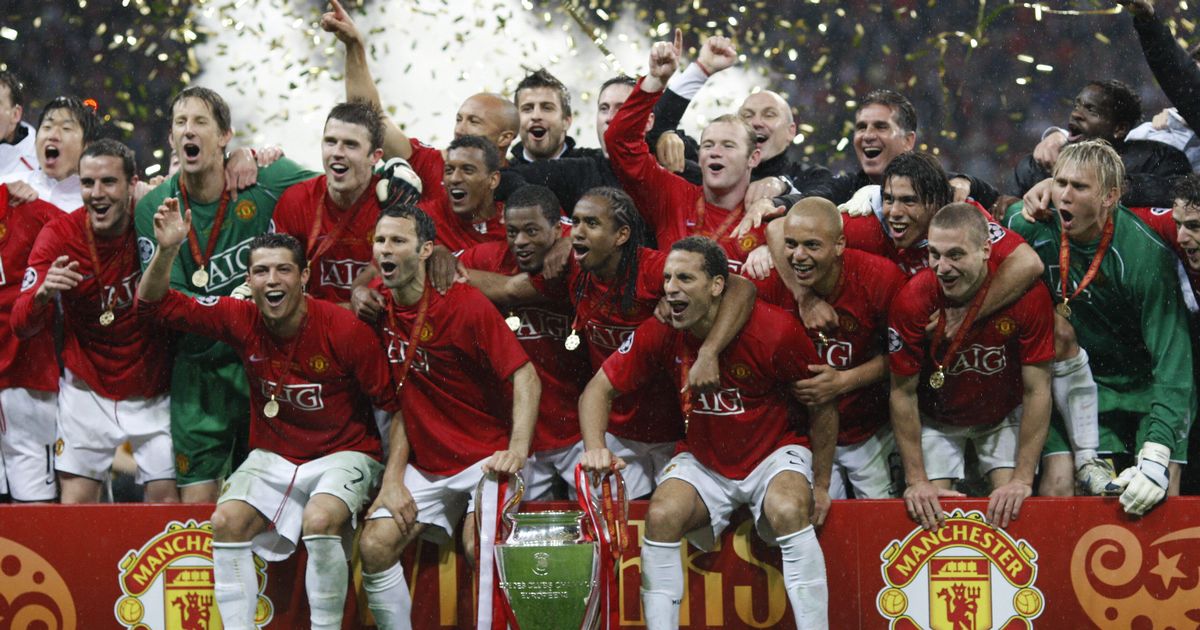