World – Davis Cup
Steve Darcis – Nick Kyrgios
Venue: Venue: Palais 12, Brussels, Belgium
Surface: Clay – Red Clay, Indoor
.
Well I find this incredible. Not only are the bookies overrating Kyrgios on clay but they’re underrating Darcis altogether. And at home? In the Davis Cup? If they were looking at stats, perhaps they would have been advised at starring at his win/loss ratio in Davis Cup, IN Belgium? Huh?
.
Now whether Kyrgios still has an injury is guess-work to me. To anyone really. The question is would Hewitt play Nick even if he was injured? With the fact Tomic is playing like a clown right now and not making the team and Kokkinakis is still far from full fitness, with Millman or Thompson the only fill-ins, the answer to that as far as I can see, would be yes. Fit or unfit, Kyrgios plays. He can still serve big.
.
Now it’s pretty common sense even to outsiders to tennis to know the worst surface to compete on when you have a niggling injury is clay. Kyrgios’ shoulder problem would not have disappeared entirely overnight and even if this problem has diminished you’ve got to believe the probability of it reoccurring when playing a best of 5 set match on the blood stuff is pretty high.
.
Darcis is no mug. Yes clay isn’t his best surface, but neither is it Kyrgios’. He knows his way around a clay court and his slice, variety and craftiness in the forecourt will mean Nick isn’t just going to be able to blow past him. His slice backhand can cause the ball to react oddly to bobbles on the dirt and the variation in pace between that slice and his topspin forehand will mean Nick won’t be able to settle into a rhythm easily without really focusing and putting in a shift physically. A real shift physically. To do that for three straight sets is not going to be easy for a guy that hasn’t stepped on a clay court in months. The quads will get worked and I for one don’t believe he’ll be able to maintain the intensity level required to win this in straight sets.
.
.
Steve has some inspiration to ride off with regard to the crowd and can shot-make at big-moments. He’s got nothing to lose and the fact Kyrgios is one to try and show-off with exhibition tennis will suit his own style of play. He loves the cat and mouse exchanges. I expect loads of drop-shots and lobs. I expect a catastrophe of stupid moments from Kyrgios. Yes Hewitt will have him focused, but wild animals can never entirely be tamed.
.
PS: Being indoors will also serve Darcis well, given that the ball is more aerodynamic inside and his serve and forehand will travel through the air much faster. Without any real weapons he needs that.
.
Bet: Over 33.5 games at 1.87 using 5 units (Minimum 1.5) 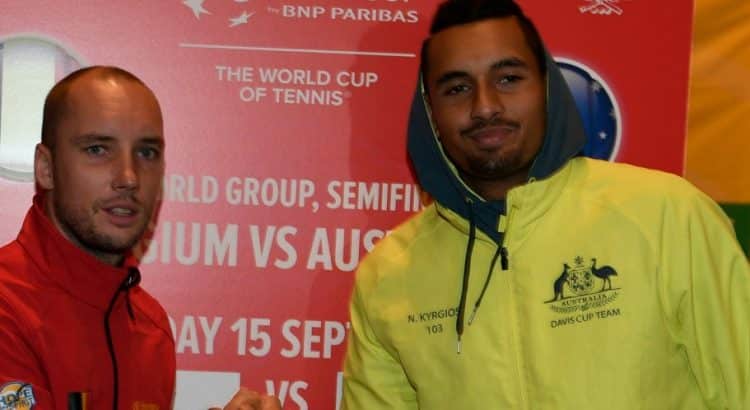