In the Semi final show-down at this Masters 1000 Series Event, hosted at one of Europe’s leading tourist resorts, Monte Carlo, Albert Ramos Viñolas of Spain and Lucas Pouille of France are set to square off in what should be a tactically intriguing encounter.

The crux of the match-up:

There are two or three distinct weaknesses Ramos Vinolas has in his game, which opponents with the right strengths and game plan can expose, even on clay

A pattern of play Ramos thrives on is this typical trick every lefty grinder has in their locker, of being able to consistently swing forehands with spin and angle into the right handers’ backhand. The idea is to spread the court and construct an opening, by dragging the opponent more and more out wide. They’re luring/forcing opponents into a cross court duel between their reliable lefty forehand and their opponent’s backhand.

The issue arises when these one dimensional lefties come up against right handers, who can flip the script on their shenanigans, by cleaning backhands up-the-line. Suddenly it’s a card-trick not quite so easy to pull off anymore and they become stuck and trapped in the match-up. They’re out of their comfort zone and unlike when facing opponents who don’t possess the skill of being able to reliably hit backhands up-the-line, are no longer able to impose their “winning game” on their opponents as much.

The backhand-up-the-line is a shot that Pouille more than has in his arsenal. When he’s able to find his range on it, he’s making that low percentage shot, to a high percentage level.

Lefties and Ramos’ dependancy on angles and how Pouille can target this:

Much of the way lefties both attack and defend involves them using angles. That is no different for Ramos. Trouble happens when they have no angle to work from, making it difficult for them to form one. As a result what they really don’t like is when players give them balls down the centre of the court, removing their angles to play with. They become jammed. Or rushed, as some would say.

Unfortunately for Ramos, when Pouille has time on his backhand, driving balls down-the-middle of the court, hard and flat is just another one of the young French star’s many effortless qualities. So if Ramos leaves Pouille too much time on that backhand wing, by dropping his “go-to lefty crosscourt forehand” too short” or “too narrow”, Ramos is getting burned. The Spaniard has little to no chance of keeping neutral in the rally. He won’t be able to defend/retrieve and so unable to wrestle himself back into rallies.

I’m sure this is what Pouille’s team will be encouraging him to do when he does have time on that shot. Or take it up the line. As it was part of what he did so well against a much better lefty, in Nadal.

Pouille’s occasional over reliance on his serve and how that factors on dirt vs Ramos:

Lefties are typically not very good returners, due to the nature of their grip, but on the clay that doesn’t prove as much of a factor. Flat serves struck with venom slow down after making contact with the surface and so players choose to go for the kicker (Topspin) serve.  As a result of this Ramos is able to take up a deeper return position, giving him time to whip balls back into court with his forehand.

Of course we know Pouille has a very good serve. It’s often a shot that gets him out of a lot of sticky situations. We’re talking 0-30s, 0-40s etc. With it not being as beneficial to him on clay as it would be on other surfaces, he’s going to be needing to grind a lot more to win points in his own service games. That will require him being more consistent with his intensity levels, something he can struggle with, along with a lot of the French guys. Maintaining intensity.

Saying that he does have a great deal of variety (Kicks and slices) which means he will be able to keep Ramos guessing.

Within the context of this match-up and the duels that likely take place from the back of the court, it’s clear to see that there are just too many areas of Pouille’s natural game that will easily trouble Ramos. He’ll take him out of his comfort zone and deprive him from being able to wrestle back a foothold in most rallies.

His double hander allows him to take backhands on early, up-the-line or hard and flat up-the-middle. Overall Ramos should become exposed as being a little one dimensional and unfortunately for him, in this context, a little bit of a one trick lefty pony. Ultimately a somewhat different, but poor man’s Nadal.

Trading (Hedging inplay) perspective: Early value on Pouille pre and during match at anything above 1.70, he’s likely to drop heavily once he wins the first set, leaving open for a nice exchange/hedge (Cashout/Trade)

Straight Result Betting perspective: 1.80 as a straight bet is hard to turn-down. Pouille statistically is fairly even-stevens with Ramos, but stats rarely ever cater for the real thing that matters. The way the players styles, strengths and weaknesses match-up relative to the court surface. 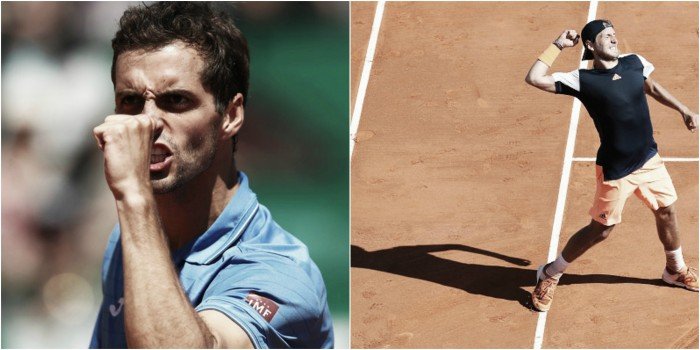