The drought to open the NASCAR season has ended for Jimmie Johnson and Hendrick Motorsports, winning the O’Reilly Auto Parts 500 at Texas Motor Speedway and beating out a late charging Kyle Larson. Logano began with the lead on the final restart after deciding to stay out on the final caution, not going with fresh rubber didnt help,as he wasnt able to hold off Johnson with fresh tires.

“I needed a 15-lap run instead of a 30-lap run,” Logano said. “Or a couple cautions in there and we would be standing in Victory Lane with a 12th-place car, and that would have been something.”

Jimmie Johnson received three IVs in the infield care center at Texas Motor Speedway on Sunday after his victory.

“When I caught Joey and was racing with Joey, I started cramping pretty good on my left side — my chest, and my bicep, my forearm,” Johnson said. “I knew I was real low on fluids.”

It was Johnson’s seventh victory at Texas, six in the last 10 races there.Johnson had to start at the back of the 40-car field because of a tire change after a spin in qualifying. He had qualified 24th.Joey Logano, polesitter Kevin Harvick and Dale Earnhardt Jr. rounded out the top five.

Ryan Blaney won the first two stages and gave Wood Brothers,its longest front-running car in a race in the past 35 years. Blaney finished 12th after leading 148 of 334 laps, the first time the team led more than 100 laps in a race since 1982.Blaney first got the lead on lap 16 with a crafty move around Kevin Harvick driving through turns 1 and 2.Blaney led 148 laps breaking the record for a Woods Brother driver,set by Neil Bonnett in 1982 at North Carolina Motor Speedway.

“It’s not where you want to finish,” Blaney said. “We deserved to finish third, at worst. Our car was at its worst point, a third-place car. You definitely think about that and are discouraged about that.”

The Monster Series starts backup two weeks from know,and gets back rolling at Bristol Motor Speedway 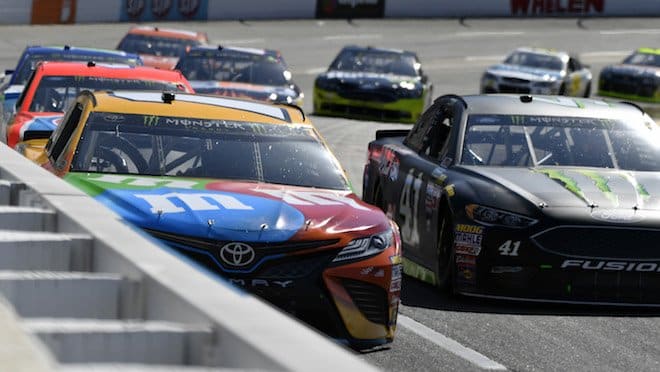