We are living in the golden era of tennis with Novak Djoković, Rafael Nadal, and Roger Federer dominating the ATP tour. Young talents like Alexander Zverev and Stefanos Tsitsipas are lurking, but it doesn’t like they have what it takes yet.

What about the youngest generation, and players who still haven’t turned 20? Let’s take a look at some of them that could become future Grand Slam champions, and find their place in the tennis history!

And remember, if you find a player you love, why wouldn’t you bet on his upcoming matches? First, check out Efirbet to read the most popular bookmaker reviews at the moment, and discover the best odds and bonuses for tennis betting.

Felix Auger-Alliasime is the most successful U20 player at the moment, and it is only a matter of time when he will enter the top 20 rankings. He already has nine wins at ATP Masters tournaments, as well as three competition finals. Unfortunately, Aliassime is still waiting on his first professional tennis title.

The player born in Montreal, Canada, is among those touted to compete for the number one spot once the Big Three retires. It is interesting to note that he was born on the same day as Roger Federer, can that be the sign that he is the next-gen tennis star we need?

If Alliassime is the next Federer, this guy could be the next Djoković. Kecmanović is the second youngest player in the top 100 rankings at the moment. He participated in Australian Open and Roland Garros and even defeated Denis Kudla in Paris.

Kecmanović was born in Belgrade in 1999, and his both parents are doctors. Despite that, he decided to pursue a sports career and started playing tennis when he was only six years old. It is interesting to note that Kecmanović’s nickname is Mischa, which is something he has in common with Mischa Zverev.

Alexei Popyrin was born in Australia, but both of his parents are Russian. During his life, he added Spain to the mixture. That is where Popyrin moved in 2010, and he still spends a lot of time there.

Popyrin has three victories at Grand Slam tournaments as he reached the third round of Australian Open and the second round of Roland Garros this year. He is incredibly tall, which makes the serve his biggest asset.

Alexander Zverev might be the most popular and successful German tennis player at the moment, but that could all change thanks to Rudolf Molleker.

The Ukrainian-born player still needs to get a win at Grand Slam tournaments, but two appearances are also a great success for a guy who is only 19 years old. Molleker loves US sports, such as the NBA, as well as Hollywood movies and TV shows, and musicians like Drake.

We saved the youngest one for last. Although the name wouldn’t suggest that Jannik Sinner comes from Italy. He was a great skier, too, but decided for a professional tennis career when he was 13 years old. Today, Sinner is still a teenager that hasn’t turned 18 yet, but he already has one victory at ATP Masters 1000 tournaments.

It won’t be a long time before he gets the chance to play in Grand Slams like his idol Roger Federer, but will he be able to win at least one? 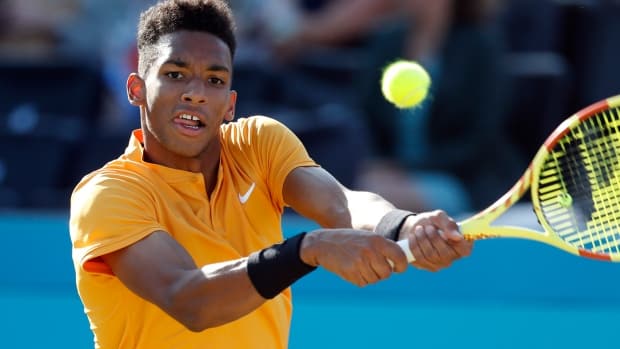