UFC 253 (scheduled for Saturday 26 September 2020) is set to headline the world middleweight championship bout between Israel “the Style Bender” Adesanya (19-0) and Paulo “Borrachinha” Costa (15-0).  After UFC 252 this month where Stipe Miocic successfully defended his heavyweight title against Daniel Cornier, Dana White in the post UFC 252 press conference predicted Adesanya v Costa will be the “fight of the year”.

A much-anticipated heated clash with both fighters expressing a genuine dislike for one another. The middleweight championship title is at stake for Adesanya along with one of these fighters may taste their first defeat in the octagon on Saturday 26 September 2020.

It is no secret that both fighters are pumped, riled up and ready to punch each other in the face. Israel Adesanya after unifying the middleweight championship against Robert Whittaker in UFC 243 back in October 2019,  called out Costa referring him to as  a “Ricky Martin wannabe” and an “overly inflated balloon animal”. He vowed to rearrange his face and said Costa will look like “Ricky Martin, botched”.  Costa has been constantly vocal on twitter referring to Adesanya as “skinny boy” and cannot wait to “punch him in the face”.

In terms of style, Adesanya is renowned for his body feints which lure his opponents in so he can execute his slick counter punches, coupled with his neat footwork allowing him to quickly move in and out of range.  His opponent, Costa loves taking an aggressive advance towards his opponent relying on his sheer and brutal power boasting 13 TKO victories in 15 fights. That is not to be said that Adesanya’s TKO record is below par, with an impressive 14 TKO victories in 19 fights. Adesanya also holds a kickboxing records of 80 fights, winning 75, 29 of those wins by way of knockout and a short boxing career with 5 wins in 6 fights. Adesanya’s extensive experience in combat sports is why his striking is advanced and is able to land clinical shots.

Both fighters in their last fights saw off the middleweight veteran, Yoel Romero in both controversial circumstances. Adesanya faced Romero in UFC 248 back in March 2020, a bizarre fight leaving fans very disappointed as both fighters rarely engaged. Although, it was likely that Adesanya’s constant leg kicks which chipped away at Romero won the fight in the eyes of the judges. Some fans however disagreed with the outcome.

Costa who attended the main event, told ESPN MMA that it was a “s**t fight” and Adesanya is “afraid to fight against powerful guys” [referring to Romero as one of the powerful guys].

Costa’s battle with Romero in UFC 241 back in August 2019 was the total opposite. It was two gladiators fighting with high intensity. Costa with his usual approach of advancing forward aggressively, applying pressure to Romero. This forced Romero to abandon his superior wrestling style to get into a brawl with Costa, with both landing devastating strikes. Both competitors showed great tenacity when hitting the canvas. The decision was up to the judges scorecard with Costa winning by way of unanimous decision. Again, a decision which some fans felt Romero was robbed of a victory.

Adesanya will be seen as the more skillful and technically superior to Costa. He will be relying on frustrating Costa, who will undoubtedly charge forward to apply pressure towards Adesanya. Adesanya will be looking to do what he does best; counter punching and setting traps to strike opponents effectively. Adesanya is taller and has a longer reach of 80″ in comparison to Costa’s reach of 72″. Adesanya’s superior reach may be pivotal for him to maintain the range in the fight and keep Costa within a comfortable range. If Adesanya is within his range, he will be able to land his powerful question mark kick,

On the other hand, Costa, much like the Juggernaut from X-men of the UFC middleweight division, will be advancing forward to pressure Adesanya and to throw his thunderous strikes. The key thing for Costa is to get well within range to land those explosive punches and kicks. This will be the key to see who will come out on top. If Adesanya fails to keep Costa within a comfortable range, he may be caught with Costa’s haymakers which could end the fight in a flash.

Costa does have the tendency to kick below the belt as witnessed against Romero and against Uriel Hall in UFC 226 back in July 2018. Many believe Hall had never recovered from the low blow which lead to Costa’s TKO win over him in the second round. This may be something Adesanya will have to take into consideration.

Fight of the year?

With all the technical ability Adesanya possesses and the power and force that is Costa, this fight has the ingredients to indeed be the fight of the year, considering the hatred both fighters have for each other. With the middleweight title on the line and somebody 0 has got to go, both fighters will do whatever it takes to secure victory and bragging rights after all the back and forth insults thrown at each other over the years. UFC 253 will hopefully prove whether Adesanya rules the middleweight division or whether Adesanya will have to move over for a new king of the division. 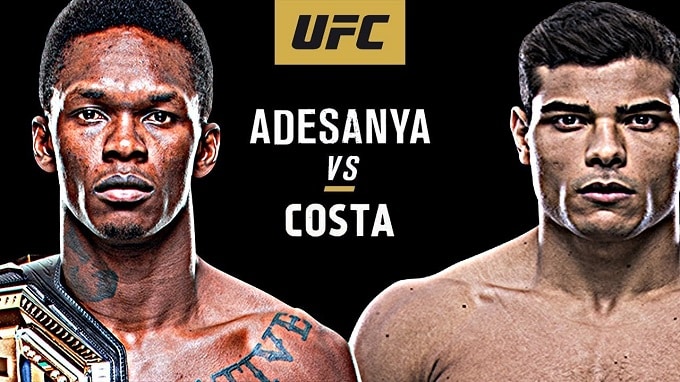