Everyone knew the Stanford quarterback was a can’t-miss prospect coming out of college. He helped turn around a sub-par program, propelled his head coach into the NFL, and had all the mechanics and measurables to be a great quarterback at the next level.

But did anyone expect him to be this good, this soon?

Some analysts even debated taking Robert Griffin III over Luck in the 2012 NFL Draft. Griffin has turned out to be a quarterback that looks lost on the field. He’s more fragile than your grandmother’s favorite set of fine china and continues to put his head coaches on the hot seat. Each and every one of his backups has looked better than him at given times. Kirk Cousins came up just short in a shoot-out against one of the leagues most potent offenses in the Philadelphia Eagles, while Colt McCoy knocked off the mighty Dallas Cowboys in Arlington on prime-time television.

On the other hand, Luck has won 11 games in each of his first 3 seasons. He continues to impress football fanatics everywhere with his toughness, skill, and late-game heroics. Watching a quarterback pick apart a defense while still being able to plow someone over on a goal line QB run is something spectacular.

It almost seems unfair for a quarterback to be so mobile yet so deadly with their arm.

Luck possesses a special skill set that is unprecedented. He has size and pocket-presence, while still being quick on his feet and making big-plays. In pressure situations, he’s cool, calm, and collected.

In the 2013 playoffs, Luck and his Colts etched themselves into the history books with the 2nd largest comeback in NFL history, overcoming a 28 point deficit against the Kansas City Chiefs. In this game the Stanford-product exhibited all of the traits that make him so special mental toughness to overcome such a deficit on the biggest stage; physical toughness when he recovered a fumble and punched it in himself on the goal line; pinpoint passing on his 64-yard touchdown to T.Y. Hilton; and obvious late-game heroics when he willed his team to victory over a stout defense.

This season, the Colts suffered huge injuries from key offensive and defensive players Ahmad Bradshaw and Robert Mathis, respectively. With a below-average defense and non-existent run game, Luck felt more weight on his shoulders than ever. After expectedly beating the Cincinnati Choke-Artists in the Wild Card round, the Colts went into Denver, where they hadn’t lost all season, and knocked off the heavily favored Broncos. Not only did this game send the Colts to the AFC championship, but also it was a symbolic torch-passing from Manning to Luck. It had to sting for Peyton to lose to the team that jettisoned him and the quarterback with which they replaced him. Luck purely outplayed Manning, as his top running back Daniel Herron had just 63 yards on 23 rushes, resulting in a 2.7 YPC.

With just 3 years under his belt, Luck’s resume includes a great win percentage and a myriad of comebacks. He goes into Foxborough this weekend to butt-heads with Tom Brady and the red-hot New England Patriots. Knocking off the most prestigious team in the last decade, and potentially winning a Super Bowl Ring, could solidify Luck as an elite NFL quarterback- if leading the league in touchdowns and putting up gaudy yardage totals at age 25 wasn’t enough for you. 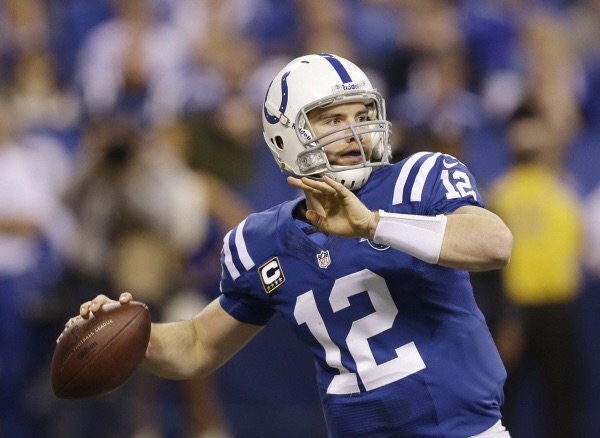