Top seed Rafa Nadal defeated compatriot Pablo Carreno Busta 6-3, 6-2 to reach his 12th Barcelona Open final, in what appeared to be, but was far from, a routine win. He will play no. 2 seed Stefanos Tsitsipas, the Monte-Carlo Masters 1000 champion, who earlier beat Italian teenager, Jannik Sinner, in straight sets, 6-3, 6-3, to reach his second tournament final in a row and his second Barcelona Open final.

World no. 3 Nadal, playing on the court named after him, was the hot favourite, having never lost to his fellow Spaniard in seven matches. The 34-year-old showed his intent early on, in front of a 1,000 crowd basking in the sunshine, ruthlessly targeting 29-year-old Carreno Busta’s backhand side with his trademark power forehand. He broke Carreno Busta in his first service game, and then again in his third, to dash into a 5-1 lead in just 26 mins.

He seemed to be cruising to a first set win when at 15-15 and serving for the set, the bizarre happened. A lovely backhand down the line from Nadal forced Carreno Busta to launch a high defensive shot into the air. It should have been a routine overhead smash away, but Nadal, perhaps blinded by the sunshine, inexplicably, almost completely missed it, playing an air shot, and looked on in bemusement as the ball landed right next to his feet, to stunned gasps from the crowd.

The 20-time joint-record Grand Slam winner, perhaps unsurprisingly, appeared rattled by his bewildering miss. Carreno Busta, sensing his rival might be human after all, got an injection of confidence and hit a big forehand winner down the line to set up two break-points, something which would have been deemed unthinkable just moments earlier. Nadal subsequently double-faulted, and suddenly, out of nowhere, Carreno Busta had a break of serve, and the excitement level was ramped up.

Fortunately, Nadal had the safety net of a second break and he served for the set again at 5-3. However, buoyed by his unexpected breaking of the Nadal serve, and some nervy play from the 11-time champion, Carreno Busta was starting to look threatening. Nadal has had trouble serving out sets and matches in the past, and it looked like history might be repeating itself. Several uncharacteristic forehand errors from Nadal gave Carreno Busta another break point chance.

He sensed his opportunity and boldly went for a big backhand cross-court winner, but put it agonisingly into the net. A welcome reprieve for Nadal, but a poor drop shot attempt on the next point saw him face a second break point. Rafa Nadal though is not a 20-time Grand Slam champion for nothing. Facing a second service break in a row in a match he had been cruising in, he produced his two biggest serves, 220 kph and 199 kph down the middle arrows, to create a set point.

At this stage, most people would have expected Nadal to win out, but the game had another twist in store. A weak second serve and a missed backhand down the line gave Carreno Busta a third break point opportunity. Could he take advantage this time? Once more, Rafa showed the genius great champions are made of. Under intense pressure, he delivered a classic wide leftie outswinger serve that would have made England’s seam bowler, Jimmy Anderson, proud, to Carreno Busta’s backhand on the ad side that left him floundering to hit a weak return, which Nadal put away to save the break point. A failed return of serve on the following point meant Nadal now had his second set point. This time there was no mistake in the rally, and Nadal had finally taken the set in 46 minutes.

Carreno Busta tried to up the ante in the opening game of the second set by serving bigger and going for more risky winners, but the tactic didn’t work and Nadal soon had two break points. He converted at the first attempt with a well-anticipated forehand cross-court pass that flew past a falling Carreno Busta at the net.

Nadal had his foot on the accelerator now and wasn’t in the mood to let go this time. Carreno Busta, whose first-serve percentage had now plunged from 96% to 52%, found himself two break points down again in his next game. He fought back admirably, playing one of the best shots of the match, an exquisitely angled backhand crosscourt winner that just skimmed the top of the net, to save the first, followed by a couple of Nadal errors which gave him game point.

Nadal though wasn’t about to let his advantage slip and a good defensive cross court shot was followed by a brilliant rally, which ended with an excellent trademark backhand winner from Nadal, and he had his second, more hard-won, break to make it 4-0.

Soon, Nadal was serving for the match at 5-2. Surely, history couldn’t repeat itself again, could it? A good return of serve and bold attack on both wings by Carreno Busta put Nadal on the defensive to make the score 15-30. A few ripples of encouragement emanated from the home crowd who obviously wanted to see more tennis. If the Rafa half were getting a little nervous again, he soon put their palpitations to rest with his go-to wide serve out on the ad court to Carreno Busta’s backhand to make it 30-30.

But more mini-drama ensued when a good return of serve down the line from Carreno Busta was called out but overruled by the umpire and the players had to replay the point. A second serve ace wide on that same ad court side gave Nadal match point. Nadal thought he had hit another ace but was overruled by the umpire. A weak second serve of only 133 kph was given the treatment it deserved as Carreno Busta had the time to run around his backhand and swat away a forehand crosscourt winner. Nadal then switched to a serve down the line to give him another match point. Yet another wide leftie serve to the ad side did the trick as Carreno Busta’s attempted pass down the line drifted just out.

Nadal had won by a regulation 6-3, 6-2 scoreline, but it had been a deceptively tricky match and generated some good entertainment for the home crowd.

In the earlier semi-final, no. 2 seed Stefanos Tsitsipas won against teen sensation Jannik Sinner in straight sets, saving four break points along the way. In a tepid match that never caught fire, neither player was at their best, but Tsitsipas’s superiority on serve and aggressive approach ultimately won out. In contrast, the 19-year-old no. 11 seed Sinner, the youngest semi-finalist since Rafa Nadal in 2005, struggled to produce first serves, and when he did, their mid-pace level wasn’t enough to push Tsitsipas back behind the baseline and made it impossible for him to get a foothold in the rallies.

After a double fault from Sinner at the start of his opening service game that was illustrative of his serving difficulties to come, Tsitsipas went on the attack early to earn two break points. Sinner though has demonstrated calmness and resilience in his nascent career which should serve him well. He finally landed a first serve of 186 kph when it mattered, and a Tsitsipas error made it deuce. Another huge first serve, this time a whopping 198 kph, was followed by a big forehand to give him an advantage in the rally, and it was two break points saved.

A couple of holds later and it was Tsitsipas’s turn to face two break points. A lovely deep volley winner to the corner saved the first, and he was let off the hook when an uncharacteristically weak 137 kph second serve from him was so slow that Sinner couldn’t get a proper hit on it, to make it deuce. Then came a peculiar incident where the racquet flew out of Tsitsipas’s hand on the follow-through after his serve, but he still had time to move forward and pick it up, ready to hit the return. Luckily for him, Sinner’s return was out so he didn’t need to bother. A backhand winner down the line followed, and he had also held.

Although Sinner would save another break point in his next service game, it seemed only a matter of time before Tsitsipas broke. Three forehand errors from the Italian in the following service game meant three more break points to Tsitsipas. A forehand return of serve by Tsitsipas to the backline that just missed by a whisker and a forehand mis-hit during a rally got the score to 30-40, but Sinner’s serving woes meant he chose a weak low-risk 135 kph first serve, which put Tsitsipas on the attack, leading to another error, and finally he had broken serve. As if to underline his dominance on serve, Tsitsipas hit his biggest serve of 223 kph en route to holding serve and winning the set 6-3 in 42 minutes.

Sinner couldn’t buy a first serve in the opening game of the second set but Tsitsipas was unable to take advantage. Sinner tried to raise his level as he started to hit through the ball a little more to earn a third break point in the fourth game. Tsitsipas, who has been known to lose concentration occasionally when ahead, kept his focus and dug deep. A couple of big first serves and it was game point to him, but an unforced forehand error and an excellent return of serve straight back to his opponent, meant Sinner had a second chance. Again, Tsitsipas’s serve came to his rescue – a good first serve that caught the line was followed by a 223 kph bomb – and yet another good serve to follow meant he was able to be aggressive and come forward to put away an easy high volley to win the game.

Tsitsipas’s hold showed the value of a big, reliable first serve and it seemed to knock the fight out of Sinner. As it often happens, after having had two break points, he swiftly found himself facing three break points at 0-40. Again Sinner showed his mettle, and some cleverness, as he drew Tsitsipas in with a lovely drop shot before lobbing perfectly over the 6 ft 4 inch Greek to save the first.

A crucial first serve of 182 kph out wide just when it mattered lead to a forehand winner and the second break point was saved. Another first serve of 187 kph this time, was unleashed, but Tsitsipas was able to get a good racquet onto it and Sinner could only dump a forehand into the net. Tsitsipas had his break to go 3-2 ahead.

From there on, Tsitsipas was the only likely winner, and he broke Sinner again at 5-3 to cruise to victory, winning 6-3, 6-3 in 1 hour and 23 minutes. Tsitsipas’s serve dominance is underlined by the fact that he has won 17 sets in a row. He is now tied with Andrey Rublev for the most wins in 2021 at 26 matches.

The final between the two top seeds will be a repeat of 2018 final, which was Tsitsipas’s first ATP final, and which Nadal won easily in straight sets 6-2, 6-1. Rafa Nadal will be going for a 12th Barcelona title, to try and make it his second most successful tournament after Roland Garros, where he has won an incredible 13 French Opens. Tsitsipas, on the other hand, will be chasing his first ATP 500 title to follow from his first ATP 1000 Masters win last week in Monte-Carlo.

The last time these two players met was at the Australian Open when Tsitsipas made a dramatic comeback from two sets down to win in a five-set thriller. Tsitsipas will be wishing for history to repeat itself, while Nadal will be hoping for the historic with a 12th win on the court named after himself. 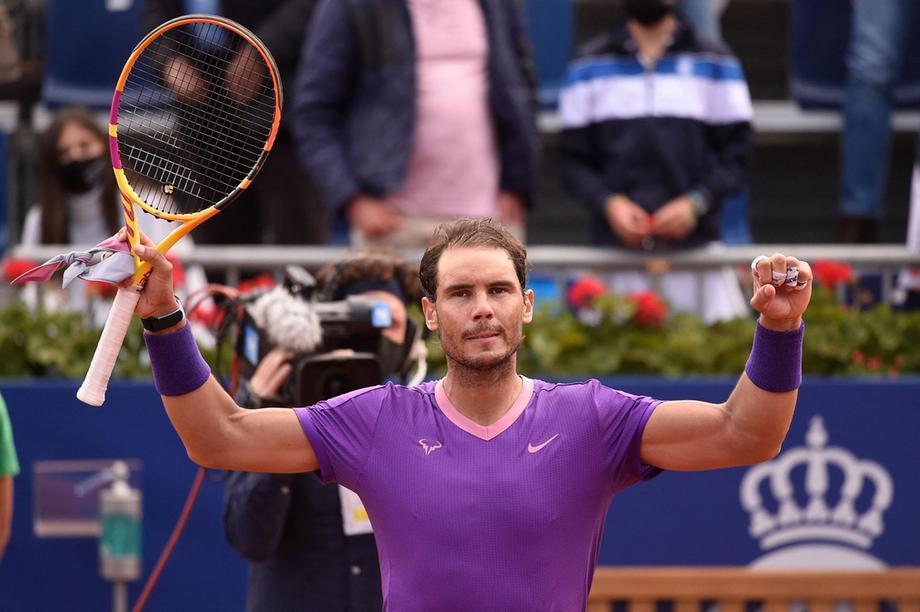