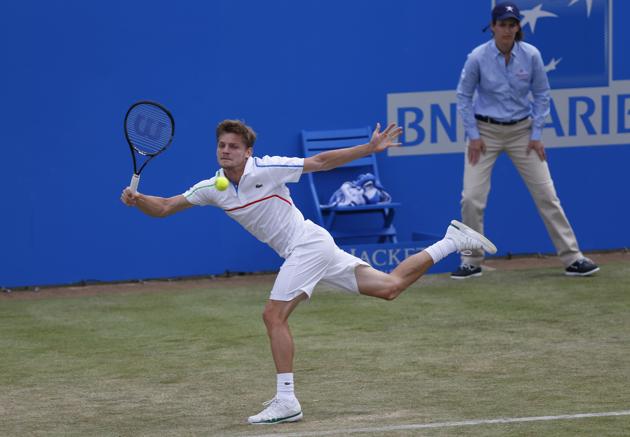 Giles Simon season veteran of 30, takes on the #15 ranked up and coming Belgian star David Goffin.

Simon hasn’t played any matches on grass this season and with grass being a surface which technically takes a few matches to get adjusted to, both in terms of footwork and timing, this match really is going to be difficult for the French man.

Simon is an out-and-out counter-puncher. Where-as Goffin is a more versatile player, whose ability allows him to counter a lot of attacks that come at him. He can do much of what Simon does in-terms of defensive, plus more. An aggressive counter-puncher I guess you could say. He has an all court game, much like many of the complete Belgian players of the present & past eras. Xavier Mallisse, Oliver Rochus, Christopher Rochus, Steve Darcis to name a few. He like many of them possesses great touch and feel, not forgetting great awareness and understanding in the forecourt. These assets are always a bonus on a surface like grass and reason why many of the Belgians have such easy success on the surface.

On grass the ball reacts by skidding off the surface and staying relatively low. Both Goffin and Simon like this lower bounce, as it means they find it much easier absorbing/redirecting the power their opponent hits at them with. The height of the ball’s bounce is also typically where they prefer and are comfortable to striking the ball from, around waist height, in-particular on the backhand. On-top of this the skid and low bounce helps their attacking strokes flourish more, as it speeds them up, say compared to a slow surface like clay for instance which is a bit more hard to penetrate. The biggest difference on a faster surface like grass for these pair is their second serves. Their second serves are a lot less attackable given the court’s quickness and as a result they find it easier going holding onto their own serve.

The match-up:
In-terms of a match-up between the pair, you’ve got to feel Goffin will be the one who looks to be the more pro-active in rallies. Goffin has such great preparation with his feet around the ball when gearing for his forehand and it means he is able to afford himself loads of time on the ball, this paves himself way for a cleaner more aggressive strike, even on a grass court. He’ll look to maximise this time he gets on his forehand Goffin, by working the full width and extremities of the court, eventually causing the Frenchman to lose his court position. Matters become even worse for Simon when you consider he won’t be able to defend and counter the attacks at him as he normally does on a hard court, his favourite surface. This is because of the slippery nature the grass provides. Grass requires very precise patterns of footwork. I feel Simon will be needing to take early guesses a lot often for where Goffin is going whenever he is on the back-foot and defending.

Goffin gains more of an edge in the rally/point off his serve than compared to Simon on his serve. Although not the fastest or heaviest serve around, it is one the best placed and accurate. Goffin manages to finds some nice angles with it and uses it to manufactures opportunities for easy one two punch combinations. Its variety is great, especially from the deuce court. An effortless service motion and that means he tends to be able to produce on it at big moments in matches. additionally has the better serve, the more effortless serve. Simon doesn’t have a bad serve by any means but its a lot more predictable and less productive at big moments.

Another aspect that will factor is Simon’s dependency on defence and counter-attacking. Goffin is not an easy guy to move around and draw an error from. Typically it requires good placement and power and Simon doesn’t have much easy power within his natural game. Once he (Simon) realises he has to play with placement and power, he will be attempting to play completely out of his comfort zone and forced into trying to take the initiative more in his own service games.

Surface warm:
The biggest difference between the two today will be how warm they both are to the surface. Goffin has just come from playing a bunch of matches in the recent grass 250 event held in Holland. He missed out on the title there losing to Nicolas Mahut in the final, but none-the-less given the wins will swing into this one with bags of confidence and momentum.

Simon on the other hand is playing his first match on grass since last year’s Wimbledon and will definitely take some take some time adjusting to the pace of the surface, the lower bounce, etc. His footwork & timing will not be in tune with the surface straight away. He has little rhythm relative to the surface.

Summary:
In summary we have two great movers and absorbers of pace, but crucially Goffin the one who has the greater/more fire power to work with. The more ability to work the point on the front-foot and the one possessing the more all court game.  Simon struggles when needing to take the initiative in the rally/point and that will be what he is going to need to do once it hits him he is not guaranteed to win most of these points on serve when duelling with the silky Belgian from the back-of-the-court.

The ball absorber to go down quite comprehensively. Goffin in straight sets. 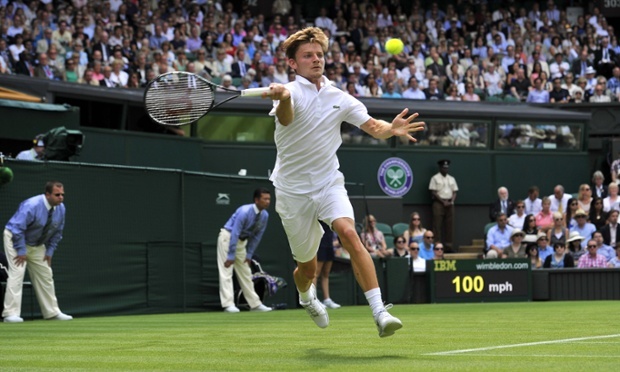