Mack had previously missed the two most recent games prior to the Bears’ bye week due to the foot injury, but he had not been placed on the injured reserve until now, thus taking up a roster spot despite not playing in any games. Following the news of his surgery Mack has now been placed on the IR list.

The six-time Pro Bowler suffered the injury in a Week 3 loss in Cleveland. Mack played in the Bears’ next four games—recording three sacks—despite being either limited or held out of practice entirely. He then sat out back-to-back contests against the 49ers and Steelers heading into the bye week.

The team hoped the bye week would help heal Mack’s foot, but the former NFL Defensive Player of the Year missed practice Wednesday and Thursday.

“With him, it’s been the last several weeks just trying to get right,” said coach Matt Nagy. “I think we did everything as far as trying to attack it the right way with him, and I know he’s put a lot of time and energy in trying to get back and see where things are at. But this is where we’re at.

“I know he’s frustrated because he’s such a competitor. But this is the best thing for him and the best situation to be able to help him out and get it fixed.”

The news comes as a major blow to the Bears, as Mack has been very productive for them this year. Even having missed two games, the 8-year veteran is still in the top 15 in the league with 6 sacks. His 6.0 sacks in the first six contests were the most in his eight-year NFL career in the first six games of a season. He finishes the season with 19 tackles, 7 quarterback hits and 9 pressures.

Mack will join another veteran linebacker on injured reserve in ﻿Danny Trevathan﻿, who was placed on IR Friday. After missing the first four games this season with a knee injury, the 10-year veteran appeared in the last five contests, registering 19 tackles. Because Trevathan was already activated from injured reserve once this year, he’s ineligible to play the rest of the season.

With Mack now out for the year, the Bears now roll with Robert Quinn and Trevis Gipson starting at the edge rusher position. Quinn is 12th in the league with 6.5 sacks, but with Mack injured, he could end up having more attention directed his way when rushing the passer.

It’s hard for him [Mack],” outside linebackers coach Bill Shuey said Monday. “I talked to him [Monday] morning, and he’s in meetings and stuff. He’s definitely anxious to get back. This is hard for him. He loves to compete, and this is hard — especially the last two games that he’s missed, we haven’t won those. He always feels that there’s something he coulda done to help.”

The Bears likely will also be without receiver ﻿Allen Robinson II﻿, who is listed as doubtful on the injury report. Robinson hurt his hamstring in the Bears’ last game, Nov. 8 against the Steelers, while making a key 39-yard catch on a late go-ahead touchdown drive. He was unable to practice all week as well.

Prior to this season, Mack had never played fewer than 14 games in a season. That mark came in Mack’s first campaign with the Bears back in 2018.

The Chicago Bears will take on the Baltimore Ravens in Week 11. 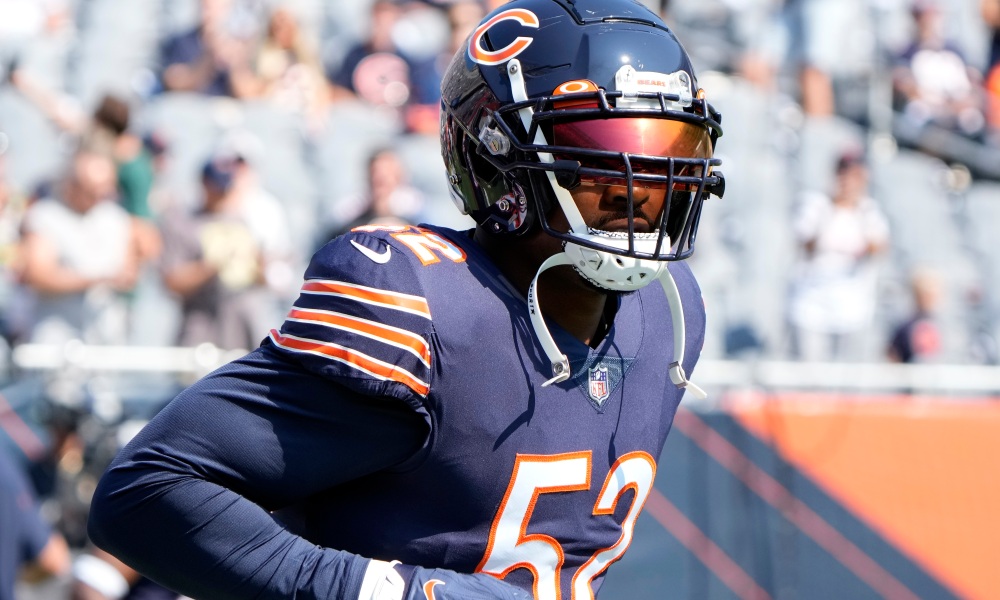