Every time he gets the ball I instinctively lean towards the TV screen, fizzing with anticipation because I know that this run could be the run.

For Chubb, of course, the run comes in many different forms: he could bounce outside, beat the defenders to the edge with an amazing display of speed and streak down the sideline untouched; he could squeeze between two converging defensive linemen, stiff-arm a linebacker and fall forwards beyond the line-to-gain for a crucial first down; he could find himself crashing into the secondary, lowering his shoulder pads and, like a runaway freight train, plough straight through an unfortunate, doomed, defensive back. He can do it all.

The thing is, he’s not the only one who can do it all.

The other thing is, Chubb isn’t the only one on his team who can do it all.

The above paragraph would be equally accurate if I were describing Kareem Hunt too. Or Ezekiel Elliott. Or Dalvin Cook. There are running backs all around the league who excel in all facets of running back play. It wasn’t that long ago that NFL backfields consisted of a whole cast of different backs, each one specialising in just one facet of the run game. You had a between-the-tackles battering ram, a super-fast guy, a shifty third-down pass catcher. There are exceptions to every rule, and I am generalising to a degree, but the emergence of these “complete” running backs marks a distinct phase in the evolution of the NFL backfield. What’s more, teams are employing two of these complete backs and having great success.

I believe that this success is the result of the NFL “arms race” — the back and forth pendulum swings of competition between offence and defence. Just as in the animal kingdom, predator and prey are locked in an oscillating cycle of innovation and adaptation. This same cycle of innovation and adaptation can be seen over time in the NFL. A team has success, and the other thirty-one teams attempt to limit that success or copy what Team A does in an attempt to emulate that success.

In such a competitive league even a small change or adaptation can create a big advantage. Teams are constantly looking to implement any modification to gain an advantage, be it schemes, formations, play-calling style or roster philosophies. In 2021, teams that deploy two complete backs are some of the most effective rushing teams. What I am calling the Duo Backfield is simply the next swing of the pendulum in favour of offence. I want to explore in more detail what led to this new phase of roster management, offensive philosophy and play-calling, and appreciate these amazing athletes while we can, before the pendulum inevitably swings the other way.

ALSO READ:  LA Rams Robert Woods Out For Remainder Of The Season
Embed from Getty Images

We constantly hear that the NFL is a “matchup” league, meaning that if you can beat the player opposite you one-on-one, you give your team a greater chance of success on that play. A wide receiver who breaks the ankles of the opposing cornerback and gets open downfield, or the defensive lineman who effortlessly brushes past an opposing guard and goes on to sack the quarterback, or, indeed, a 100kg running back with blazing speed bursting through the defensive line and running through defensive backs in the second level all create matchup nightmares for the opposition. Running backs like Chubb and Elliott create favourable matchups because they are so versatile. On any given play they have the ability to run between the tackles, run off-tackle, outrun defenders, run through defenders, pass protect, or run routes and catch passes. No defender is versatile enough to cover one-on-one in all these situations. Linebackers will struggle to cover one-on-one because these backs have too much speed, and defensive backs will struggle to cover as these backs are too strong and can overpower them. It is hard enough covering one of these guys, but what is any defence supposed to do when you have two of them? Let alone two on the field at the same time.

Defensive coordinators have a few tricks up their sleeves to slow down opponents and limit what they do well, but it may have been defensive schemes that enabled the emergence of these backs in the first place.

There is a basic and undeniable conundrum that underpins all defensive schemes in football: a defence has limited resources. How a defence deploys those resources affects how effective they are at stopping the opposing offence from gaining yards in certain ways. In very simple terms: if a defence commits 100% of its resources on a given play to stop the run, the offence will find it difficult to run the ball, but easy to pass; likewise, if a defence commits 100% of its resources to stop the pass, the offence will find it hard to complete a pass, but very easy to run the ball. So, naturally, on each play defences strike some balance between stopping both the pass and the run, and must accept a degree of vulnerability to both the pass and the run. Over the long history of the NFL, there has been a general trend towards offences relying less on the running game and more on the passing game. This trend has accelerated and become especially apparent since the turn of the millennium. Teams pass now more than ever, and it shows in both offensive and defensive schemes.

NFL offences employ more Wide Receivers on more plays than they used to, it is now common to see teams use three or four WRs on the field at the same time, on a majority of offensive snaps. Likewise, the Tight End position has morphed from a primarily blocking role into a primarily pass-catching role, to such an extent where players like George Kittle or Travis Kelce are among the top receivers in the league. Defences have responded to the increase in pass plays too, they employ more defensive backs on more plays. No more are we debating the merits of the 3-4 against the 4-3 defence, no one has that many linebackers on the field anymore. Nickel (five DBs, two LBs) is the new base formation, with Dime (six DBs, 1 LB) packages being used ever more frequently in direct response to the overt passing threat from offences. As defences focus more and more on stopping the pass, committing a greater proportion of their resources to it, they have opened the door for the running game to make a resurgence.

Another Oft-bandied phrase is that the NFL is a “copycat” league, meaning as soon as one team has success with something, a whole bunch of copycats try to do that same thing in an attempt to emulate that success. We are now seeing the copycats emerging, trying to emulate the Duo Backfield and achieve some of that same success. A graphic illustration of to what extent teams are copying each other is the size of running backs in the NFL:

Cleveland, Dallas, Minnesota and New Orleans, four teams who each employ this Duo Backfield, all have backs of very similar size, all within a few centimetres and a few kilograms of one another. There are a surprising number of running backs around the league who fit within this narrow range, showing that teams recognize a back of this size is going to be effective in the age of the mismatch.

In light of recent injuries to backs like Derrick Henry and Saquon Barkley, who their teams rely on heavily, the importance of having a second back has been further highlighted. These teams would feel so much better about their chances of winning games while their stars were out if they had a legitimate 1A running back option on the roster. Having a second back already in the system and ready to step up can keep the run game ticking along, can reduce the chance of injury to the star back in the first place by spreading the workload, and eliminates the need for teams to sign new players and push them into the action faster than is ideal.

Some football adages never go out of style. “Take what the defence gives you” is as accurate now as it ever was, and offences are doing just that, using the explosion in passing offence and the natural defensive reaction to it, to gain an advantage on the ground. Utilising two big backs is simply the best way to attack a defence set up to stop the pass.

I love watching Nick Chubb run. I know in my head that the race is already on to counteract these complete backs and Duo Backfields, but in my heart, I hope teams haven’t figured it out just yet. 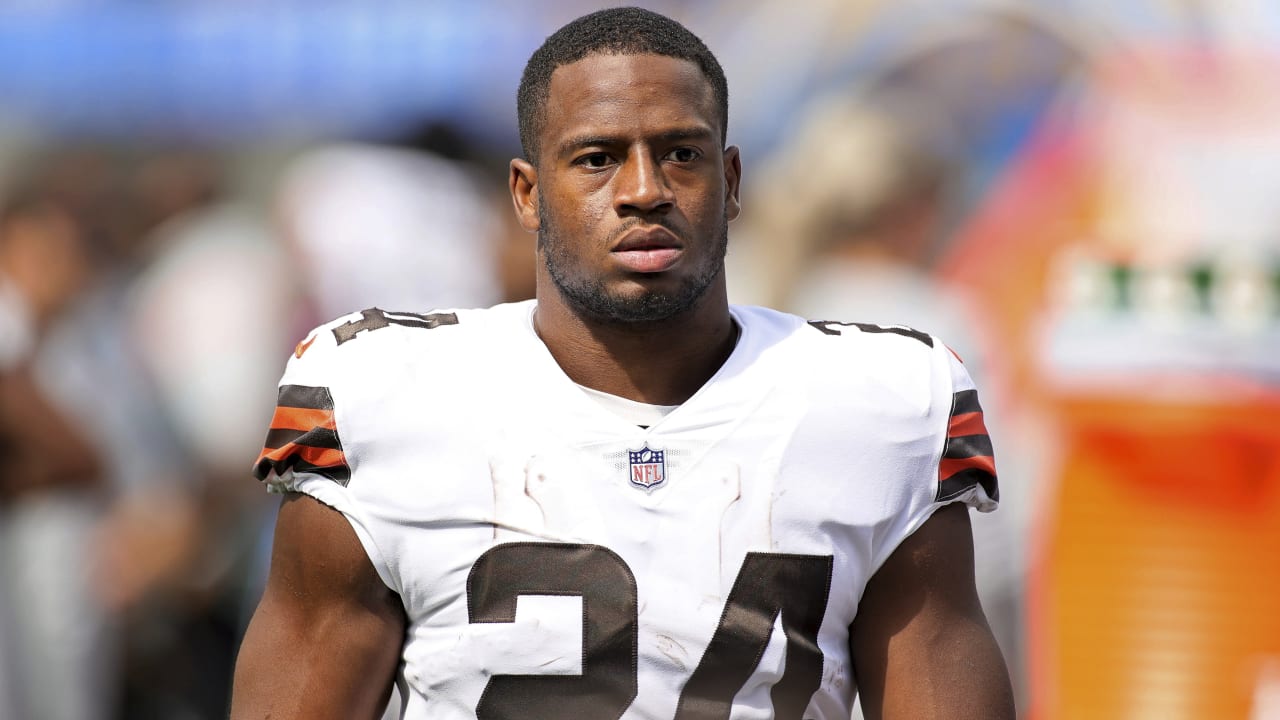