Bangladesh have shown England how to perform on the big stage. Bangladeshi fans do not have much to cheer about usually but they certainly do now. England were convincingly beaten and are now set to be boarded on a flight back to the London.

Bangladesh showed courage and heart in a game which England desperately needed to win. 10-2 but they still continued to fight the Bengal Tigers did not succumb to the initial pressure from the England seamers and showed the world that they are here to win not just participate.

Millions around the world watched a heroic moment when James Anderson heard the stumps rattle behind him and a loud cheer go up around the world as Bangladesh triumphed on the biggest stage of them all.

A sport adored by billions which was first played in England, but now is dominated by India the question to be asked is are England the reason for such love for cricket after all they did rule over Indian soil for more than 200 years.  England have never won a major tournament in ODI cricket yet they seem to reassure themselves that they are doing well.

Is cricket really about rankings? England may be ranked within the top 5 in ODI’s, yet when it comes to World Cups they fall flat. In 1992 they were bedazzled by the swing of Wasim Akram who changed the game in just one over. That was probably the closest England have ever come to winning a World Cup, Figures from a recent ECB survey show a seven per cent decrease in the total number of players playing cricket in teams – down from 908,000 in 2013 to 844,000 in 2014.

This is a reflection of the poor performance which is not entertaining younger audiences. In the 1980’S there were many heroes which young fans could admire such as the great Sir Ian Botham.

It seems that the England management prefer dull characters who are sensible within the dressing room yet do not perform out on the field. Pietersen was England’s leading run scorer and was also a versatile batsmen who could dismantle any attack on his day.

There is no doubt that England miss his destructive batting but they are too egoistic to admit this. Bangladesh have beaten England in  heroic manner to qualify for the Quarter-Finals and England yet again will not be in contention for the World Cup crown. But how long will this go on for?

Will the English fans just accept the fact that their side is just good enough to win a test series at home but major tournaments are really not their forte? These questions need to be answered and it is felt that a change of captain is not the answer.

Cook gracefully resigned after criticism from many, yet the Irish-born Morgan may be regretting his decision to play for England over his beloved Ireland, who still have a chance of making it through to the quarter finals. A country that has such great facilities for young cricketers aiming to become test players and one day start in an Ashes test match, have failed to understand that they need to adapt their game and player such as Pietersen were an inspiration to many.

England have lost 3 of their 5 ODI’S to Bangladesh and this is now becoming a frightening fact. Bangladesh will carry on this momentum to the next stage of the World Cup whilst England will have a lot of thinking to do on a long flight back to London. Should they just scrap ODI’S and concentrate on Test Matches because that is “real” cricket after all. England need to develop and become more dynamic let’s see whether the selectors call back Pietersen to salvage their lost reputation. 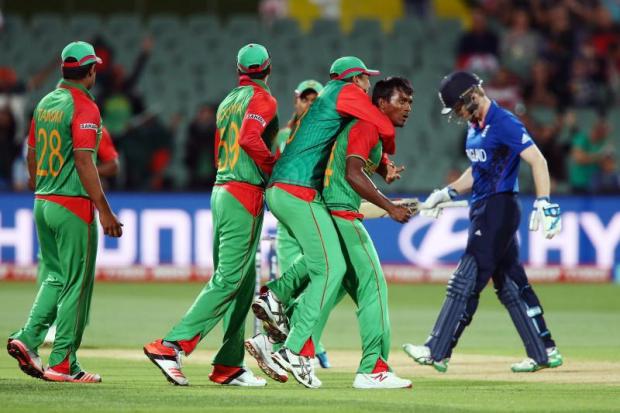