In 2014 it took until the 54th pick for a running back to be selected in the NFL draft. That player was Bishop Sankey out of Washington, and the Tennessee Titans decided to draft him. Both Jeremy Hill (55th pick), and Carlos Hyde (57th pick) quickly followed.

It took nearly until the third round for a running back to be selected. There is a reason for that; it’s the fact that the NFL is becoming a pass-first league. In the NFL, a quarterback is more likely to lead a team to a super bowl rather than a running back.

Last years running back class was relatively weak compared to this years. So this year don’t expect nearly two whole rounds to pass until a running back is selected. It may be as soon as late first or early second round.

With that being said, these are the running backs you may see taken off the board early in the draft.

Although his junior year with the Badgers was great, Melvin Gordon’s senior year was one for the ages. Gordon finished the 2015 season with 2,587 rushing yards, which is second in NCAA history only behind an all-time great Barry Sanders.  Gordon also finished with 29 touchdowns on the season, which is good enough for fifth in NCAA history.

Melvin Gordon’s draft stock significantly rose once Todd Gurley got suspended, and his season ended with a knee injury. Gordon could be taken anywhere from late first round to early second round. After his record-breaking season, any team would benefit from Gordon.

Todd Gurley had a fast start to the 2014 season. Through the first five weeks of the season, Gurley had already rushed for 773 yards, with eight touchdowns. After this phenomenal start, Gurley was a front-runner for the Heisman trophy, but after he violated NCAA rules, Gurley was suspended.

Gurley faced a four game suspension after he accepted more than $3,000 from autographed memorabilia and other items over a two-year span. During Gurley’s suspension, Georgia went 3-1. At this point, Georgia had a 7-2 record and Todd was now allowed to rejoin the team.

During his first game back against Auburn, in which Georgia won 34-7, Gurley rushed for 138 yards on 29 carries, and scored one touchdown. Despite a great game, Todd Gurley tore his left ACL, which sidelined him for the remainder of the season.

Although his season was cut short, Todd Gurley still declared for the 2015 NFL draft. With his draft stock taking a huge hit after this past season, Gurley could still make any NFL team happy.

Duke Johnson, out of Miami, started the 2014 season rather slowly. After failing to reach a 100 rushing game throughout the first four weeks of the season, Duke really turned on the jets during week five. During week five Duke Johnson, ironically enough, rushed for 155 yards against no other team, but the Duke Blue Devils.

On the season Johnson rushed for 1,652 yards and managed to score 10 touchdowns. Dukes junior year, was by far his best playing for the Hurricanes. After nearly reaching 1,000 yards his first two seasons in Miami, Johnson easily surpassed to impressive 1,000 yard mark.

As for his NFL stock, Duke Johnson will make any team in need of a running back happy. Although he may not be taken as soon as Gordon or Gurley, Johnson could very well be taken mid-to-late second round. 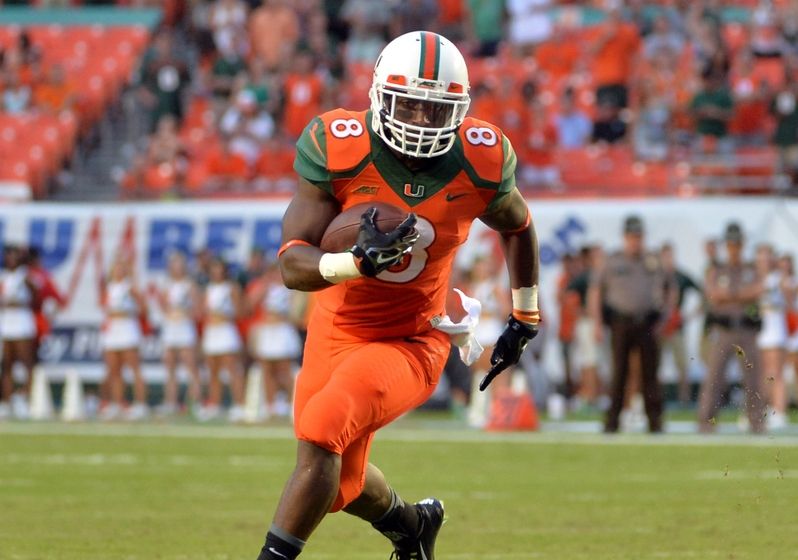