Five more Premier League games took place on Wednesday, which included Thomas Tuchel taking charge of his first game as Chelsea boss, a six-pointer at the bottom of the table at The Amex, and the chance for Man United to grab top spot once again at Old Trafford, let’s see what happened…

Burnley twice came from behind to net back-to-back wins in the division after defeating Aston Villa in an entertaining encounter at Turf Moor. Villa dominated the first period but only had one goal to show for it after Ollie Watkins had given them the lead on the quarter-hour mark, guiding home into the bottom corner after a lovely low ball in by Matt Target, and from nowhere Burnley levelled six minutes into the second period after a corner floated to the back post saw Ben Mee arrive to power home a header.

But with just over twenty minutes remaining Villa restored their lead after a sublime goal scored by Jack Grealish, the Villa talisman slipping a pass to Douglas Luiz before carrying on his run into the box to poke the Brazilian’s return ball beyond Nick Pope, however, Burnley pulled level once again with fifteen minutes to go after Dwight McNeil looked to drive a ball across goal, but it invaded all to find its way in. And incredibly Burnley netted what proved to be the winner four minutes later following a superb header from Chris Wood, rising to meet a McNeil cross, what a turnaround it had been from Sean Dyche’s men, and another big three points for the hosts.

Over at Stamford Bridge and Chelsea were held to a goalless draw by Wolves, Chelsea had a lot of the ball in the opening forty-five minutes but did little with it, with Giroud missing a cross and Anthony Rudiger seeing a header saved by Rui Patricio their best moments, whilst Wolves saw Leander Dendoncker head over Wolves best chance in the first half they spent mostly defending but doing it well. Chelsea continued to dominate the ball in the second period with Wolves happy to sit in and defend, with Chelsea’s best move seeing Ben Chilwell blast over, but Wolves then went the closest of anyone to scoring with a rare foray forward when Pedro Neto scooped an effort over Edouard Mendy but onto the top of the bar. Chelsea continued to press and saw Mateo Kovacic, Callum Hudson-Odoi and Kai Havertz go close, but Wolves stood firm and grabbed what could be a precious point at The Bridge, meaning Tuchel’s first game in charge ended goalless.

There were no goals at The Amex as 17th placed Brighton and 18th placed Fulham drew a blank. Brighton dominated the opening half and had the better chances, but they were unable to take any of them, and although The Cottagers were a bit more adventurous after the break, both sides only had one shot on target in a second half that was not a classic. The Seagulls then went close on a couple of occasions near the end, but Fulham had a golden chance to steal all three points right at the death when a loose ball broke to Ruben Loftus-Cheek and although he side-footed past Robert Sanchez, Lewis Dunk saved his side by throwing himself at the shot on the line to stop it going in.  It meant the game did end goalless and a point apiece for both, meaning it was as you were at the bottom.

Up in the north-west, the points were shared between Everton and Leicester, The Foxes started the contest well and were the better side, but the hosts grabbed the lead just past the half-hour mark, and it was a beauty from James Rodriguez as after a poor cross was not dealt with by Wesley Fofana, it came back to the Colombian who looked up and passed the ball into the far corner from twenty yards out, meaning the hosts went into the break a goal to the good. Leicester continued to dominate after the break and finally got their rewards midway through the second period when after Jordan Pickford had flapped at a cross, Harvey Barnes worked it back to Youri Tielemans who slammed a shot towards goal from the edge of the box and although Pickford got both hands to it, it squirmed past him and into the net.

You felt at this point Everton would have been pleased to come away with a point, they had been battered in this one but were still level, but The Toffees had two big chances near the end through Richarlison and Dom Calvert-Lewin to snatch a win, but didn’t, and the game ended all square.  And staying in the north-west Sheffield United caused probably the biggest shock this season by stunning Man United at Old Trafford to net their first win there since Boxing Day 1973. Midway through the first period,

The Blades grabbed a shock lead as Kean Bryan rose to head a corner in off the post for his first-ever Premier League goal, not a bad place to get it at either, especially as he was a youth product from the academy at Man City, and although the hosts had dominated possession, they did pretty much nothing with it and Chris Wilder would have been very happy at the halfway stage, whilst Ole Gunnar Solskjaer would have been demanding a lot more from his side. Just past the hour mark and Man United did bring themselves level as a corner swung into the box saw Harry Maguire send a lovely header into the bottom corner, and The Blades resolve had been breached, could the hosts now go on and win this and take the top spot off their City rivals?

Well, The Blades had other ideas as Oli Burke, who had just come on for Billy Sharp, received the ball inside the box and fired at goal and see it deflect off Axel Tuanzebe and in off the bar, and the visitors had just over fifteen minutes to hold onto what would be a remarkable win and a massive three points.

The hosts piled on the pressure to try and turn it around, but the Pink Wall stood firm and held on to record an enormous three points for Wilder’s side in what had been a herculean effort from all in The Blades side.  Huge blow to Ole and his boys, this was not expected but they must regroup and go again and get this out of their system pronto.

Let’s see how the table looked after tonight’s games… 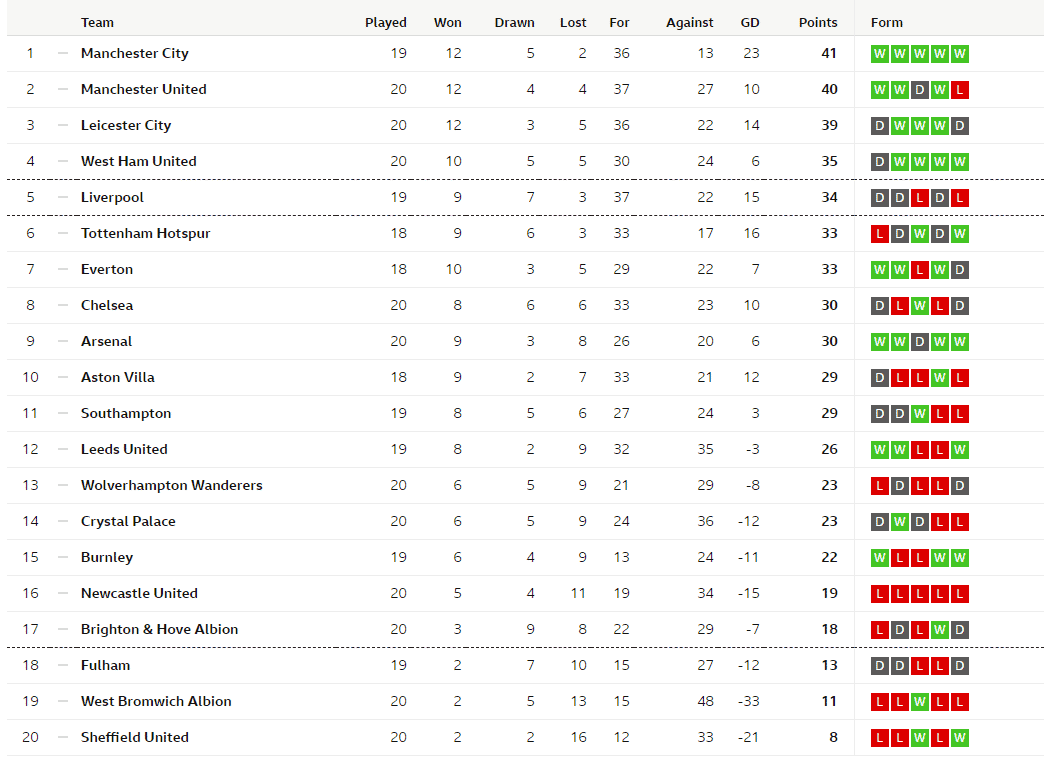 With United losing and Leicester dropping points as well, it was a good midweek for Man City who stay top by a point and gave a game in hand too, whilst West Ham remain in the top four after Everton failed to beat Leicester.  Great night for the Blades though and although they are still ten points from safety, who knows what this can do for Wilder’s troops, one thing is for sure, they will fight and fight until it’s no longer possible to survive. And back to back wins for Burnley sees them go nine clear of the drop zone now, it’s been a good few days for The Clarets, hasn’t it.

One more game to come this midweek, which sees Spurs host Liverpool on Thursday evening, Spurs win takes them into the top four, whilst a point would be enough for Liverpool to get into those champions league spots.  Should be a good way to end this midweek round of games. 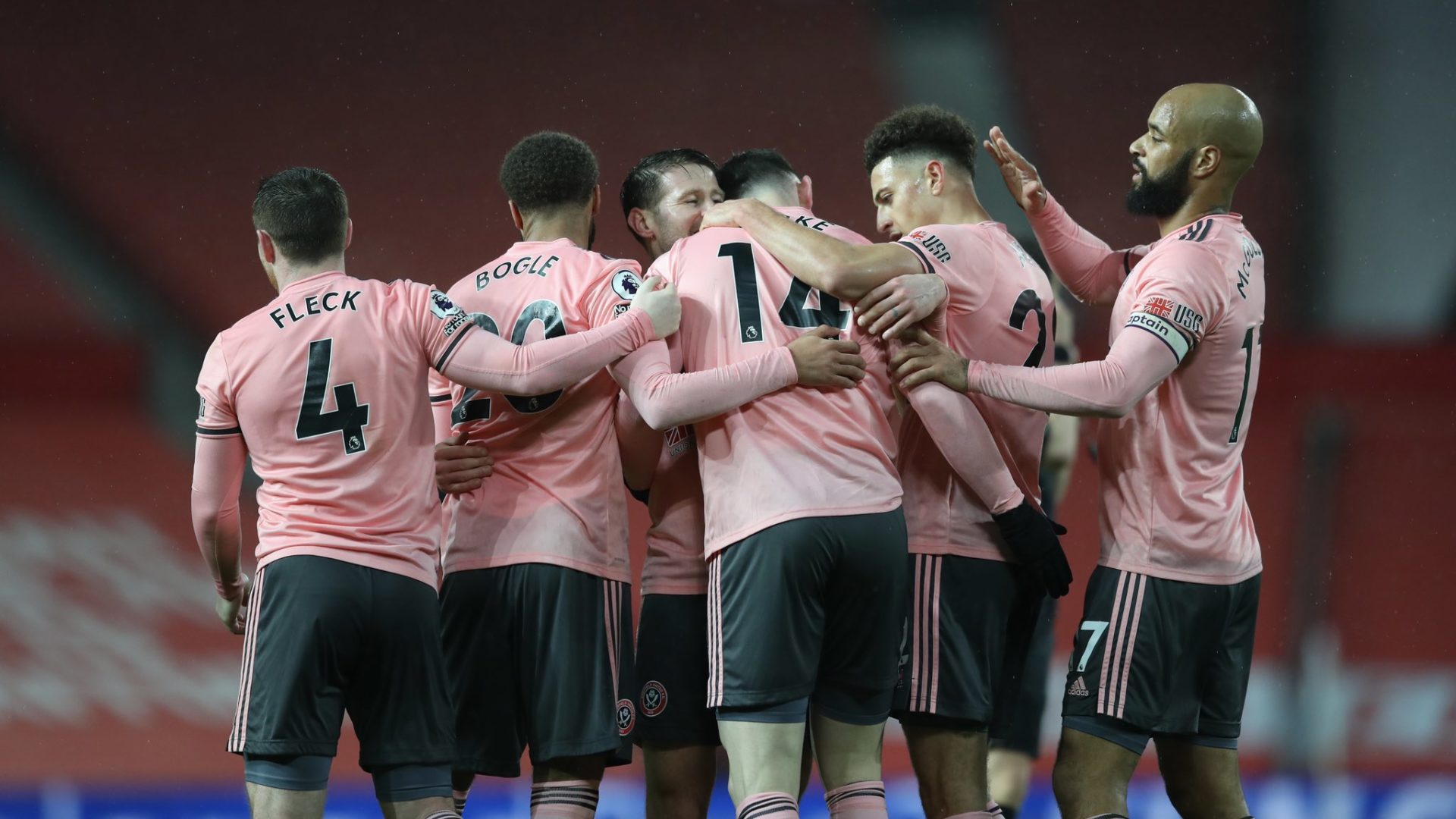