WrestleMania is getting closer and the writing seems to be on the wall. Bray Wyatt will take on the Undertaker at the show of shows, a feud between these two is an interesting situation due to the similar natures of their characters however at this point in time the feud doesn’t serve any purpose to Bray Wyatt.

That match served to show that The Undertaker is no longer the force that he was considered in the past, it also showed that he needs to retire.

The one reason that The Undertaker had to appear at WrestleMania was the streak which ended last year.  The streak whilst being sentimental became hard to buy into after The Undertaker’s series of matches with Shawn Michaels.

When The Undertaker took on Triple H at WrestleMania 27 he was unable to leave the ring with his own power which highlighted the toll that wrestling took on his body.

From then until now age has continued to catch up with his body and this was perfectly displayed last year.

Undertaker with his wife Michelle McCool

Much has been made of The Undertaker’s condition since the last WrestleMania with some sources stating that he’s not in very good shape at the moment. Since 2011 The Undertaker has continued to look feebler coming into WrestleMania and no doubt he’ll look like what he did last year, possibly even worse.

If he were to face Bray Wyatt looking feeble and put Wyatt over, it realistically wouldn’t do much for Wyatt.

WWE would love to promote the match as the eater of worlds vs. The phenom but in reality it comes across as Bray Wyatt facing a man who’s well past his best.

The outcome of the match would look good on paper if Bray Wyatt beat The Undertaker but fans would be aware that Bray Wyatt beat up an old man who never realistically stood a chance.

Bray Wyatt is touted as one of the top stars of the future and unfortunately for Bray Wyatt, beating The Undertaker as he is now isn’t enough to convince the fans that he will be.

The Undertaker’s match against Bray Wyatt will make for a fitting send off, after that WWE will need to let The Undertaker rest as the value of defeating him has been lessened significantly in recent years. 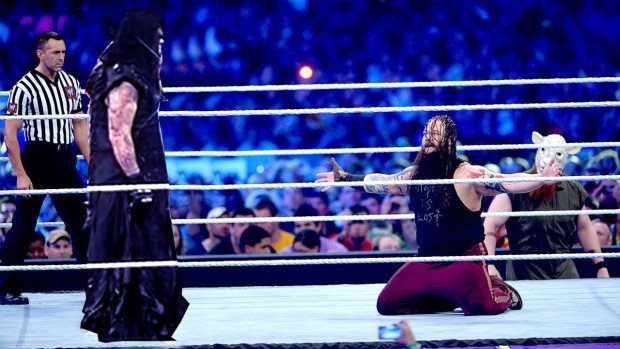