Bangladesh faced Afghanistan in their opening game of the ICC World Cup 2015 at the Manuka Oval, Canberra. The Tigers won the toss and chose to bat first.

Bangladesh were 52/2 when Soumya Sarkar and Mahmudullah scored 50 runs in their 3rd wicket partnership to accelerate the run rate. Soumya scored 28 runs from 25 balls, hitting 3 fours and a six before Shapoor Zadran dismissed him. Mahmudullah also followed suit, scoring 23 runs after being caught by Afsar Zazai. 119/4 after 29.1 overs and Bangladesh required something magical to post a total worthy of defending.

All rounder Shakib and wicketkeeper Mushfiq took control of the proceedings from there. They scored 114 runs in the 5th wicket partnership at a run rate of 7.35 per over. Shakib(63) and Mushfiq(71) helped Bangladesh to score past 200 and looked to control the pace of the game. However, Afghan bowlers regained control of the game in the last 7 overs.

Hamid Hassan dismissed Shakib, bringing an end to the 5th wicket partnership. At 233/5, the Bangladeshi batting line up suddenly collapsed. Hamid also dismissed Sabbir Rahman before skipper Nabi dismissed Mushfiq. Mashrafee scored 12 runs hitting 3 boundaries, trying to speed up the scoring. However, his partner Mominul was run out and he too was dismissed the next ball. Bangladesh scored 4 more runs before being all out at 267, when Aftab Alam picked up the wicket of Taskin, to end their innings.

Chasing 267, Afghanistan got to a woeful start losing their top 3 batsmen, after putting only 3 runs on the scoreboard. Mashrafee picked up 2 wickets and Rubel dismissed Afsar Zazai. A 62 run partnership in the 4th wicket by Nawroz Mangal and Samiullah Shenwari helped Afghanistan accelerate their run chase. Nawroz scored 27 before being dismissed by Mahmudullah and Samiullah(42) was run out owing to Sabbir Rahman’s brilliant fielding! 78/5 and the Afghans were starting to lose the match from their grip.

Mohammad Nabi and Najibullah Zadran scored 58 runs in the 6th wicket, at a run rate of 5.11 per over, aiming to reduce the damage and chase the target. World no. 1 all-rounder Shakib made the breakthrough for Bangladesh after dismissing Zadran. Mashrafee picked up the most important wicket of Nabi, who scored 44 off 43 balls, hitting 5 fours in the following over. 136/7 and the match had swung in Bangladesh’s way!

Afghanistan scored 18 runs in their 8th wicket partnership before Shakib removed Mirwais Ashraf in the 41st over. Bangladesh wrapped up the match within the next two overs when Taskin removed Hamid Hassan and Mushfiq made a brilliant run out from Soumya’s throw to dismiss Aftab Alam. That brought an end to Afghanistan’s innings in the 43rd over at 162! Shakib picked up two wickets and Mashrafee picked up three, including the most important wicket of Mohammad Nabi.

Bangladesh won their first game by 105 runs and Mushfiqur Rahim was declared the man of the match for his superb effort with the bat, scoring 71 runs and helping the team to score a total worthy of defending! During the presentation ceremony, both Mashrafee and Mushfiq stressed on the importance of winning the first game of the campaign and thanked the wonderful spectators for their support.

The win gives Bangladesh the much-needed boost to their confidence as they look forward to playing their next game against the hosts, Australia on February 21 at Brisbane. Afghanistan, on the other hand, will face Sri Lanka on February 22 at Dunedin. 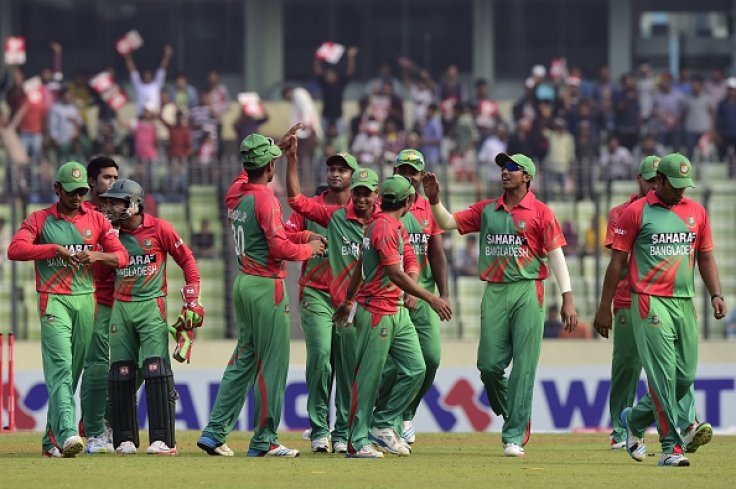