The latest round of Premier League fixtures took place this weekend, starting on Friday evening as Newcastle welcomed Villa to St James Park…

This was a fairly forgettable game until the last five or ten minutes, the majority of the contest saw both sides struggle to really create too much, but it was to have a dramatic ending that was for sure. A largely dull encounter sprung to life when Newcastle sub Jacob Murphy curled an effort against the bar, and then with four minutes left Villa looked as if they had grafted another hard-earned win when an Ollie Watkins headed and deflected in off Ciaran Clark via the underside of the bar.

But, just as the hosts looked as if they were heading for another defeat upped popped skipper Jamaal Lascelles to power home a Murphy cross with his head and rescue what could be a very important point come the end of the season.

It was a blow for Villa who must have thought they had pinched another win and enhanced their chances of European football for next season, the West Midlands side has not been in European competition since 2010 so would love to return there for next season, but the late Newcastle leveller would have certainly damaged those aspirations.

They take on Spurs at Villa Park next weekend, another side in the mix for European football next season, so that will be an important one for sure, as for Newcastle, well they have a two-point cushion over Brighton & Fulham now and next weekend they go to The Amex to take on The Seagulls, that my friend is a huge game.

There may have been no goals in this one, but it was a very high-tempo contest that just lacked that clinical edge from both, meaning a rare goalless draw involving Leeds this term. Both sides struck the woodwork, Leeds almost went behind in bizarre fashion after Luke Aylings clearance hit teammate Diego Llorente and looped over keeper Iilan Meslier but came back off the bar, and then Chelsea was thankful for Edouard Mendy after he tipped Tyler Roberts chip onto the same piece of woodwork. Mendy also saved well from a Raphinha effort to deny the hosts, whilst the Blues wasted several other good chances, including two for Kai Havertz, who was instrumental in their win over Everton on Monday night.

Chelsea does stretch their unbeaten run under Thomas Tuchel to twelve games though, whilst Leeds have only won one of their last six games now and were also dealt a big blow when losing top scorer Patrick Bamford to injury in the first period, they will hope that is not serious.

Is that curtains for West Brom? This latest setback means they fail to close the gap to safety and could see that gap increased as the weekend goes on, but they rarely looked like salvaging a point in this one with their only shot on target coming from a second-half effort by Mbaye Diagne.

The winning moment came in the first period when VAR adjudged that Baggies defender Darnell Furlong had blocked a shot from Wilfred Zaha, who was making his first start after return from injury, and skipper Luka Milivojevic stepped up to convert the spot-kick which proved enough to hand The Eagles their first home win since January.

Palace did have chances to double their lead but saw Sam Johnstone save brilliantly from Christian Benteke, and the Belgian striker was also denied by a last gasp tackle from Kyle Bartley in another opening for the hosts, but this win takes them to 37 points and just one more win from that magical forty-point mark and pretty much confirm their place in the division next term, although that looks pretty likely already.

This was a huge win for Burnley in the battle against the drop, and what proved to be the winning goal was worth a few looks too, the visitors took the lead when Chris Wood capitalised on some poor defending to fire into the bottom corner, and then the visitors doubled their lead midway through the first half with a wonder goal by Dwight McNeil, beating Allan before curling home an absolute beauty and when Johann Gudmundsson struck the post not long after, it seemed the Clarets could run away with this one.

Jordan Pickford then had to go off injured after trying to save that Gudmundsson effort, meaning sub keeper Joao Virginia came on to make his Premier League debut for the hosts, but just past the half-hour mark Everton got themselves back into the contest when a pinpoint cross from Tom Davies found Dom Calvert-Lewin who powered home a close-range header and it was game on.

Calvert-Lewin had a couple of openings but failed to convert as Everton looked to get on level terms, but Burnley had chances to seal the deal but saw a Ben Mee looping header come back off the bar, and then Matěj Vydra saw a good chance well stopped by Virginia, however, Burnley did hold on to take a big win and put more daylight between themselves and the bottom three, whilst defeat for Everton dents their top-four hopes as their dodgy home form this season continues.

This game was ultimately decided in a mad first fifteen minutes in the second half where the hosts normally resolute defence in recent times handed City three goals and the game along with it as the visitors continue to cruise towards the title.

City really has an embarrassment of riches don’t they, and even after making seven changes from their midweek win over Southampton they can still field a top-quality side with the likes of Gabriel Jesus and Sergio Aguero up front, Aguero was even handed the captains armband for this one in a rare start, but with the likes of Kevin de Bruyne, Riyad Mahrez, Phil Foden and Ilkay Gundogan on the bench, Pep may have had an eye on Tuesday’s champions league tie against Borussia Monchengladbach.

Fulham knew they could climb out of the bottom three if they avoided defeat, but they knew they had to be on maximum alert at the back and play the perfect game, and it certainly looked like they would make things tough for the visitors after a decent first period, but it all unravelled for Fulham after the break as they allowed John Stones to steal in to convert a Joao Cancelo cross less than two minutes after the break, and then they handed City a second eleven minutes in the second half as they handed the ball to Jesus who rounded keeper Alphonse Areola before smashing home.

Moments later after Tosin had made an error, he fouled Ferran Torres in trying to win back the ball, a penalty was called, and Aguero stepped up to net his first Premier League goal since January 2020, so relief for him, and it meant City could cruise to another three points and increase their lead at the top further still.

A blow for Fulham though who didn’t help themselves at all, but they must put this behind them and try and get back on track in their fight for survival, they are still well in touch with the teams above and know they need to try and get something from their home game against Leeds next Friday night.

Let’s see what that does to the table… 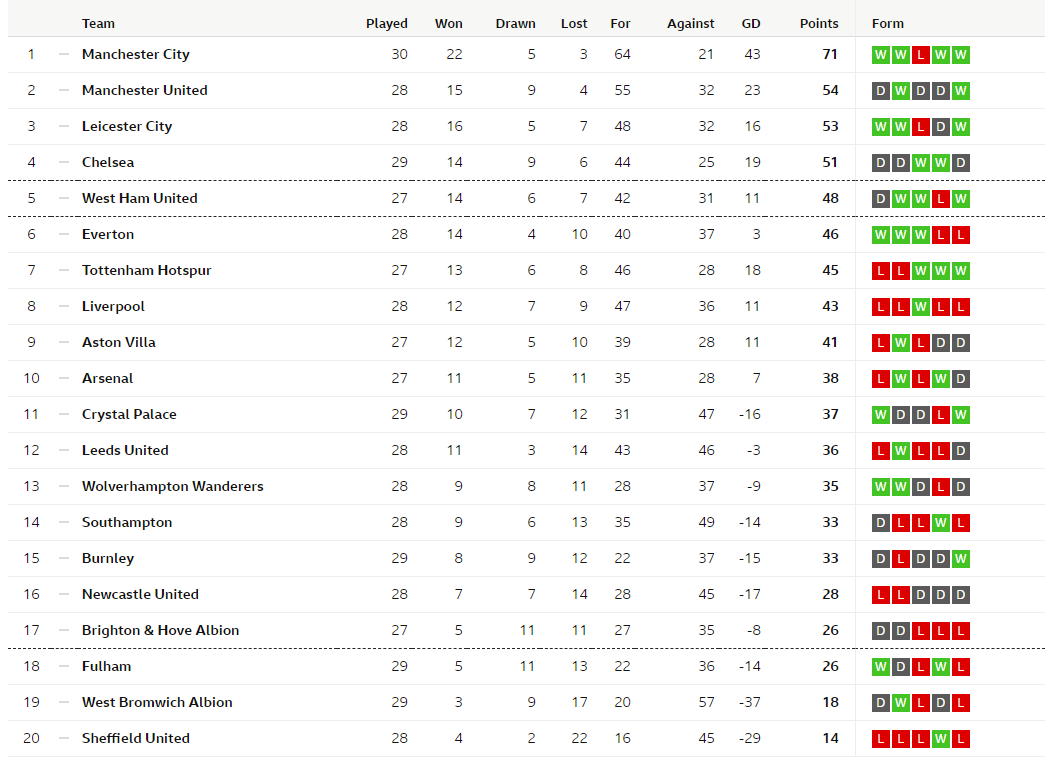 Manchester City is now seventeen points clear of the rest, although United and Leicester can close that gap on Sunday albeit it is still going to be a gap too big to overcome ultimately, Chelsea remains in the top four and is three clear of West Ham despite dropping points at Leeds. Palace moved three points closer to safety after defeating West Brom who see another game go by and their task of survival made even harder, and Burnley improved their chances of survival with a super win at Goodison, a result which harms The Toffees top-four chances, now five points behind fourth place.

A look ahead now to the remaining fixtures for the weekend…

Southampton v Brighton & Hove Albion (12pm) (A Saints win could see them go ten points clear of the bottom three, and just four points from that forty-point mark, Brighton could go three clear of the drop zone if they grab victory)

Leicester City v Sheffield United (2pm) (The Foxes know a win would take them all the way up to second for the time being, The Blades, who on Saturday saw manager Chris Wilder leave by mutual consent, need wins desperately and if they managed to get one here could be nine points from safety although with only nine games to go)

Arsenal v Tottenham Hotspur (4.30pm) (North London bragging rights are on offer at The Emirates, Spurs won the corresponding fixture at the Tottenham Hotspur Stadium earlier in the campaign and if they can do the double over their rivals, they would be three points off the top four, however Arsenal will not want that to happen and if they can pull off a win, they would keep their outside chances of Europe alive)

Manchester United v West Ham United (7.15pm) (Man United could be down to third by the time this game comes around but know a win takes them back second once again, however they welcome a Hammers side who are showing no fear this season so will make it a very tough contest at Old Trafford, and if West Ham do win, they would go level on points with Chelsea in fourth)

Wolverhampton Wanderers v Liverpool (8pm) (If Wolves can pick up three points against a Liverpool side who are struggling for confidence lately, they will be two points off that forty-point mark, and only five points behind a Liverpool side who desperately need to pick up points if they harbour dreams of grabbing a champion’s league spot for next season) 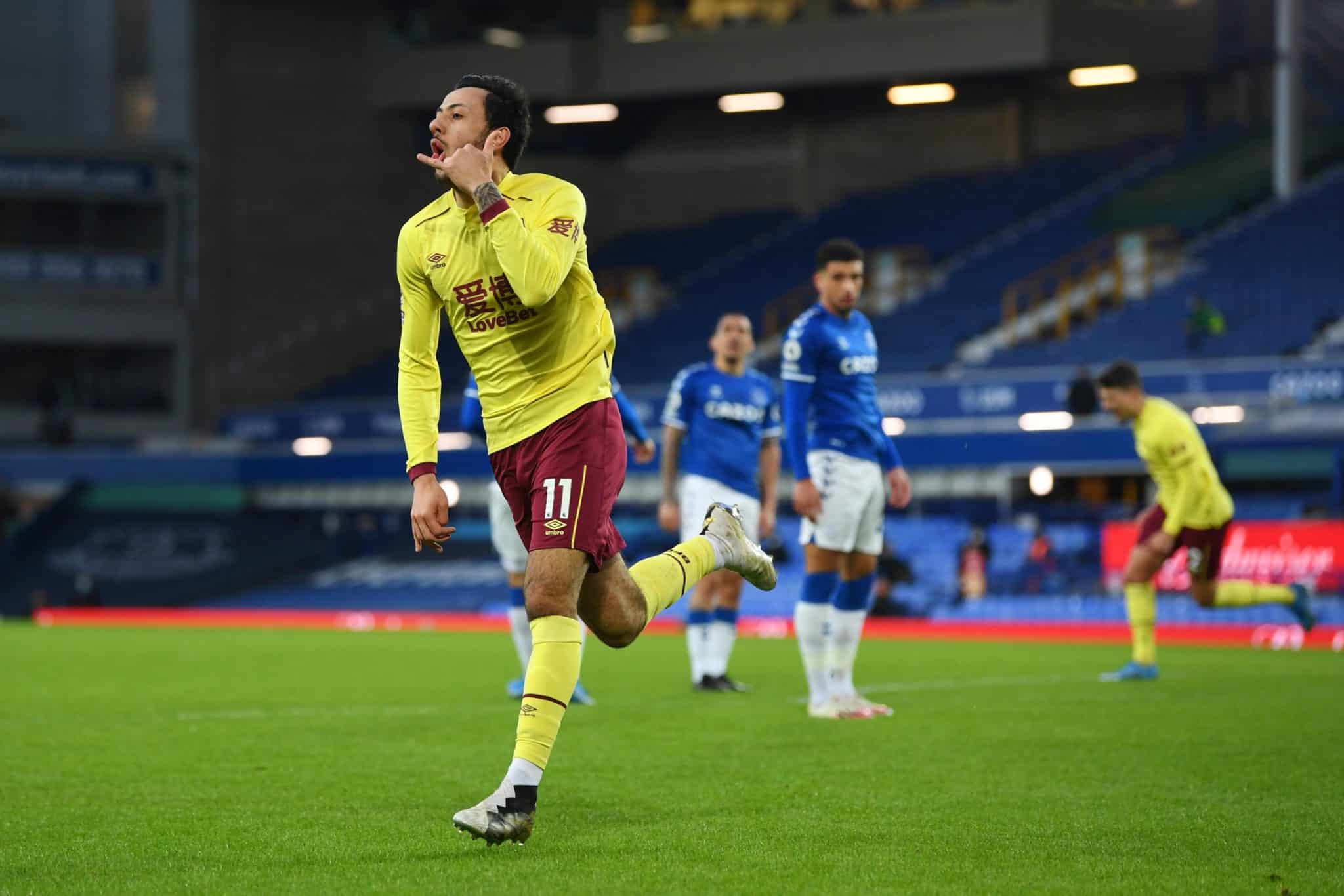