With Summerslam still three weeks away, a lot of the Smackdown storylines may seem slightly behind schedule, but that concern was certainly put to rest after tonight’s episode which saw the return of Charlotte Flair.

Jeff Hardy took a beating at the hands of Randy Orton and could have huge repercussions for future storylines while Samoa Joe did not hold back when addressing AJ Style.

Here are the results, grades and analysis for Smackdown:

Smackdown kicked off with a promo from Becky Lynch before she was interrupted by Carmella who wanted to congratulate Lynch on her wins and was putting on a humble facade.

As she went to shake hands, James Ellsworth’s music hit and everyone was distracted and Carmella took advantage and hit Lynch from behind with the title.

The Smackdown Women’s Champion pulled out a chair and prepared to DDT Lynch onto it, but out came Charlotte Flair to make the save.

A light-hearted promo from the pair before their match against The Bar.

Paige tells Carmella she should be ashamed of what she did before Mella responds saying that Paige will never be champion again.

Clearly pissed off, Paige sets up a match between Charlotte Flair and Carmella and if the champ loses, Flair will be added to the Summerslam match, making it a triple threat.

The Bar def. The Usos via pinfall: B+

Great to see Sheamus and Cesaro back on TV and The New Day came out to help on commentary, complete with their own bright orange table topped with pancakes.

The winner of the match will go on to face The New Day next week in the Tag Team title tournament.

The turning point in the match came when Cesaro pushed Jimmy off the top rope and into the barricade on the outside of the ring.

A near fall for The Usos made it close but Cesaro was able to make the save. With Sheamus still down, Cesaro interrupted the Usos Splash with an uppercut, then Sheamus was quick enough to get his knees up and pick up the win with a roll-up pin.

Good match that made both teams look strong, especially The Usos who haven’t been in a proper program since being champs.

The New Day climbed into the ring after the match and had a staredown with The Bar before Sheamus and Cesaro retreated out of the ring.

Charlotte is interviewed backstage and discusses how “Carmella’s big mouth has given me a golden opportunity.”

She continues to say that she’s back and has her eyes on the throne.

A deeply uncomfortable promo from Joe as he called out AJ Styles’ commitment to his family because he puts the WWE title ahead of everything else in his life.

He told the fans to rest easy because at Summerslam he’s going to win the title and Styles can actually go home and be a good father for his family.

“You feel more comfortable living on the road and out of a suitcase, than being at home and being a husband to your wife.”

“You’ve put champion above everything else, even if it means that you’re a failure as a father.”

“I am coming soon and I will take it all from you!”

“After I’m done tearing down your house, after I’m done putting you to sleep, your wife and kids will have their daddy back. But I’ll be WWE champion.”

A heavy hitting promo from Joe, did he cross the line? Seems on point for Joe but still a little too far and hard for the commentators to back it up.

Let’s see how Styles responds to the harsh words next week.

After the attack last week cost him the US title, Hardy called out Orton for a fight. Before the pair could get to it, Shinsuke Nakamura attacked Hardy from behind.

Lining up the Kinshasa, Hardy was left defenceless before Orton stepped in front, essentially declaring that he’s next in line for the title.

Orton then told him to “get him” and the Kinshasa put Hardy down for the count. A quick staredown between the pair saw Nakamura leave the ring before Orton lined up an RKO.

But instead of hitting it, Orton just flipped Hardy back onto the mat and started working away at his leg.

Orton hit a DDT on Hardy from the ring apron onto the floor which left him completely helpless. Really just a vicious assault on Hardy, Orton declaring he is well and truly a heel who will stop at nothing.

He finished off the segment stripping Hardy of his upper ringwear, stealing his necklace and pouring water all over his face and wiping away the face paint.

Orton essentially stripped Hardy of his identity and this could be the perfect way to send Jeff off into the Deleted Universe alongside his brother Matt and potentially Bray Wyatt. Good, long-term booking from the WWE Creative if that is the direction they’re going in.

An interesting interview with Lynch as she discussed potentially having to face both Charlotte Flair and Carmella at Summerslam.

Renee Young suggested she may be rooting for Carmella to win against Flair later in the night, which she quickly shut down.

Zelina Vega makes her Smackdown debut as she takes on Lana after an altercation last week at ringside.

The height difference is immediately visible with Vega standing at 5′ tall.

Despite the height difference being used as a gimmick early on with both competitors pushing and shoving, the match finally got going in a fairly straightforward affair.

Things started to pick up when Andrade Cien Almas tried to distract Lana while she was on the top rope. Out came Aiden English who pulled him off the apron but the distraction was enough for Vega to quick to get the roll-up win.

No real blame on English here but the story continues as Lana will probably blame him for the distraction. I’m still unsure about the eventual split and which way it will go.

English meets with Lana backstage and said he was trying to do the right thing and Lana tells him to leave her alone.

Rusev arrives from around the corner and Lana said that she really could’ve used him at the ring and storms off.

Quite the visceral promo from the Blugeon Brother who said they’ll have no problem taking care of The Bar or The New Day.

I would personally love to see the Blugeon Brothers pick up another dominant victory over whoever they end up facing before they are given an actual challenge.

It was great to see The Bar back in action tonight as well and they could definitely pose somewhat of a challenge for the titles. I just don’t think it’s the right time for the titles to change hands just yet.

Bryan kicks off his promo by putting over the Evolution PPV, saying that his wife was in a match when #GiveDivasAChance went viral.

He used it as a segue to discuss what happened last week with The Miz, saying it’s “two steps forward and one step back.”

Bryan called out The Miz who was on-set for Miz and Mrs. and once again put over the show.

Bryan said that Miz is just hiding from him and that he’s “nothing more than a coward.”

Miz hit back saying that he’s carried Bryan for 10 years, ever since he was his NXT rookie. But Bryan hit back quickly:

He also challenged the Miz to a match at Summerslam but he hit back saying he needs to move on from the past. Then in a weird finish, he started pulling up pictures of babies crying and had the sound played throughout the arena.

Definitely a weird finish to what was an otherwise good promo from both superstars. Bryan continues to play the “I do this because I love it” card while the Miz continues to push his show and how he’s carried Bryan for his entire career.

Perhaps @BeckyLynchWWE isn't too happy about her best friend coming back after all… #SDLive @MsCharlotteWWE pic.twitter.com/YJzPkPu6m8

Carmella had a quick interview backstage with Renee Young where she said that she doesn’t believe in the friendship between Flair and Becky Lynch.

Flair was back to her best and it didn’t look like she’s missed a beat at all while Carmella continues to perform well as a cowardly heel who escapes by the skin of her teeth.

At one point she even threw Flair into the timekeeper’s area and scampered back into the ring, urging the referee to begin his count. It’s the little things that make a big difference for her.

A moonsault off the barricade was a great spot mid-way through the match and multiple cuts to Lynch watching backstage contiued to remind the viewers what could happen.

Flair ended up getting the victory with the Figure-8 submission, enough to punch her ticket to Summerslam.

Lynch is seen visibly upset backstage, which could be the catalyst for a potential heel turn? I can’t see it happening as she’s too loved by the fans and just doesn’t carry herself that way, but we all said the same thing about Sami Zayn?

It probably won’t end up happening but still just a thought.

A pretty good episode of Smackdown with some great matches. The Bar and The Usos did really well to put on a show and the promo from Samoa Joe, while deeply uncomfortable, hit the nerve that he wanted to hit.

The Miz and Daniel Bryan had a decent back and forth but the whole crybaby stuff was a bit over the top and corny.

We finally got some major movement storywise and the Smackdown side of Summerslam is starting to properly take shape!

See you all next week on Raw! 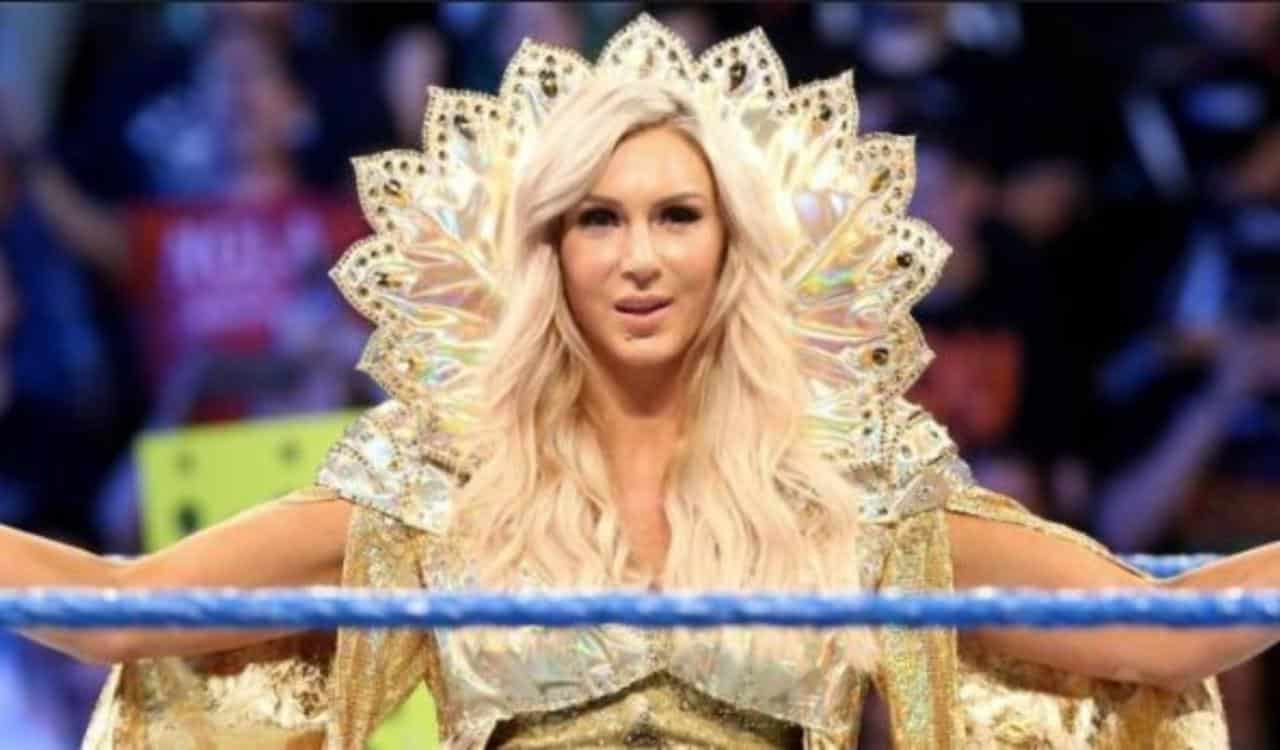