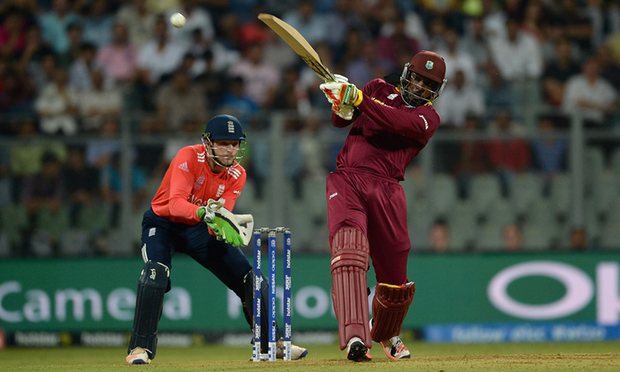 West Indies beat England by six wickets today in Group 1 opener at ICC World T20 in Mumbai, it was a batting masterclass from Chris Gayle after he knocked England fielders all over the place.

The stage was set for England’s first match in the Group 1 opener at ICC World T20, they were put in to bat by the West Indies,

But it was a remarkable innings from West Indies Chris Gayle that gave England no chance of winning, he smashed 11 sixes as they beat England by six wickets this afternoon.

England were put in to bat first, they made 182/6, but Gayle simply took their attack apart and made it look easy with his 100 not out from just 48 balls.

Chris Gayle became the first player in Twenty20 Internationals to score two centuries in the World Twenty20. He smashed 117 in the 2007 World Cup against South Africa in Johannesburg.

Chris Gayle smashed 11 sixes in the match against England. In the process, he became the leading six-hitter in Twenty20 Internationals, going past Brendon McCullum’s tally of 91 sixes. He achieved the feat in just 46 games, compared to McCullum’s 70 matches