The Premier League was back with a full programme of fixtures in midweek, beginning on Tuesday which saw West Ham in with a chance of getting into the top four, Newcastle and Leeds looking for a much-needed win, Arsenal looking for revenge over The Saints after their weekends FA Cup loss their and Man City having the chance of going top…

West Ham climbed into the top four after they won a five-goal thriller at Selhurst Park in a London Derby. It didn’t take long for Wilfred Zaha to announce his return to the Palace side after he gave them a third-minute lead, producing a nice finish after playing a one-two with Christian Benteke, but The Hammers levelled after just eight minutes after Thomas Soucek nodded home from close range after a decent flick into the middle by Michail Antonio. And just past the midway point of the first period Soucek was at it again, poking home from close range after a brilliant delivery from Aaron Cresswell to see the visitors turn this one around.

Twenty minutes into the second period The Hammers increased their lead when a corner in from the right saw Craig Dawson beat Gary Cahill to the cross and head home, and although Palace pulled one back through Michy Batshuayi six minutes into added on time, West Ham held on to take the three points which lifted them into the Champions League spots, what a job David Moyes is doing this season.

And Leeds picked up an important three points and heaped more pressure on Steve Bruce and his Newcastle side with victory at St James Park. On seventeen minutes Leeds struck, as after the hosts lost the ball in midfield, Patrick Bamford strode forward and although he played Rodrigo wide, he managed to pick out Raphinha who took a touch and sent a lovely finish into the bottom corner, and they had punished the host’s error to the max, but twelve minutes into the second period Newcastle found a leveller as after Isaac Hayden had won the ball back, Jonjo Shelvey played a pass to Callum Wilson who laid a lovely ball into the path of Miguel Almiron who fired home.

But any joy Newcastle had was shortly taken away after Leeds retook the lead on the hour mark after a wonderful pass from Raphinha found Jack Harrison who fired a lovely finish across goal and into the far corner, and although Newcastle showed a lot more attacking prowess in the second period, they could not find a leveller and fell to another defeat.

The Gunners are up to eighth place now after they recovered from going behind early to to defeat Southampton at St Marys.  After Alexander Lacazette had missed a golden chance for the Gunners with less than a minute on the clock, The Saints led after three minutes as a James Ward-Prowse corner saw Stuart Armstrong run onto it and fire a lovely effort into the visitor’s net, but just four minutes afterwards as a lovely ball from Granit Zhaka found Nicolas Pepe who finished well, and the game was all square. And seven minutes before half time Arsenal had the lead after a lovely ball from Lacazette into the path of Bukayo Saka saw him round the onrushing Alex McCarthy before slotting into the open net. With eighteen minutes to go Arsenal put together a brilliant move to increase their lead as a lovely ball over to Saka by Cedric Soares saw the former lay a ball across goal for Lacazette who tapped home at the far post, and it sealed a very good win and gained some revenge for their FA Cup loss at the same ground at the weekend.

Over at The Hawthorns and Man City crushed a sorry West Brom to climb to the summit of the Premier League. It took City just six minutes to break through after Joao Cancelo found Ilkay Gundogan on the edge of the box and he swivelled smartly before firing a lovely effort into the bottom corner for his sixth goal in his last eight Premier League games, and then after twenty-one minutes City made it two when Joao Cancelo curled a lovely effort home, this after the flag had gone up against Bernando Silva before he cut it back, but VAR checked and the goal stood, and West Brom was facing a potential heavy defeat here.

And just before the half-hour mark Gundogan had yet another goal to his name after he pounced on the edge of the box to rob the ball off the hosts before going past Dara O’Shea and slotted home, and then it got worse for The Baggies as City added a fourth just before the break after Riyad Mahrez cut inside and belted an effort into the far corner, and City were cruising.

Eleven minutes into the second period City had a fifth after a great move ended with Raheem Sterling tapping home a Mahrez ball across goal, and thankfully for West Brom the visitors declared at five as they cruised to the top of the league.  It was another tough night for The Baggies though who have the worst goal difference in the division by six goals now and remain six points from safety.

Here is how the table looks after this evening’s games… 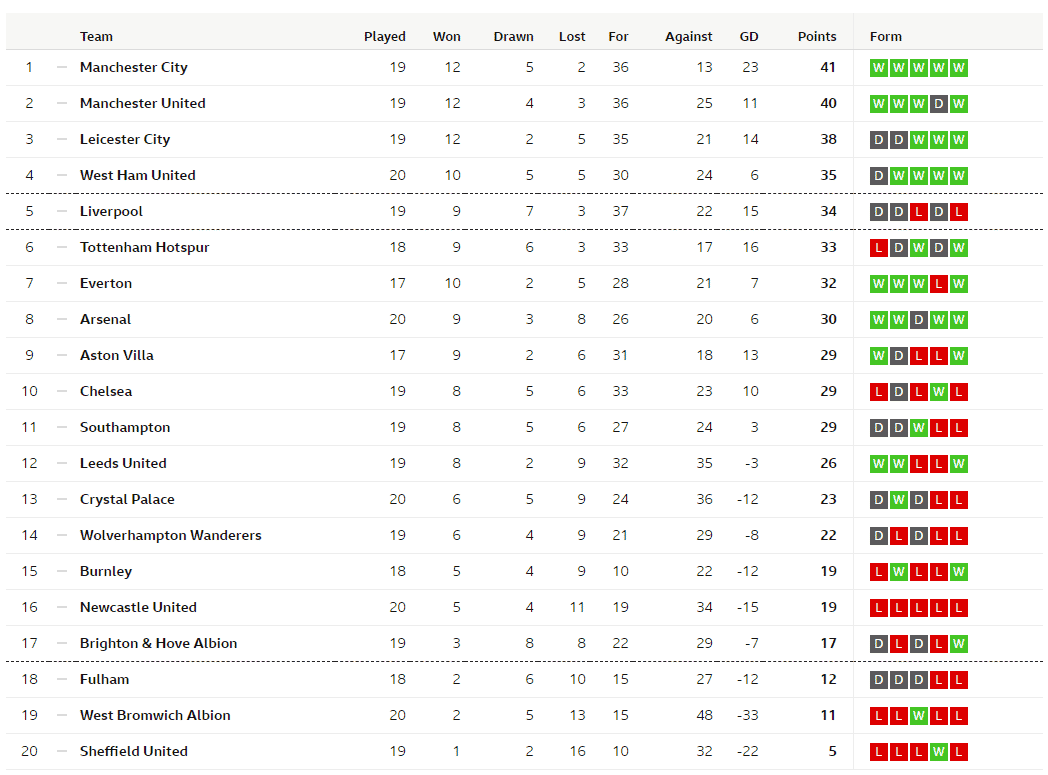 City hit the top and are looking very good right now, and West Ham are into the top four, who would have thought that possible eh? Arsenal is now into eighth and are just five points off champions league football, whilst West Brom’s goal difference took a battering this evening and they remain deep in trouble.

Here are the remaining fixtures this midweek…

Thomas Tuchel’s reign as Chelsea manager begins on Wednesday with a home match against an out of form Wolves, whilst there is a big contest down at the bottom as Brighton take on Fulham at The Amex, and it’s second Vs bottom at Old Trafford as United look to regain top spot with victory over The Blades.  And then the weekends with a big matchup between Spurs and Liverpool at The Tottenham Hotspur Stadium.  The big games just keep on coming!!! 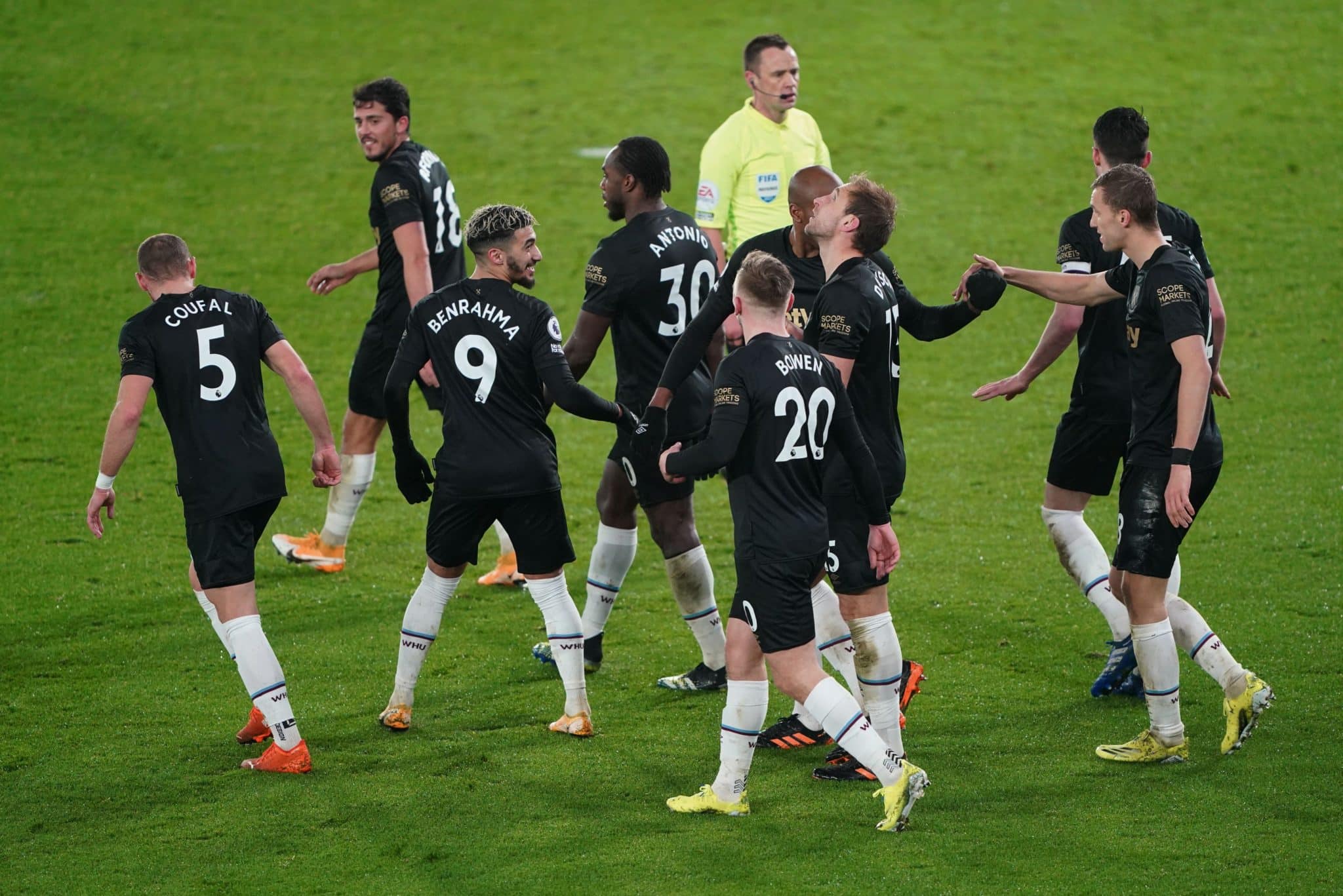