There are no shortage of conspiracies when it comes to the NFL and it’s officiating. This year, however, the Cleveland Browns have been seemingly targeted by the zebras. Fans of the Browns could quickly point out several times where poor officiating has changed the fate of their favorite team’s season.

The craziest part of this particular season’s officiating is there has often been consensus on the bad calls. Commentators and opposing fans alike have acknowledged the calls going against the Browns this season. In 2018, if that isn’t a testament to a problem, I don’t know what is.

The NFL’s solution (?) of a weekly letter writing campaign ceases to be a satisfactory conclusion to these bad calls. The majority of them have had a direct impact on the either the outcome of the game or the score board. And some of them are just flat out flabbergasting. Violations of rules, for the most part, are objective. So whats the problem?

Why aren’t the NFL’s officials not making correct calls? Before this season, the Browns have won just 1 out of their last 32 games. Why are they being officiated as if they are some juggernaut that is dominating their opponents so easily that the very fabric of competition is being ripped to shreds by their overpowering hands? Don’t believe me? Let’s take a look at just the first 4 games of the season.

The Browns’ AFC North arch-rivals, the Pittsburgh Steelers. Okay, maybe it’s more like a merciless big brother. Since returning to the NFL in 1999, the Browns have played the Steelers 40 times (including 1 playoff game). Of those 40 games the Steelers have won all but 6. When opportunities like that which occurred in Week 1 come around, its pretty frustrating when control of the game is taken from you.

For instance this “Roughing the Passer” call on Myles Garrett that the NFL later admitted should not have been called. The following play, the Steelers scored a touchdown. That’s 7 points on the board that never should have happened. The game ended in a tie. Take away those 7 points and count it as one of those elusive wins for the Cleveland Browns.

Roughing the passer call on Myles Garrett. Landed on Roethlisberger with his body weight. A fourth down stop turned into a touchdown the very next play. pic.twitter.com/fHGgRYTWSP

The following was a blatant pass interference call in the end-zone the refs choked away. They claimed the defender was going for the ball. The problem with this claim is that Jets DB Doug Middleton, if he was indeed going for the ball, ran past the ball’s trajectory by about 3 steps and collided with Antonio Callaway.

If Middleton was actually going for the ball, he stops before he runs into Callaway. This penalty, if called as should have been, gives the Browns 3 chances to score from the 1 yard line. At the very least they come away with the easiest field goal in the game. That’s 3 more points on the board and prevents this game from going in to OT., Browns win either way.

No game to this point has been more ludicrously officiated than this Week 3 game against the Oakland Raiders. It was so bad that it almost gave credence to the conspiracy theorists who believe the NFL was doing their golden boy Jon Gruden a solid. I will be fair with the blasting of the officiating in this game. There was a play where Marshawn Lynch was in Beast Mode and it was called dead that should not have been. I was told by someone in attendance that there were several defenders in front of Lynch that would have (presumably) tackled him to prevent a TD. The same cannot be said for this play that was called dead when Derek Carr clearly fumbled the ball, which was then recovered and would have been returned for a TD by the Browns defense. The fact that Carr was considered to have his forward momentum stopped before he fumbled the ball is, at minimum, laughable. Don’t worry Browns fans, the NFL also took responsibility for getting this potential game-winning play wrong too.

This one, however, the NFL claims was the correct call. Maybe it was. I don’t think it was but I’m not too proud to admit that my bias might be impacting my decision. The issue with this sequence of events is the claim there was “incontrovertible visual evidence” to overturn a spot by 2 or 3 INCHES. That phrase “incontrovertible visual evidence” comes straight from the NFL rule book. Unless you have a tape measure and level, there is no convincing me that “incontrovertible visual evidence” can exist to make a correction of 2 or 3 inches. The call on the field should not have been overturned. During the Ravens/Steelers game on Sunday Night Football that week there was a similar play where, I think the Steelers, were considering challenging a spot on the field. To which Al Michaels commented, “You can challenge [the spot] but how are you going to win one that’s 6 inches?”. The answer to this question is simple: play against the Browns. 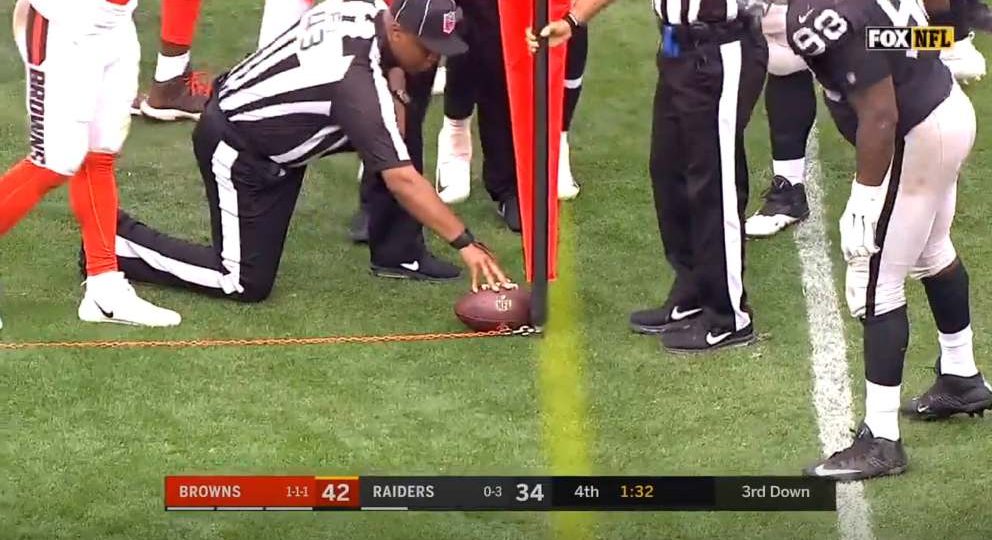 In back to back weeks of horrid NFL officiating, we relive 2 plays where everyone in the stadium and the millions of fans watching see a penalty but the 7 referees paid to see them don’t. Including TWO, both the line judge and the head linesman, who stand on opposite sides of the field staring down the line of scrimmage!

There was a point in time during this game where the Browns had 10 accepted penalties and the Ravens have ZERO. That’s right. In a sport where the cliche saying is “there’s holding on every play”, the Ravens went almost an entire game without committing a penalty. At least, none that were actually called. This obvious false start shows us the Ravens left tackle take a full 2 steps backwards in anticipation of a Myles Garrett pass rush.

Every single person watching the game saw it happen in real time, but the officials designated to watch the movement of the offensive and defensive lines somehow did not. Unfortunately I could not find a video or GIF of this particular incident, but I assure you, it happened.

The most ridiculous no-call penalty committed against the Browns was the mugging WR Jarvis Landry received running a “Go-Route” on a 4th and 5 late in the game. Baker Mayfield threw the ball to where Landry was suppose to be. Unfortunately for him, about 7 yards past the line of scrimmage Landry was laid out by a Ravens DB. It was blatant. It was obvious. It was not called.

The officials deemed the ball to be uncatchable. And they were absolutely right, it WAS uncatchable…because the 2 Ravens tackled Landry at the beginning of his route! The illegal contact committed by the defender prevented Landry from having the opportunity to make a play on the ball. That is a penalty. A defensive player is not allowed to tackle a WR during his route, period. It’s against the rules. Landry was objectively tackled, the pass was subjectively uncatchable. Call the penalty.

Wtf…. What do the refs have against this team? #Browns pic.twitter.com/OcBcObFotw

This is the only game this year that I don’t blame on the officiating. That is not because they started doing their job well. It’s because the Browns played their worst game of the season and didn’t deserve to win this game despite the blown calls. Just like with the Ravens game, there was an egregiously obvious false start on the Chargers left tackle.

This very play resulted in another Chargers TD. I remind you, there is an official whose job it is to watch for movement on the offensive line. How does something this obvious not get called – in back to back weeks. It stops being a coincidence at some point.

It’s hard to argue with the absurdness of the officiating in these instances. Had the officials merely called the penalties that were penalties and not called the ones that weren’t, the Cleveland Browns would be 4-1. An unstoppable juggernaut destined for playoff greatness. Whatever it is, they clearly do not want the Browns to be great and are using the only weapon they have formed that can stop them: the officiating.

My guess is that the NFL knows this is Tom Brady’s last year and they know the only thing standing between Tom Brady and going out on top is just one team: the Cleveland Browns. Keep the Browns out of the playoffs and they keep their storybook ending for the man who has been the face of the NFL for 10 years.

Either that or the officiating is just abhorrent. 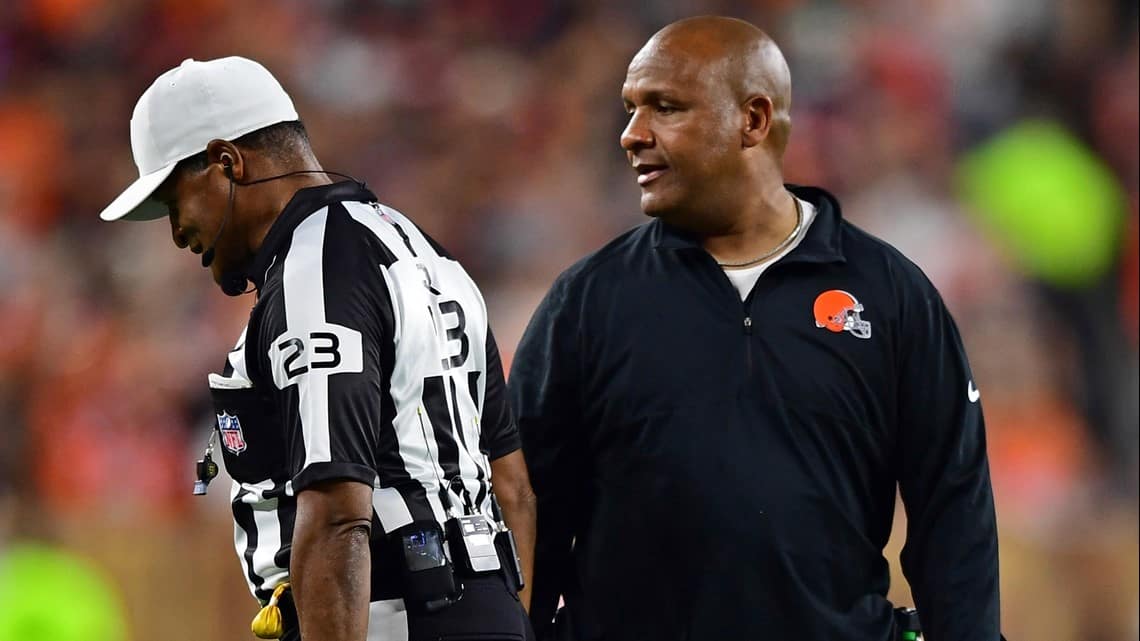