The Washington Wizards fell 113-112 to the Miami Heat on Thursday night. The Wizards held a very slim lead throughout the 4th quarter but ultimately, it was Kelly Olynyk who broke Washington’s hearts once again. Flashbacks of Game 7 instantly ran through every Wizards fan after that basket. John Wall attempted a lob pass with 0.2 seconds left but it was tipped by the Heat which led to a win. Ultimately, it was a very tough loss that will sting both players and fans throughout the night and into the early hours of the morning.

However, it wasn’t all doom and gloom. Early on, the Wizards looked by far the better team and were taking it to Miami. John Wall began the game in midseason form through a layup which looked like the John Wall Wizards fans know of. Washington played with a lot of effort and energy early on but as we got to the end, it did not look like the fiery team in the first half. Miami came out battling in the third quarter and hung close with Washington and then won thanks to heroics from Kelly Olynyk.

John Wall had a very good game. He accounted for 26 points, 9 assists and 3 blocks, unusual for a player his size. Wall was also responsible for many plays that were made early on and provided a very positive impact early on. Bradley Beal had 20 points and shot 7-16 from the field. Jeff Green was also a very solid contributor, scoring 17 points, grabbing 4 rebounds and blocking 2 shots. He had a great game playing starters minutes and made a huge impact coming off the bench. So, there were positives from a few players.

Scott Brooks said he wanted the Wizards to shoot more three-pointers this season and Markieff Morris answered the call by knocking down two threes in the first quarter as Washington jumped out to a quick 17-6 lead. But as we’ve become accustomed to with Brooks, he went with the dreaded all-bench lineup that brought the Wizards’ offense to a halt as Miami trimmed the lead to one, 25-24 after the first quarter.

Brooks then went with reserves until the 8-minute mark of the second quarter. Those minutes were very poor from the bench. Poor defensive effort, missed free throws, and a slew of fouls allowed Miami to hang around. Even with all the mistakes, the Wizards somehow led 59-58 at halftime.

The poor play carried over into the third quarter as the Heat opened up the quarter with a 7-0 run to take a 69-62 lead. Midway through the third, Jason Smith and Hassan Whiteside dove for a loose ball which led to a jumpball. John Wall then picked up a technical for swiping the ball away from Smith. He did it because what good is a Wizards game without a technical foul?

Why, Kelly Olynyk, why?

Washington bounced back with a 10-0 run and regained the lead, 87-85 after three quarters. The teams traded baskets during the fourth but the Heat came up with the big plays when they counted. They also pulled down the big rebounds (Kelly Olynyk’s putback) and Miami also hit their free-throws.

The Wizards were outrebounded badly today, 55-40 which led to many second-chance points from the Miami Heat. They outshot the Heat from the field but you cannot win a game when you give up 22 offensive rebounds. Kelly Olynyk was part of that last offensive rebound.

Overall, it was a very exciting game even though it ended the wrong way. Wizards fans will continue to hate Kelly Olynyk but they should be proud of their showing today. They had good performances from Wall and Beal, 43 bench points and shot 47% from the field. 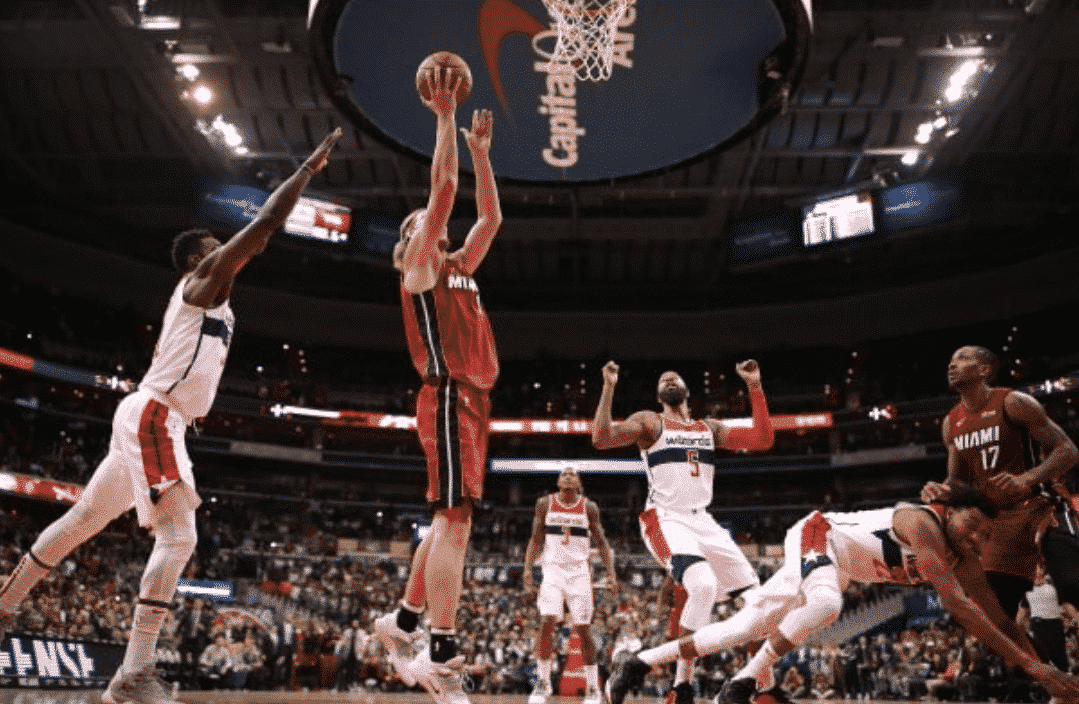