Pierre Gasly is one of Formula 1’s many talents. The 25 year old French international has already spent 5 years in the F1 industry and has had one of the most emotional rollercoasters of a career already.

Pierre’s maiden season in Formula 1 was in 2017. He made his debut at the Malaysian Grand Prix where he finished 15th in the Toro Rosso, Gasly still drives for the Toro Rosso however, it is now labelled as Alpha Tauri.

Pierre would end the 2018 season scoring 29 points in the Drivers Championship and proving to the doubters that he had some serious skill to show off.

After Gasly’s first appearance in the Toro Rosso, it had seemed he had proven enough to persuade the team to give him a full season in F1 and see how he’d do. In the second race of the 2018 season, Gasly managed to score a P4 in Bahrain which was phenomenal considering the car he was in, later on in the season he would then go on to get P6 at the Hungaroring which would end up being his second-best result of the season.

Seeing how much of an incredible season Gasly had in 2018, Red Bull decided to promote him in replacement for the departing Daniel Ricciardo. At this time Gasly was over the moon. He had just been promoted from ‘Red Bull’s sister team’ after only 21 race and was now in a car that he could realistically challenge the high end of the grid with.

Unfortunately, everything went horribly wrong for Pierre. He started his season by finishing out of the points in Melbourne and then went on to get P8 in his next race, which was at Bahrain. His best result came at the British Grand Prix where he got P4 however, that wasn’t enough to satisfy Red Bulls standards.

Gasly had raced 12 times in the Red Bull scoring 63 points before he was kicked off and replaced by rookie Alex Albon. People were livid with Red Bull’s decision on getting rid of Gasly so quick and not giving him enough time to adapt to the Red Bull car and really show his full talent for the team.

Especially since Alex Albon had only made 12 appearances in F1 and scored 16 points! Apparently, this appeared to Red Bull that he deserved a chance in the seat in replacement for Pierre, so for the Belgium Grand Prix Gasly made his return to Toro Rosso.

The Heartbreaking Death That Silenced Motorsport

Anthoine Hubert. Anthoine Hubert was a massive part of Gasly’s career, they had grown up together as best friends and raced in Karting together, they had both shared a dream of one day driving in F1. Pierre had obviously got into Formula 1 relatively early while Hubert was still in F2. However, he had beyond the amount of talent it took to be in the sport and could potentially become a World Championship one day.

Gasly also spoke on how Anthoine had sent him a message saying “Prove everybody wrong and show them your skills and talent” after he had been demoted from Red Bull in order to keep his head up and keep on pushing.

Anthoine Hubert’s life was tragically taken away on 31st August 2019. He had been involved in a collision in F2 going through Raidillon in Belgium which saw him crash into a barrier before then being hit by another car causing his death.

The accident had shocked the world of Motorsport and influenced many things, the safety of Motorsport since then has been increased and improved for the better.

The Return Of Pierre Gasly

The comeback and re-birth of Gasly started as soon as he was demoted from Red Bull. As he was demoted halfway through the 2019 season he had the remaining of it to prove who he was… and he did just that. In Brazil 2019 Gasly scored a shock podium where he scored 2nd place. Contact on the last lap between Lewis Hamilton and Alex Albon saw the Frenchman slip through and fight Hamilton to the line for 2nd.

It was a moment of relief. He’d managed to prove everybody wrong and show them he could fight for a top 3 position, he just needed to be given time which unfortunately Red Bull did not give him.

In the 2020 season, Gasly managed to have his breakthrough season. He scored 75 points in the Drivers Championship which was incredible considering he was in a ‘midfield car’ which never really had any right to be up there, fighting on the high end of the grid, the only way such performances could be extracted out the car were by immense levels of talent.

By far the highlight of the 2020 season for Pierre, and potentially the F1 2020 season in general, was the Italian Grand Prix. Due to a series of events in the race such as a Red Flag and Pit Lane drama, Pierre saw himself in a battle with Carlos Sainz for a race win. The Frenchman had to defend from Sainz for multiple laps and despite Carlos being in a better car, Gasly managed to hold him off and get his first-ever F1 Win.

The race win had given Pierre a huge amount of confidence and he’d shown to the world once again that he is a driver with a serious amount of talent on his hands.

Gasly hopped to continue this form into the 2021 season which so far he has shown, with him scoring a 3rd place Podium at Azerbaijan. And continue to bring out the best performances in the Alpha Tauri which has seen some major upgrades since last year.

Pierre’s future is not written anywhere, with his contract at Alpha Tauri being until 2023 his career and future is mysterious. We could potentially see Gasly have a return to Red Bull and finish the work that he had started, or leave the Red Bull driver academy and see his future at another team. However, Gasly is currently focused at Alpha Tauri and is looking to get more solid results under his belt.

Only time will tell with Pierre’s future, hopefully, one day us fans will be able to witness Gasly’s full potential on the racetrack. 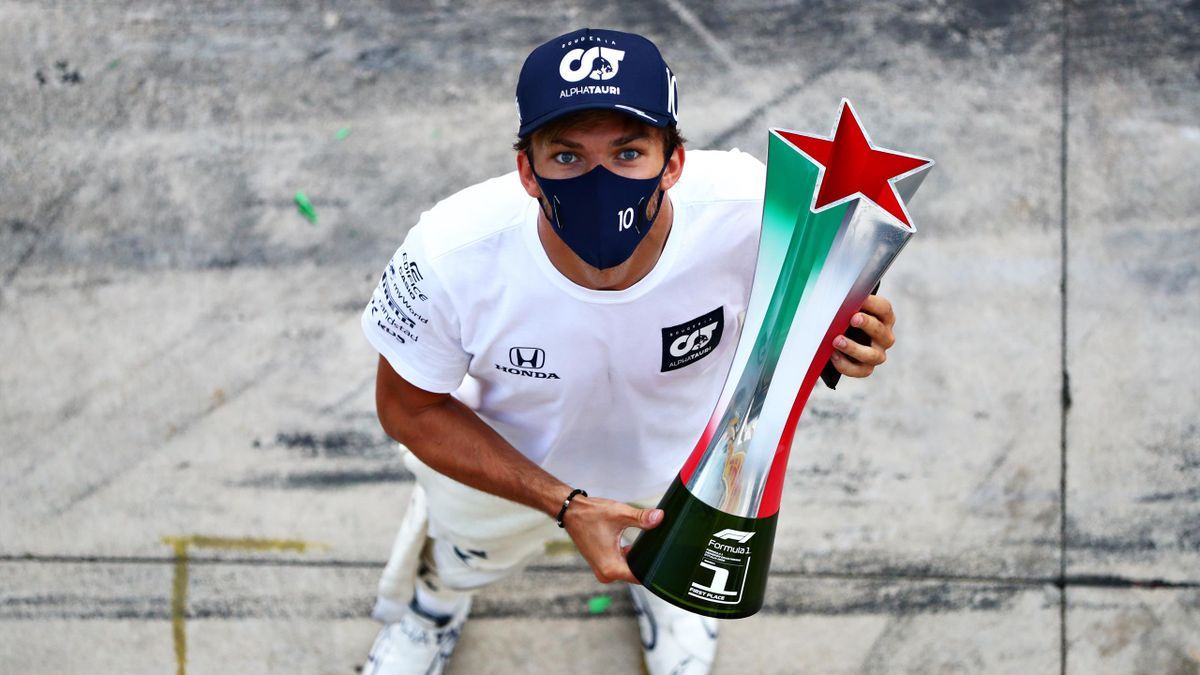